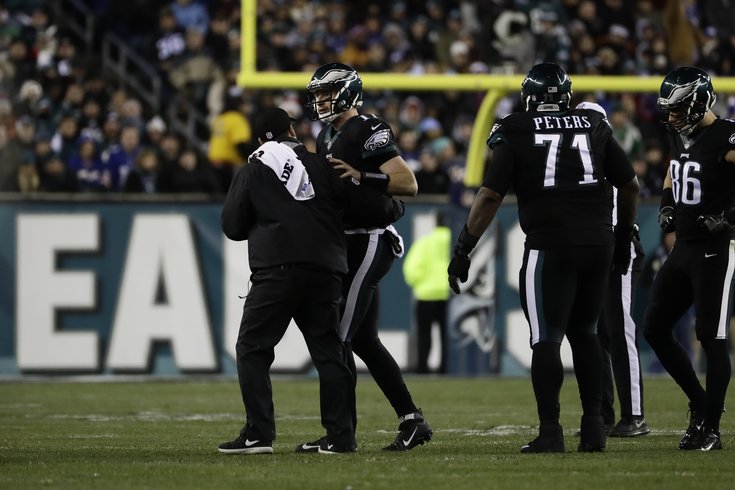 Philadelphia Eagles' Carson Wentz is helped off the field during the second half.

Things were going so well for the Philadelphia Eagles on Thursday night. And then all the sudden, a wave of panic washed over Eagles fans.

With the Birds up 21-16 late in the third quarter of Thursday night's win over the New York Giants, Carson Wentz was thrown to the ground by defensive end Olivier Vernon after an incompletion on third down.

Roughing the quarterback penalty moves the chains on a 3rd-and-13, but knocks Wentz out of the game @AdrianFedkiw pic.twitter.com/NtAD1G0tK7

“It was a screen play and [Darren] Sproles didn’t get out there, so I just tried to throw it away," Wentz said. "I was taken to the ground pretty hard and landed on my head. I got up and was a little dizzy. I got my bell rung a little bit, but then I got to the bench and I was feeling good. I had to go in and do the [concussion] protocol, but I passed all of that and got to come back in.”

Vernon was hit with a 15-yard roughing the passer call, but the damage could be much worse for the Eagles.

Wentz was taken out of the game -- actually, he said he first directed to the sideline by left tackle Jason Peters -- and replaced by backup Chase Daniel, who got the Birds down to the one-yard line on the drive. But the Eagles came up short on fourth and goal.

On their next drive, Wentz was back on the field after passing the NFL's concussion protocol.

While fans may have been worried, the rookie quarterback said he was confident he'd return to the game, which is why he jogged to the locker room rather than walked.

“I knew once I got to the bench I was feeling pretty good again," Wentz said, adding that the only concussion he's ever suffered was in high school. "I came in [to the locker room], and like I said, I passed all the tests with flying colors.”

He felt so good, in fact, that he was able to do things like this:

But when he was out in front of Nelson Agholor on a double-reverse, throwing blocks at Giants defenders, all Eagles fans could do was hold their breath. Again.

“If there was anyone out in front there, I was going to go pick up a block," Wentz said. "When I was cleared [from concussion protocol], I was ready to go. It didn’t really affect me and it didn’t affect my decision making in doing that. Once you are cleared, you’re good to go.”

Head coach Doug Pederson said he didn't talk to Wentz about his decision to try to block on the play, but he wasn't surprised that Wentz was able to return either.

"Obviously he’s a tough kid and we wanted to make sure that he was clear and okay with the doctors and everything. They went through the protocol and everything checked out good.”

It was tough play, sure, even if it bordered on reckless abandon. And because he was able to avoid any serious injury, it will likely be remembered less for the risk it carried and more for way in which it was executed by the rookie.

“They love hard work and they love winning," Wentz said of Eagles fans. "That’s the biggest thing and I’m the same way. I hate to lose.

"If you’re not working hard, I don’t really tolerate it either. So I think it’s a great fit for me.”