Eagles quotables: The best of training camp so far

From the inspirational to the analytical to the comical, the best player quotes from training camp after a week 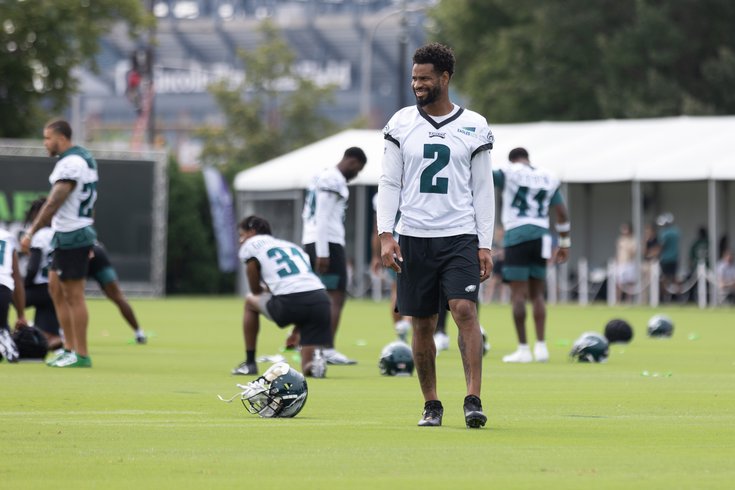 We're a week into Eagles training camp and finally got an extended look at a team that has high expectations set for it heading into 2022.

But any day at training camp is a tale of two halves.

The first is seeing the players in action through the actual practice – see Jimmy Kempski's daily observations and/or Shamus Clancy's Jalen Hurts Watch.

The second is what the players say afterward.

Back at OTAs, we introduced a series called "Eagles Quotables," where we tried to highlight the players' and coaches' best quotes in an, admittedly, rather slow point in the NFL offseason.

But now that camp is in full swing, hype is picking up for a new season, and players are speaking every day, we figured it might be time to give Quotables another go.

So without further ado, here are some of the Eagles' best quotes from training camp so far....

"[It's a] new appreciation from being gone and now having another opportunity to be back out here with the Philadelphia Eagles. We have a good team. I want to take full advantage of every day we get to spend together because we got something special, but we got to put that work in every day. It's not just gonna come to us because of what it says on paper." – Brandon Graham on coming back from last season's Achilles tear.

"Every day we go to work, we worry about what's at hand, but we don't forget where we come from too. We don't forget what we overcame. We don't forget how we ended it. But in the end we still have the same feeling of hunger, and I know hungry dogs run faster." – Jalen Hurts on the highs and lows from last season and a famous saying from the past.

"There's always big expectations. When you play in the city of Philly, every year the expectations are the same. This city, they want you to win." – Fletcher Cox on the constant expectations of playing in Philly

"Just having fun. I mean they said the guardian caps add 20 percent protection. I figured the bubble wrap gave me another 2 or 3, so." – Jason Kelce on the new guardian caps for linemen.

"Just looking at this roster, it's just a bunch of dogs on both sides of the ball. I just remember playing against them last year, it was one of those ice bag games. A team like that, just physical, that's something you love as a football player." – Jaquiski Tartt on joining the Eagles.

"Shoot, our first year...Our first year, we weren't good [laughs], the two of us going against each other. Now we're just so much more refined and we can pretty much learn from each other every time we go against each other. I can't ask for a better practice guy, honestly. I've been with him for five years now. – Josh Sweat on developing with Jordan Mailata the past few years in camp.

"Easy...It's easy. Just for me, it's like...I know that being an international player, there's always going to be that chip on my shoulder. People aren't gonna respect me, so I gotta prove it every day. I gotta earn it every day. Every day you gotta make daily deposits." – Jordan Mailata on how he stays driven.

"I definitely feel the love. Ever since I've been here in Philly, the city's been showing me love and I appreciate it wholeheartedly. Now it's my job to go do what I do, have fun, and play some football." – A.J. Brown on the fanfare in Philly