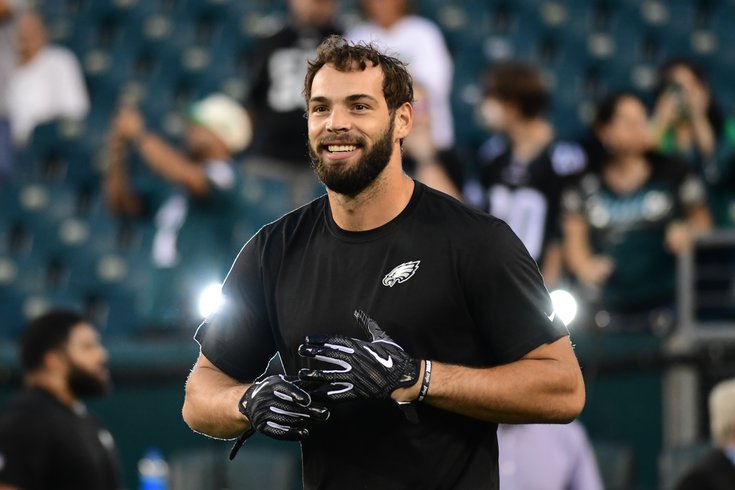 Dallas Goedert in currently third in the NFL among tight ends with 142 receiving yards.

In their Week 2 win over the Minnesota Vikings, the Philadelphia Eagles played 73 snaps on offense, and 61 on defense. Let's just get right to the snap counts, and some notes.

Analysis: Hurts lit up the Vikings' soft zone defense all night, and made plays with his legs. The Eagles put up 24 points in the first half, and while they didn't score in the second half, Hurts still played well. The Eagles' second half drives:

This was the best performance of Hurts' young career.

Analysis: On a night in which the Eagles' passing game was in high gear, they also did damage on the ground:

Gainwell had a bad drop deep in Eagles territory that led to an INT. He's lucky that Darius Slay was able to bail him out with an INT of his own on the Vikings' ensuing possession.

Analysis: As we noted in our 10 awards from this game, Hurts spread it around on Monday night after leaning heavily on A.J. Brown Week 1.

It'll be a juggling act for Nick Sirianni, Shane Steichen, and Hurts trying to feed all the mouths in the Eagles' offense. On Monday night, everyone at least got a taste.

It felt a lot like the Eagles were going to involve Smith as early as possible after he finished with zero catches Week 1, and sure enough, they did, as they opened with a short pass to him for 5 yards. I think that's smart, by the way.

Analysis: A season ago, Dallas Goedert was fifth in the NFL in yards per target:

To be clear, that's fifth in targets among all players, not just tight ends. His outstanding efficiency has carried over into 2022, as he is averaging 14.2 yards per target after two games. He is third among tight ends behind Travis Kelce and Mark Andrews with 142 receiving yards.

Analysis: The O-line committed a bunch of penalties, but they also gave Hurts plenty of time to throw, and they opened up holes in the run game. The Eagles have to get their timing issues cleaned up on RPOs with officials calling illegal man downfield penalties tightly these days.

Analysis: The Eagles sacked Kirk Cousins twice, and they had a third negated by a Sweat facemask penalty. Otherwise, they did a nice job pressuring Cousins into some dumb throws. The Vikings' rushing attack was also non-existent, as Dalvin Cook and Alexander Mattison combined for 8 carries for 25 yards.

Analysis: The Eagles might actually have themselves a good linebacker duo in Edwards and White. Both players were around the ball all night, and Edwards stood out at times with some physical tackles.

Analysis: Slay was an absolute stud whenever he was matched up with Justin Jefferson, who was held to 6 catches for 48 yards on 12 targets. That would be 4.0 yards per target. Maddox also made an athletic leaping catch for an INT. Bradberry had a glaring missed tackle for the second straight week, and Gardner-Johnson was out of position on a deep ball to Irv Smith, but was lucky that Smith dropped the pass.