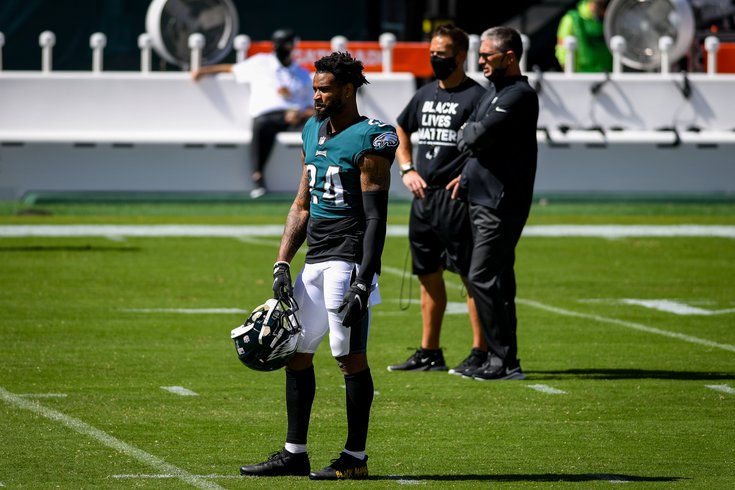 Darius Slay before the Philadelphia Eagles game against the LA Rams at Lincoln Financial Field in Philadelphia on September 20, 2020.

For the zillionth straight offseason, the Philadelphia Eagles will be looking for help at cornerback, after a 2020 season in which they fielded Darius Slay and a bunch of slot corners. Here we'll look at which corners will stay, and which ones will go.

No. 1 receivers absolutely wrecked the Eagles' defense in 2019, and as a response the team acquired Slay in a trade during the 2020 offseason to stop the bleeding. Slay traveled with the opposing offense's best receiver all season long, and save for a pair of bad performances against DK Metcalf (10-177-0) and Davante Adams (10-121-2), he was at least able to slow them down.

The obvious answer, in my view, in option 2, given that Slay is now 30 years old on a rebuilding team. The Eagles are going to have to restructure a number of veteran contracts just to get under the cap in 2021. In doing so, they're going to be committing to players for extra years when they otherwise likely wouldn't. As we noted in our "stay or go DE" post, Brandon Graham is one such "lesser of all evils" to keep around for a few extra years. Slay is probably another.

#JimmyVerdict: A trade of Slay would save $6 million, but I can't imagine another team being super eager to take on his contract while also giving up something to get him. Don't be surprised if the Eagles re-do Slay's deal, and commit to him long term for cap relief in 2021. Stay.

#JimmyVerdict: Maddox can perhaps return to the slot and be effective there, but at 5'9, 184, he's not an outside corner. Stay.

Robey-Coleman couldn't tackle. He missed 10 tackles on 54 tackle attempts, meaning he missed 18.5 percent of his tackles, according to pro-football-reference.com. He also couldn't cover. He allowed 41 completions on 52 pass attempts (78.8%) for 490 yards (9.4 yards per target) and 3 TDs. Opposing quarterbacks had a 125.2 QB rating when they threw his way. On the season, he had one pass breakup and no INTs.

With Maddox likely moving back to the slot, LeBlanc would be a slot corner backup only. He'll turn 27 this offseason, and may not even be what the new defensive staff is looking for.

James is still young (he'll be 25 in April), and he was probably the Eagles' best special teamer, though he only stayed healthy for four games in 2020. He's a gunner on the punt team, the jammer on the punt return team, he covers kicks, and he's an OK backup at corner.

Poor Michael Jacquet. He was an undrafted rookie free agent forced into a starting role late in the season, and he got absolutely abused by the Cowboys' passing attack. After he got benched in that game, the FOX crew put a graphic on the screen that said he gave up 7 catches for 182 yards on 9 targets. Yeesh.

On the bright side, he battled against the Cardinals' receivers, he has good size, and he's worth developing.