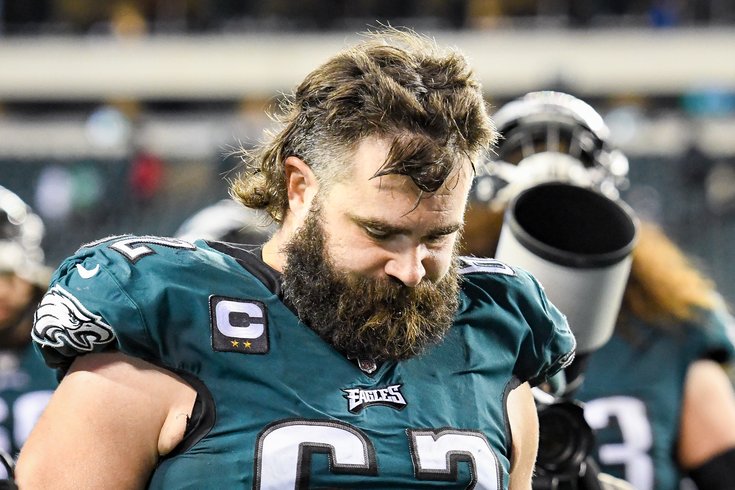 Jason Kelce walks off the field after the Philadelphia Eagles wild-card loss to the Seattle Seahawks.

A report emerged last offseason (a year and two days ago, actually) that Kelce was mulling retirement, a notion that Kelce himself acknowledged. Shortly thereafter, perhaps partly to keep him from retiring, the Eagles gave Kelce what was reported at the time as the richest center contract in the NFL.

Kelce has been the NFL's First-Team All-Pro center for three straight years now, and is inching closer to Hall of Fame status. Though he will turn 33 during the 2020 season, he is still playing at a high level, though it is maybe worth noting that he and his wife had their first baby in October.

I won't pretend to know if Kelce is going to retire or not this offseason, but (a) the longer we go without hearing something, the more likely it is that he'll return, and (b) he has more money to play for than he did when the retirement report came out last year.

#JimmyVerdict: Stay, if he doesn't retire.

Brooks suffered a season-ending shoulder injury in the Eagles' NFC East-clinching Week 17 win over the Giants. During "locker room clean-out day," Brooks said that he would have surgery (scheduled for last Thursday), which he will rehab in San Diego for a couple months, and be back in Philly to continue his rehab sometime around the end of February.

Brooks believes that he will be good to go for the start of training camp. In Brooks' case, we can probably go ahead and take him at his word, seeing as he spent the entirety of the 2019 offseason rehabbing his Achilles tear, and was amazingly able to start Week 1.

There's a decent argument to be made that Brooks was the best guard in the NFL in 2019. He'll turn 31 in August, but like Kelce, he's playing at a very high level.

Seumalo played one of the worst games I've ever seen an NFL offensive lineman play back in Week 2 against the Falcons. That could have derailed his season, but Seumalo bounced back and ended up having a pretty good season. He has solidified the LG spot, and his center-guard versatility could be valuable, given Kelce's uncertain future with the team.

At some point this offseason when I'm really hurting for story ideas, I'll take a hard look at Pryor's games in Week 12 vs. Seattle, Week 17 vs. the Giants, and the playoff game against Seattle. Without having done that, while the Eagles certainly missed Brooks, it felt like Pryor held his own in those games at RG.

The Eagles have been cross-training Pryor at RG and RT since he was drafted, and more recently, some work at LG as well. Pryor will be heading into his third season with the Eagles in 2020, and may finally step into a role as the first guard off of the bench, and perhaps even at RT, with Halapoulivaati Vaitai potentially moving on to another team in free agency.

Herbig spent the entire season on the Eagles' active roster, but he was rarely active on game day. He'll be back in camp in 2020, but will have to continue to earn his roster spot.

Opeta spent most of the season on the practice squad, but was promoted when another team tried to poach him. Opeta is an interesting prospect, as he is a weight room freak with some intriguing physical measurables:

He'll be back in camp again, with a chance to win a roster spot.