With John DeFilippo out as Jags OC, would he make sense for Eagles? 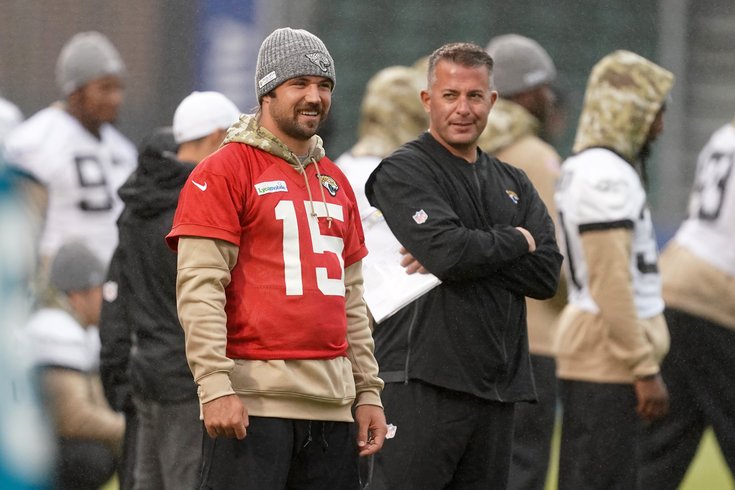 Last week, the Philadelphia Eagles let go of offensive coordinator Mike Groh (and wide receivers coach Carson Walch) just a day after Doug Pederson offered a ringing endorsement of the pair. Now, the Birds are in the market for replacements — and in a way in a race against the other teams with OC vacancies — to fill the top offensive job on the team, aside from Doug Pederson, of course, as he still calls the plays in Philly.

On Monday morning, an interesting name popped up as possible replacement for Groh. As first reported by Ian Rapoport, the Jacksonville Jaguars are parting ways with offensive coordinator John DeFilippo, who spent two years in the Eagles organization as quarterbacks coach before leaving to take the offensive coordinator job in Minnesota following Philly's win in Super Bowl LII.

DeFilippo, a Radnor High graduate, was let go by Minnesota in 2018 after the team's Week 14 loss to the Seahawks, and was hired by the Jaguars last offseason to run their offense, where he was later reunited with former Eagles quarterback Nick Foles. However, after a Foles injury and an up-and-down season for backup and brief rookie sensation Gardner Minshew, Flip is back looking for work.

So what makes him a possible replacement for Groh? Well, for starters, there was a thought that he was a candidate for the Eagles job back in 2018 before he took the Vikings gig. He accepted that job before then-offensive coordinator Frank Reich was hired as the Colts head coach, creating the vacancy that was eventually filled by Groh.

Then there's what he was able to do for Wentz during his two seasons as the Eagles QB coach. After a predictably rocky rookie campaign for Wentz, the Birds thought so much of Flip that owner Jeffrey Lurie reportedly blocked him from being interviewed by the Jets. And it worked, because the following season, Flip helped Wentz to his best season to date as a pro before Wentz' season-ending (and career-trajectory altering) knee injury.

During that MVP-caliber campaign, Wentz throw for 33 touchdowns and just seven interceptions while leading the Eagles to an 11-2 start before Nick Foles was forced into action following the injury. From there, DeFilippo helped Reich and Pederson flip the script to better suit Foles, who went on to play the best football of his career in the playoffs and lead the Eagles to their first Super Bowl in franchise history.

There are, however, some possible hiccups to DeFilippo returning to the Eagles. For starters, he would have to give up the play-calling control he had in his last two stops.

To return to Philly, DeFilippo would have to be OK with giving up play calling. He may have no choice - unless he wants to take some time off - as there aren’t many of those openings left.

Still not sure if Doug Pederson wants to hire someone outside his comfort zone. https://t.co/J0GCkXt9fz

There's also the other coaches on the Eagles staff who Pederson might feel are up for a promotion, like Duce Staley, rather than bringing in someone from the outside — although an outside voice might be a welcome one at this point, even if Flip already has previous ties to the organization.

Then there's the fact that he was fired from his last two gigs within a year of being hired. Perhaps that's due to Flip struggling as a play caller, which could make the Eagles job enticing to the 41-year-old coaching free agent.

Either way, it would be worth it for the Eagles to take a long look at DeFilippo as they continue to search for their next offensive coordinator.

RELATED: DeFilippo reflects on 'gut-wrenching' decision to leave Eagles – and what he learned from Pederson