What they're saying: Lots of candidates for Eagles offensive coordinator, who is the right fit? 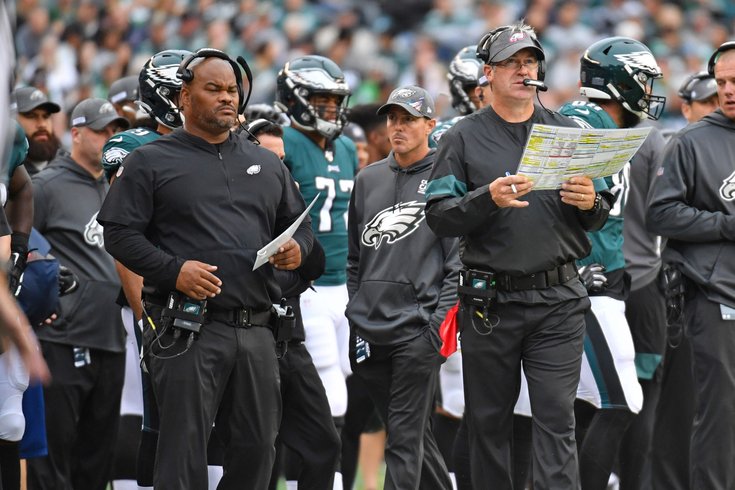 Duce Staley has been passed over for head coaching and offensive coordinator jobs three times in recent years.

The Eagles' offense will have a new look next season, as the team is currently shopping for a new offensive coordinator and wide receivers coach after firing Mike Groh and Carson Walch on Thursday.

We'll focus on the one most people are talking about — the OC.

Replacing Groh will be a tricky task, as this single hire will have a ripple effect on the team. Who will be making this decision? Well if you believe Doug Pederson, he is.

“This is what I appreciate from Mr. [Jeffrey] Lurie and Howie [Roseman] is that they’ve given me the opportunity to control my staff,” Pederson said in an interview on WIP Friday morning. “Do they want to be a part of the process? They do. They want to meet these people, they want to have input and they want to have conversations. But ultimately, I have to feel comfortable with these gentlemen on my staff. Because we’re the ones that work together and we’re with each other the most. Ultimately, it will be my decision.”

All over the internet, Eagles pundits and so-called experts weighed in on the candidates and gave their two cents on what direction the Birds should take. It's an opportunity, one might say, to adapt the offense to the ever-changing NFL.

And so, here's a look at what they're saying about the Eagles, offensive coordinator edition:

We'll start with the obvious here: Duce Staley. The running backs coach has had success with all different kinds of Eagles RBs, from LeGarrette Blount to Corey Clement to this season's successes in Boston Scott and Miles Sanders. A running backs coach is a more unconventional choice to run an offense, but as NBCSP's Reuben Frank argues, he's simply the right man for the job, regardless of his current responsibilities:

Staley isn’t just an innovative, knowledgeable offensive mind who has a long history with Pederson. He’s a master motivator. A terrific communicator. A positive force in the lives of all his players.

Look at the brilliant season Miles Sanders had and read his comments from last month about Duce.

You need someone to kick J.J. Arcega-Whiteside’s ass after another dropped pass? Duce won't hesitate.

You need someone to work endless hours into the night going over the gameplan with Carson Wentz? Duce is your guy.

You need someone to find new ways to deploy a unique talent like Boston Scott? I can’t think of anybody more qualified.

The NFL becomes more of a passing league every year, and that’s why these jobs generally go to quarterback coaches.

I just hope Staley’s history as a running back and a running backs coach doesn’t exclude him from this conversation.  [NBC Sports]

And now to a few outside candidates. If you believe ESPN's Tim McManus, former quarterbacks may be toward the top of the list (surprise surprise). Here's a bit on two potential hires:

Speaking of quarterbacks, a somewhat familiar name has worked his way onto the coaching scene at the tender age of 32. Would the Eagles target an up-and-comer like Mike Kafka? BGN listed him among their 13 possible candidates Thursday:

Kafka has served as the Kansas City Chiefs’ quarterbacks coach for the past two seasons. I’m not sure how much credit he really deserves for Patrick Mahomes being awesome but probably at least a little?

Kafka was previously a fourth-round pick by the Eagles in the 2010 NFL Draft. Pederson was his quarterbacks coach in 2011.  [Bleeding Green Nation]

Want an NFL head coaching gig? Well, the Eagles have proven to be a pretty good proving ground, as Reich and before that Pat Shurmur were hired after being OC's in Philly (and current DC Jim Schwartz is being interviewed to run the Browns). NJ.com's Mike Kaye lists three top candidates for the open gig, including Caldwell and Norv Turner, but it's his second coaching target that Eagles fans will no doubt find to be the most interesting:

Not long ago, Gruden was considered one of the brightest offensive play-callers in football. Despite his rough head-coaching stint in Washington, Gruden still has shown the ability to be creative with his play-calling. Like Reich, Gruden is a former quarterback and offensive coordinator. He can help Pederson design new plays and create new opportunities in the passing game.

Gruden, like Caldwell, probably wants to get another head-coaching job. With the success that the Eagles have had over the past few years, Gruden could get his next shot quickly after arriving in Philadelphia.  [NJ.com]

How much does it matter?

There might not be an NFL team for whom the identity of the offensive coordinator is less important to the success of the team. Bowen takes a look how much of an impact the new OC will actually have:

One thing we know is that as long as Doug Pederson is head coach, the team will run his offense, and presumably he will continue calling plays. That means the coordinator Pederson settles upon figures to be something of a sous chef. Maybe he advises a tweak here or there, brings in a concept from somewhere else he’s coached. But it’s Doug’s kitchen, and it isn’t changing themes from steakhouse to trattoria.

If Pederson were a defensive coach, getting rid of Groh on Thursday, along with wide receivers coach Carson Walch, would undoubtedly be a game-changer. New system for Carson Wentz to learn. Does the new OC want different personnel, different position coaches, a key to Pederson’s private ice cream locker in the cafeteria?

But as was the case with Frank Reich’s departure two years ago, we don’t really know what this means. After Reich went to Indianapolis and proved he was a pretty smart coach, while the Eagles offense lost pizzazz without him, we all brilliantly concluded Reich was more important to the Super Bowl than we’d realized.  [Inquirer.com]