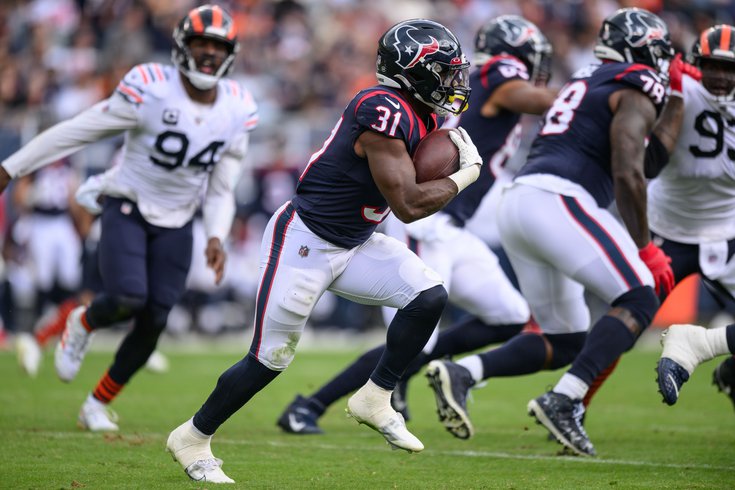 The Philadelphia Eagles are into an easy stretch of their schedule, as they'll travel on a short week to Houston to take on the 1-5-1 Texans after hosting the now 2-6 Pittsburgh Steelers on Sunday. Here are our five matchups to watch.

1) The Eagles' rushing attack vs. the Texans' run defense

The Texans can't stop the run.

Jonathan Taylor (31-161-1), Khalil Herbert (20-157-2), Josh Jacobs (20-143-3), and Derrick Henry (32-219-2) have all had monster games against the Texans this season. Week 8 against the Titans, The Texans simply couldn't stop Henry even though Malik Willis started at quarterback for Tennessee and the entire stadium knew the Titans were going to run it all day.

Derrick Henry with a Touchdown 🐘🔥 pic.twitter.com/IXkvqyh7iC

If Miles Sanders is on your fantasy football team, you should probably start him.

Anyway, allowing 186.0 rushing yards per game is, um, bad. A list of the worst run defenses of the last 20 years, and their respective records those seasons:

Two things on that chart above:

In summary, the Eagles should try to run the ball against the Texans.

The Texans have two rookie starters in their secondary in CB Derek Stingley (the No. 3 overall pick in 2022) and S Jalen Pitre (37th overall). Both of those guys are probably going to be very good NFL players, but for now there's some opportunity for Sirianni and the Eagles' offensive staff to take advantage of their youth and inexperience.

Pitre in particular has learned early on that receivers and running backs don't go down as easily in the NFL as they do in college, as pro-football-reference.com has him down for 10 missed tackles so far this season. The Eagles could have some yards after catch opportunities against him with A.J. Brown and Dallas Goedert.

One of the rare good things the Texans have going for them is the play of rookie running back Dameon Pierce, who has rushed 121 times for 539 yards (4.5 YPC) and 3 TDs this season.

Pierce didn't get as many opportunities as he should have while playing in a running back by committee offense in college at Florida. Over his four years in college, he only had 329 career carries, with a season high of 106. In 2021, he had 16 total TDs, and he was a standout during Senior Bowl practices. At 5'10, 218, Pierce has a low center of gravity. He has great balance, lateral agility, and tackle-breaking power. Because of his limited usage at Florida, Pierce fell to the fourth round, and he has been a steal for Houston.

One of the Eagles' biggest issues on the defensive side of the ball has been their tackling. They cannot have a bad tackling day against this dude:

We should probably note that the Eagles haven't exactly been stellar against the run this season either.

They just haven't had to stop the run very often because of the big leads they have gotten in every game. This would have been a good game to have a healthy Jordan Davis.

4) The Eagles' secondary vs. the Texans' short passing game

According to the NFL's NextGen stats, quarterback Davis Mills' average throw is 2.1 yards short of the sticks. That puts him in the company of dink-and-dunkers like Matt Ryan, Daniel Jones, Baker Mayfield, and Kirk Cousins. If you look at Mills' throw charts, he'll take some rare shots down the field (he has the arm strength to be dangerous down the field), but he typically lives near the line of scrimmage. If you look at his last three games, Mills has completed just five passes 10-20 yards down the field. This chart of Mills' throws against the Titans Week 8 is a good representation of his season so far: 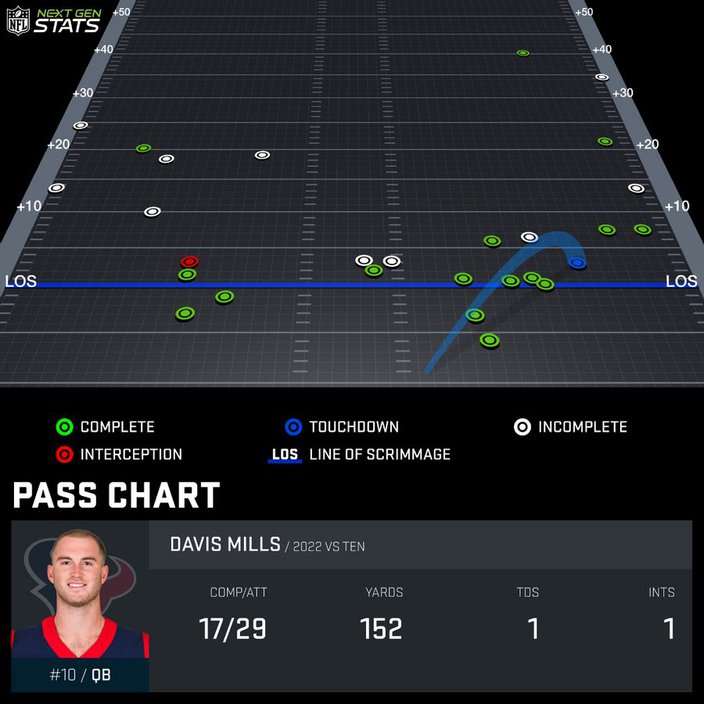 The Texans offense has not had much success in the intermediate part of the field. So once again, tackling will be important on those short throws.

Update: WRs Brandin Cooks (unhappy because he wasn't traded) and Nico Collins (groin) are both expected to be out Thursday night. The remaining WRs on the Texans' active roster:

5) Where could the Eagles' defensive line go feastin'?

The Texans actually have a nice pair of offensive tackles in Tunsil and Howard, and as a team they have only allowed 16 sacks on the season. Still, the interior of their offensive line has issues.

• Green is a rookie first-round pick (15th overall). He has struggled to start the season.
• Quessenberry was the backup center to start the season behind Justin Britt, who left the team due to personal reasons. Quessenberry has also struggled.
• Cann has been around a while, starting 100 games over his career, which was spent in Jacksonville from 2015-2021. He's a competent starter, but sort of a JAG ("just a guy").

The Eagles will be down an interior lineman in Davis, as noted above, but this could be a day in which guys like Javon Hargrave and Fletcher Cox can take advantages of matchups on the interior.