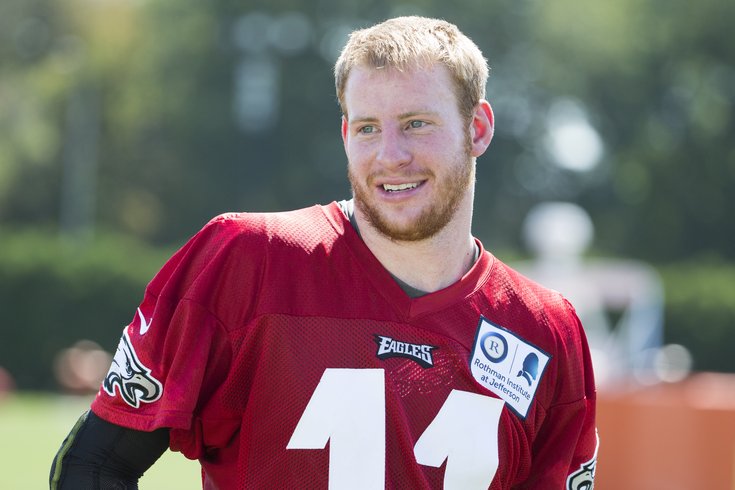 On the third and final day of the "rookie portion" of training camp, the few veterans in attendance got the day off. That would mean players like Sam Bradford, Chase Daniel, and Nolan Carroll, for example. And so, with the vets on the shelf, Carson Wentz got almost all the reps at quarterback today.

There were so few players practicing this morning, in fact, that fourth quarterback McLeod Bethel-Thompson played quarterback, running back and tight end. On one series, he made a catch down the seam, and then had to run back to the huddle, call a play, and run the next set of reps as the quarterback.

The action should pick up significantly tomorrow, but for now, an abbreviated version of practice notes:

• There were a number of times Wentz and his receivers weren't on the same page. For example, on one rep, Wentz attempted a back shoulder throw, but his receiver continued to sprint up the field. That's to be expected from a rookie quarterback and bunch of undrafted rookie receivers.

• Linebacker Myke Tavarres said he was around 225 pounds when he signed with the Eagles as an undrafted free agent. He has since bulked up to 240. Tavarres said that playing behind a wide-nine defense can be easy.

"What kind of makes it easy is that you have the front four, and they're going to set up and play their gaps, and really you have a choice between one or two gaps," he said. "Wherever the ball goes, you go to that closest gap. It's pretty simple."

For that reason, I believe that Mychal Kendricks will be a more effective defender playing a "downhill" style under Jim Schwartz than he was in a more "read and react" type of defense under Billy Davis.

• One standout from the first three days of camp has been CB Aaron Grymes. He has consistently made plays on the football every day. We wrote a little more in depth about Grymes yesterday.

• Isaac Seumalo has gotten work both at LG and C. Yesterday in team drills, an errant shotgun snap from Seumalo got past Wentz. Today he had another one during the individual periods.

• Rookie safety Blake Countess was wearing a camera on his helmet today. Doug Pederson explained why.

"Those are great devices to have," said Pederson. "In fact, we used them in Kansas City with the quarterbacks. We put them on their helmets before. It gives you the opportunity to see from the player's vantage point, to see where they're looking, where their eyes are. Are they looking in the right direction? Are they on the right reads? Defensively, are they in the right spots? And then you can evaluate and help correct the player."

The Eagles' sports science under Doug is definitely less sciencey than it was under Chip.

• Pederson acknowledged during his press conference that the Eagles did indeed have interest in Anquan Boldin, who signed with the Detroit Lions yesterday.