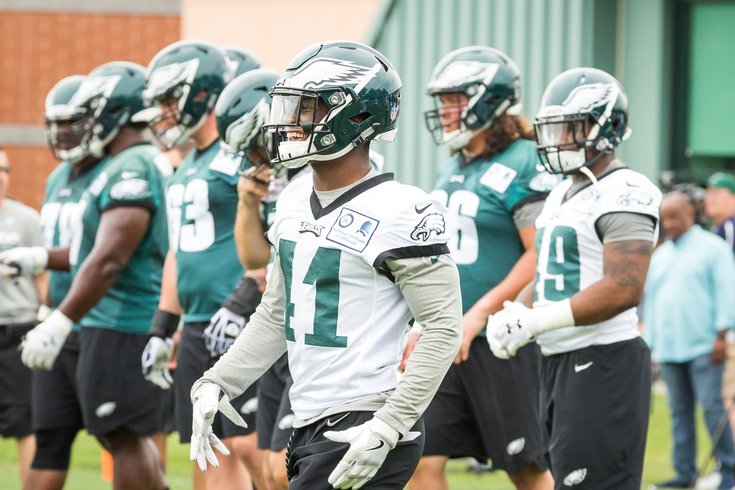 Jeremy Reaves during OTAs at the NovaCare Complex.

Today we'll take a look at the safeties.

Two notes before we get started:

He can play in the slot, deep middle, linebacker, and outside corner. There isn't a more versatile, movable piece in the Eagles' defense, and Jenkins is fast, tough, and physical. As an added bonus, he also serves as a leader on the field and in the locker room.

And yet, I feel like he's still kind of underappreciated. In my view, he is very clearly one of the top five safeties in the game on the field, and an invaluable locker room presence off of it.

While McLeod is a solid starting safety, he probably hasn't lived up to the five-year, $35 million contract he signed prior to the 2016 season. In his two seasons in Philly, McLeod has 130 tackles, 6 INT, 13 pass breakups, 2 forced fumbles, and a sack.

McLeod will form one of the best safety duos in the NFL once again this season with Jenkins, but a $9.9 million cap charge in 2019 leaves his long-term future with the team in question. McLeod should be motivated to have a great season so he can avoid becoming a cap casualty next offseason.

Sullivan had a reputation as a big hitter coming out of Shepherd University as an undrafted free agent last year. He lived up to that reputation, as he provided perhaps the most memorable moment of the preseason games with his vicious hit on Packers wide receiver Malachi Dupre. He also had another big hit against the Packers, jacking up a receiver running down the sideline, and he blew up a lead-blocking fullback against the Jets.

Sullivan landed on IR at the conclusion of training camp in 2017, and was waived with an injury settlement. The team later signed him back to the practice squad in November. If the season started today, Sullivan would probably be the team's third safety.

Reaves is a corner who moved to safety, so it makes sense that the Eagles would have interest, as Jim Schwartz loves safeties that have some cornerback experience in their backgrounds. Reaves was the Sun Belt's Defensive Player of the Year in 2017, filling up the stat sheet in the process. In 2017, he had 104 tackles (7 for loss), 1.5 sacks, 3 INT, 8 pass breakups, 3 forced fumbles, and 2 recoveries.

Reaves, like Sullivan above, is perhaps best known for being a big hitter. Here's his game last season against Oklahoma State's dominant offense. You'll see a couple a big smacks here, but more importantly, Reaves shows ability in coverage from the slot, and as a sound tackler in the run game.

Reaves was getting second team reps during the spring.

Neal is the little brother of former Packers edge rusher Mike Neal. The younger Neal is a defensive back with (guess what!) experience both at corner and safety in college.

Roberts is a smaller safety at 5'11, 186, without much in the way of big play production in college, though NFL.com did have him as a sixth- or seventh-round projection.