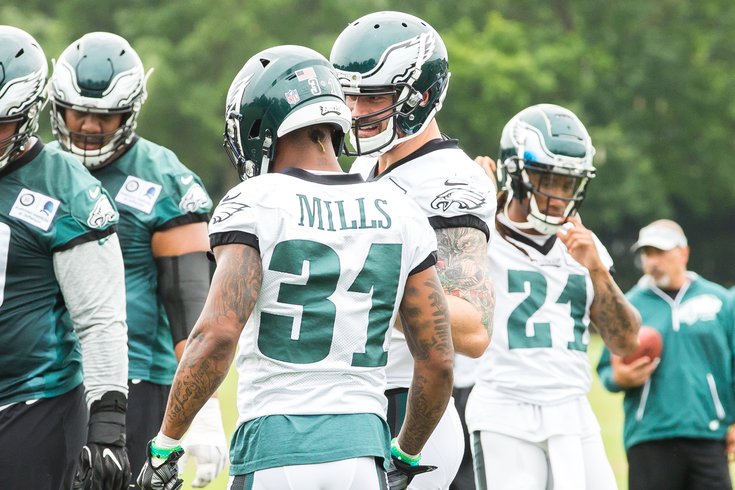 Jalen Mills during OTAs at the NovaCare Complex.

Today we'll take a look at the cornerbacks.

*To note, "nickel" should not be confused with "slot." I have no idea who will play the slot, and it's entirely possible that Jim Schwartz may simply try to implement a matchup strategy based on opposing personnel.

Mills still has his critics, but the reality is that he's a very important piece in the Eagles' defense. If the season started today, Mills would likely start on the outside and move into the slot in nickel. And you know what? He'd play like he thinks he's Darrelle Revis in his prime.

The Eagles have outside corners in numbers, but they completely lack experienced players in the slot. The improvement Mills showed from his rookie season to Year 2 in the NFL was significant, and the expectation here is that he will continue to get better.

At some point, moving Mills to safety might make some sense, but the Jim Schwartz favorite will be a starting corner once again in 2018.

Darby is a very interesting player to watch this offseason. The Eagles didn't trade for Darby until August 11 last year, a day after their first preseason game. As such, he missed most of training camp. He then promptly suffered what looked like a gruesome injury in the first game of the season against the Redskins, which kept him sidelined until Week 10 against the Cowboys.

Once healthy, Darby had an up and down season. He had a couple rough games, notably against the Giants Week 15, and he made some humongous plays, like the interception against the Raiders Week 16 that helped seal a win.

It's reasonable to expect bigger things from Darby in 2018 with a season under his belt in Schwartz's scheme, as well as a full training camp with the team, and a fully healthy knee.

At the same time, a trade of Darby would also make some sense, given the Eagles' robust depth at cornerback, along with the fact that Darby is entering the final year of his rookie contract and should be able to cash in next offseason.

After a year in which he sat out the first 15 games while recovering from a ruptured Achilles, Jones got an opportunity to play against the Cowboys in a meaningless Week 17 game, and showed some promise. In 2018, Jones will enter training camp with a chance to win a starting job.

By now, you all know the story. Jones ruptured his Achilles during his pro day leading up to the 2017 NFL Draft, which caused him to slip into the second round when he would have otherwise likely been the first or second cornerback to come off the board, perhaps within the first 10 picks.

Jones had a nice spring, though the team exercised caution by keeping him on the sidelines from time to time. If Jones can truly recover fully from his injury, he has a very high ceiling and could be an inexpensive starting corner for at least the next two years. Step one is making it through camp while showing that he belongs.

Douglas had a solid rookie season in 2017. He played 420 (40.7 percent) of the team's snaps and never looked like the moment was too big for him. He had 25 tackles, 2 INT, and an impressive 11 pass breakups. On this Eagles roster, Douglas is probably fourth in the pecking order behind Mills, Darby, and Jones, which speaks to their impressive depth.

While the team has a number of slot corner candidates, Douglas is not among them, as he is more of a classic big, outside corner. It will be interesting to see if Schwartz uses Douglas in a matchup role against bigger receivers, perhaps like Mike Evans of the Buccaneers, who the Eagles will see Week 2.

Bausby made a lot of plays during the spring, picking off passes and breaking them up. He was on the practice squad a year ago, and Schwartz had very nice praise for him back in May.

"He's a competitive player," said Schwartz. "He did a really good job for us on the scout teams last year. He was ready to play for us last year if need be. He did a great job not just on the practice field but in the meeting room, being up on the game plan. We were fortunate that we didn't have so many injuries there that he needed to go. But he was ready, and he had the confidence of the coaching staff. He sort of spread his wings a little bit, working in some different positions. He's a very, very competitive player. He's got good size, but his competitiveness stands out. You guys will see that.

"You didn't see him in training camp last year. You guys will see that in training camp this year. I'm excited about him. We're all excited about the contributions he made to our team last year, and what he can do this year. Again, his contributions were behind the scenes last year. But we have a lot of guys that have an impact on Sunday that might not be playing. He worked the offense hard last year. I think those guys have respect for him, and I know our coaches have respect for him."

Bausby will have a real opportunity to make the 53-man roster this year.

At 5'9, 184, Maddox projects to slot corner in the NFL. Despite his smaller size, Maddox is feisty and confident, which no doubt appeals to Schwartz.

In the NFC East, there are a number of small, shifty, talented slot receivers in the Giants' Sterling Shepard, the Redskins' Jamison Crowder, and the Cowboys' Cole Beasley (if you think he's still good, that is). As such, grabbing a slot corner in the fourth round to match up with shifty slot receivers makes sense.

Maddox has the athleticism to stick with those receivers.

Schwartz has shown the willingness to play rookie corners in the past, so I wouldn't rule out some kind of immediate role for Maddox, even with such a deep group at corner.

During the 2017 season, according to ESPN's Field Yates, the Eagles gave a pay raise to Killings, who was on the team's practice squad. As Yates noted, whenever teams do that, that's typically indicative of a team trying to sign a player to their 53-man roster.

If that was indeed the case, it is interesting that Killings chose to stick with the Eagles, albeit with a pay raise, but still only on the practice squad. He is probably best suited in the slot, and is perhaps a player that we shouldn't be sleeping on.

Goforth is a player with some corner/safety versatility who tore his ACL as an undrafted rookie free agent last training camp. He stuck on the roster all season on injured reserve, and will get another crack at training camp in 2018.

Sullivan was good enough to get an invite to play in the Senior Bowl this offseason after four years as a starter at Georgia State. He was also a Combine invite, where he ran a 4.6 40, so his ability to stick with faster receivers at the next level will be in question.

Eagles are spending a little guaranteed money on UDFAs: