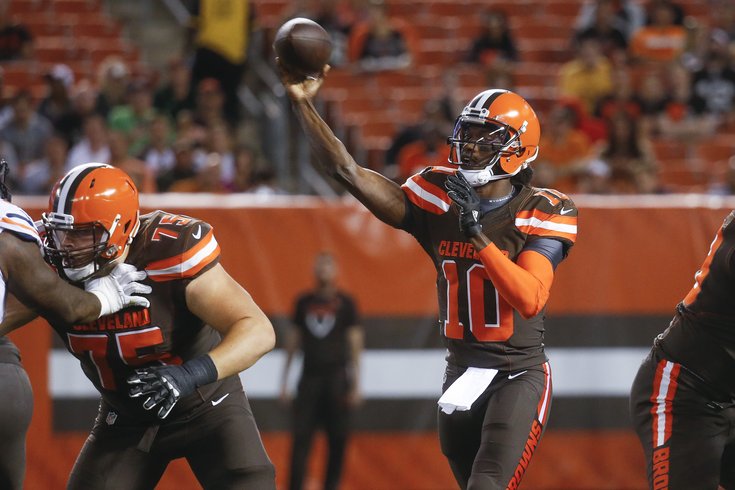 The last time the Eagles faced RG3, he put the final nail in Philly's 2014 coffin.

The Philadelphia Eagles have a big opportunity to start off the season with a win, as the lowly Cleveland Browns come to town Week 1. Here are five matchups to watch.

1) Carson Wentz vs a 'lit' stadium

Something I learned about Carson Wentz in watching his college games, his play at the Senior Bowl practices, OTAs, training camp, and even the one preseason game, is that he's not afraid to let it rip. Gone are the days where the Eagles endlessly throw short of the sticks on 3rd and 7. Wentz has a strong arm, he has the confidence to use it, and Doug Pederson is going to let him.

If you're expecting a "game manager" to make safe throws and rely on the defense win games, that won't be Wentz. He's going to make "wow plays" at times, and maybe just as often, he's going to make big mistakes.

When Wentz trots out onto the field for the first Eagles series Sunday, Lincoln Financial Field is going to be "lit," as the kids are saying these days. He's going to have to find a way to calm down, settle in, and just play football.

Robert Griffin III sat out the entirety of 2015, marooned on the Washington Redskins' inactive list. In games RG3 played the majority of the snaps in 2014, the Redskins went 1-6. He threw four TD passes on the season, was picked off 6 times, fumbled 9 times and was sacked 33 times. (Of course, that one win was the final nail in the Eagles' 2014 coffin).

When asked why he was sacked so often, Griffin said, "Just not getting the ball out. I've really focused on making sure I get the ball out. Protect your linemen, protect your team, don't get in negative down and distances, and everything else will take care of itself."

In Jim Schwartz's highly anticipated attack scheme, the Eagles' front four will get their first opportunity to get after one of the slowest decision-making quarterbacks in the NFL, although one rare area where the Browns do have quality talent is along their offensive line.

3) The Eagles' special teams vs the Browns' rookies

The Browns have a staggering number of rookies on their roster this season – 17, to be exact. That means that a minimum of 10 rookies will be active. They also have 11 players entering their second year in the league.

According to the depth charts at Ourlads.com, only two of the Browns' rookies – WR Corey Coleman and DE Emmanuel Ogbah – are projected to start. That means that a whole slew of inexperienced players are going to be playing on special teams.

Over the last two years, the Eagles have arguably had the best special teams units in the NFL, and they should have a major advantage against the Browns.

The Browns were 28th in the NFL in sacks last season, with 29 of them. Worse, their two sack leaders a year ago – Desmond Bryant (6 sacks) and Armonty Bryant (5.5 sacks) – will both be out.

In fact, here are the number of career sacks for each of the players in the Browns' projected starting front seven:

While the above group is extremely young, the Browns have nothing in the way of proven pass rushers. There may not be a more favorable team in the NFL for Wentz to start his career against.

The Browns have not had a winning record since 2007. Here are their records in each season since then:

As you can see, the Browns have lost double-digit games in seven of the last eight seasons. They'll probably lose at least 10 again in 2016. However, despite all their flaws, the Browns are a bit of a wildcard, in that they have a new head coach in Hue Jackson paired with a mobile quarterback in RG3, which can pose challenges to teams trying to game plan for the unknown the first week of the season.

The Eagles do not have the same advantage with Pederson, as opposing defensive coordinators will know to prepare for Andy Reid's offense.