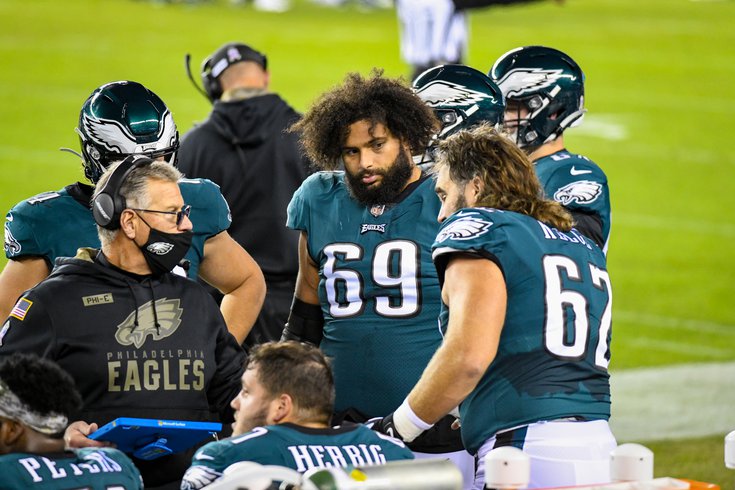 Matt Pryor on the sidelines during the Philadelphia Eagles game against the Dallas Cowboys at Lincoln Financial Field in Philadelphia on November 1, 2020.

Back in Week 8, the Philadelphia Eagles pretty easily handled the Ben DiNucci-led Dallas Cowboys, mainly on the strength of the defense. This time around, they'll face an Andy Dalton-led version that has won two straight games, and has been putting points on the board.

1) The Eagles rushing offense vs. the Cowboys run defense

The Cowboys' run defense has been absolutely horrendous in 2020. A game-by-game look:

In Jalen Hurts' two starts this season, the Eagles have rushed for 363 yards, or 181.5 per game. Hurts' and Miles Sanders' numbers in those games:

With Hurts almost certainly locked in as the starter the rest of the season, that's the Eagles' new identity on offense is (or at least it should be), and it matches up well against the Cowboys' defense.

In the Week 8 Eagles-Cowboys matchup, the Eagles were able to run the ball effectively, even without Miles Sanders, who was out with a knee injury. Boston Scott carried 15 times for 70 yards (4.7 YPC), and Corey Clement carried 5 times for 24 yards (4.8 YPC). The Eagles should be able to do damage on the ground, as long as Doug Pederson makes it a priority.

2) Cowboys DE DeMarcus Lawrence vs. Eagles RT Matt Pryor (or whoever else is in at RT)

After landing a $21 million per year contract during the 2019 offseason, Lawrence has been a disappointment, as he has since had just 10.5 sacks in 30 games. Still, he's the Cowboys' best pass rusher, and he leads the team in all the pertinent pass rushing categories:

Lawrence will mostly be going up against Matt Pryor, who had a rough outing against the Cardinals Week 15. For example:

To be determined if Pryor will start again at RT, or if the Eagles try out someone else, like Brett Toth. Whoever it is, that's a matchup the Cowboys have to like.

The Cowboys' season wasn't just wrecked by Dak Prescott's injury. It was also affected by the losses of RT La'el Collins, who hasn't played at all, and LT Tyron Smith, who has missed all but two games.

As a group, Brandon Graham, Derek Barnett, Josh Sweat, and Vinny Curry have 21.5 sacks and 5 forced fumbles this season. They must feast™ on Sunday against what is on paper an overmatched pair of tackles.

(Update: Sweat has a wrist injury and won't play on Sunday.)

4) The Eagles' banged-up secondary vs. the Cowboys' receivers

With Darius Slay, Avonte Maddox, and Rodney McLeod out last Sunday, the Eagles defensive backfield had the following snap counts:

Jacquet was responsible for a pair of forced fumbles, and Epps had an INT, but this group also gave up more than 400 passing yards. They'll have another really tough assignment this Sunday, as the Cowboys' receiving corps — led by Amari Cooper, Michael Gallup, and CeeDee Lamb — is the strength of their team.

In Week 8, Cooper had 1 catch for 5 yards on 5 targets with Slay trailing him once again, though it should be noted once again that the Cowboys' quarterback was Ben DiNucci. Slay should be back this week, but we'll see. Even if Slay is a go and he'll trailing Cooper, the other receivers will have favorable matchups.

We've been saying all season long that Zeke Elliott is clearly in decline already, and that his backup, Tony Pollard, is better. In Week 15, Elliott was scratched with a calf injury. Normally, that would be big news, but is was mostly met with shrugs when it was announced on prior to their game on Sunday.

As the lead back against the Niners, Pollard ran 12 times for 69 yards (5.8 YPC) and 2 TDs. He also chipped in 6 receptions for 63 yards. Watch this run that sealed the game.

Pollard is more elusive than Elliott, and more of a threat as a receiver.