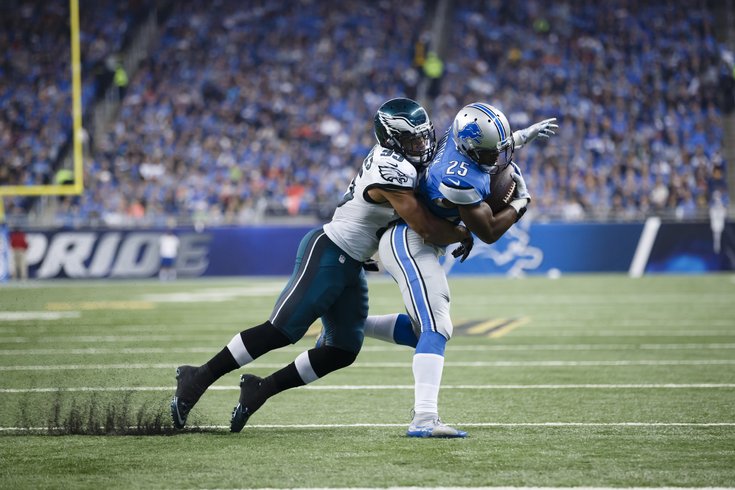 You only have to go back about 10 and a half months to find the last time the Philadelphia Eagles visited Detroit. In case you've scrubbed that Thanksgiving Day massacre from your memory, the Birds were routed, 45-14, by the Lions.

Prior to that, the Eagles hadn't lost in the Motor City since 1977, back when Ford was still pumping out Pintos. And before that? Try 1945, just three months after the U.S. bombed Japan and effectively ended WWII for good. In the 70 years since, the Eagles are 15-7-2 overall against the Lions and 6-2-2 in Detroit.

Compared to last year, however, this is a totally different Eagles team. New coach, new quarterback, new defense. If you're expecting the outcome to be anything like it was on Thanksgiving, you might want to think again.

Here's a look at how our staff sees Sunday's game playing out.

For the fourth consecutive game, as we noted in our five matchups to watch, with Lions stud pass rusher Ziggy Ansah likely out, the Eagles will face an opposing defense with a starting front seven that lacks consistent, experienced pass rushers. In their first three games against the Browns, Bears, and Steelers, the Eagles' offensive line has given rookie quarterback Carson Wentz plenty of time to throw, and Wentz has made opposing secondaries pay the price. That should be the case once again this Sunday in Detroit.

On the other side of the ball, the Lions should find it difficult to run the ball against the Eagles' defense (or against any other defense, for that matter). Starting running back Ameer Abdullah is on IR, backup Dwayne Washington missed practice this week with an ankle injury, and Theo Riddick, while a good receiver out of the backfield, has just a 2.98 yards per carry average over his career. Meanwhile, the Eagles are third in the NFL is rush defense, allowing just over 70 rushing yards per game.

Those are two lopsided advantages in favor of the Eagles. This matchup may have the feel of a "trap game," but the Lions are banged up and lacking quality depth. The Eagles continue their hot streak, 30-17.

For a long time now, the Eagles have been tremendous after the bye week.

Under Andy Reid, they started 13-0 before a loss to Atlanta as Hurricane Sandy crashed into the East Coast in Reid’s final season. Chip Kelly was 2-1 during his time here, as well. So… no pressure, Doug Pederson.

I picked against the Eagles the last two weeks and got burned. No mas. The Eagles are the more rested team, the healthier team, and the flat-out better team. You might believe this has all the makings of the classic “trap game,” but I think that the Jim Schwartz homecoming is a successful one.

Zach Ertz catches a touchdown pass in his return to action, while the Birds defense gets after Matthew Stafford early and often, only to give up a late touchdown drive to the king of garbage time that makes the game seem closer than it really was.

I keep thinking that this Eagles team is going to come crashing down to earth in spectacular fashion -- not because I'm rooting for that to happen, but rather because this all seems just too good to be true. It's not just that the Eagles are 3-0. It's not just that they demolished a Steelers team that has looked like a serious Super Bowl contender in each of their other three games. It's not just that their rookie quarterback has been outplaying not just his peers, but seasoned veterans as well. It's also their NFL-leading defense, one that has yet to allow a passing touchdown, and their better-than-expected offensive line. The list goes on and on.

Had this game come immediately following the Steelers win -- and with a bye week in between -- I could see this being a trap game for the Birds, with their first divisional matchup against Washington on the horizon. But I just don't see that happening this week.

The Lions, as you might expect, is dangerous once again despite being held to just 263 total yards and 14 points against the Bears last week, but their defense has forced just one turnover through four games and surrendered over 400 yards to a Brian Hoyer-led offense.

Look for Jim Schwartz's defense to take advantage of the Lions' struggles on the ground since losing starting RB Ameer Abdullah to injury and force Detroit into a lot of third and long situations, allowing them to get after Matthew Stafford and force some turnovers.

The one negative for the Eagles defense? It's going to allow its first passing touchdown of the season on Sunday -- I'm predicting a catch and run by Theo Riddick. But they'll make up for it by scoring a defensive touchdown en route to a blowout win in Detroit.