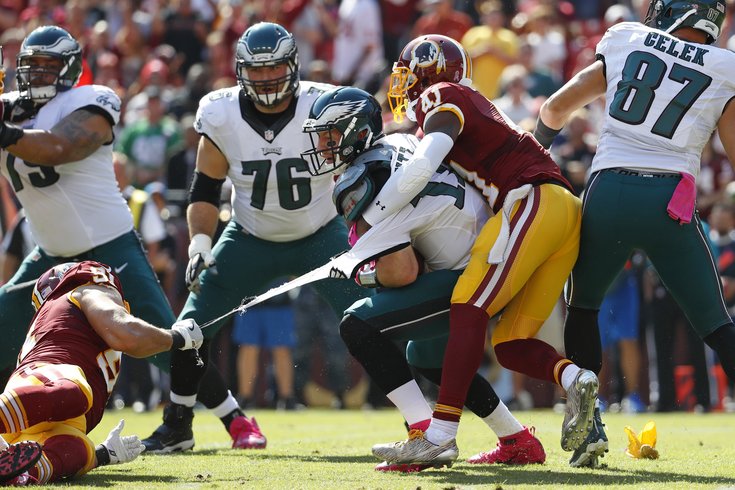 Philadelphia Eagles quarterback Carson Wentz was sacked a season-high five times when he faced the Washington Redskins back in Week 6.

When the Eagles host Washington on Sunday, Carson Wentz will be facing a defense that he's already seen for the first time in his young career. Whether or not that proves to be a good thing – don't forget, the Redskins have also seen him before – remains to be seen, but the good news for the rookie quarterback is that this time around, the game is in his building, where the Eagles are 4-1 on the season.

There's also not much room for Wentz to do anything but improve on his first outing against Washington. In the 27-20 loss back in Week 6, he was sacked a season-high five times in team's first game without starting right tackle Lane Johnson. Wentz also completed just 11 of his 22 passes – both season lows, as was his 50 percent completion rate – for 179 yards, no touchdowns and no interceptions.

The only reason the Eagles were actually in the game was the play of their special teams and defense in the first half. Wendall Smallwood (kick) and Malcolm Jenkins (interception) both had return touchdowns in the second quarter to rally the Birds' from an early 14-0 hole. Sure, it was a seven-point loss, but the game was never really that close.

Washington more than doubled the Eagles' yards gained, 493-239. In fact, the Redskins' rushing yards (230) alone nearly surpassed the Birds' entire offensive output, not to mention the fact that they averaged nearly seven yards per carry (6.97). The Eagles were also penalized 13 times in the game for 114 yards.

It was ugly. And given how their season has gone in the nearly two months since, there's not much reason to believe things are going to be better the second time around.

Here's how the two teams match up on paper, plus how we see things playing out on Sunday as the Eagles again try to pick up their first division win of the season.

The Redskins own the Eagles, and they need this game badly to stay in the wild-card hunt.

The Eagles have been dominated by the Racial Slurs recently, with Washington taking the last four games in the series. That run includes a 27-20 win in Landover earlier this year that wasn’t actually that close:

There is the temptation to pick the Eagles this week, only because a loss would screw over Washington more than help Philly. And really, isn’t that NFC East football in a nutshell?

But I can’t in good conscience pick a team that has looked so terrible on both sides of the football in recent weeks. I don’t think Kirk Cousins has the type of monster day we have seen of late from him (“Pay that man his money,” every Eagles, Giants, and Cowboys fan says), but he’ll find enough time against a Birds pass rush that has been a major disappointment as the season has rolled along.

Washington’s run defense is ranked 30th in the league, per DVOA. Can the Birds get the ground game going and stick to it this week?

Remember last season, after three straight losses capped off by a 45-14 Thanksgiving Day blowout in Detroit, when the Eagles looked completely lost and it felt like they may never win another game again? Remember what happened the following week -- they went into Foxboro and stunned Tom Brady and the Patriots? Remember how they followed that with a win over the LeSean McCoy and the Bills?

Remember how fun that was? 'Member?

Good. Now enjoy that memory one last time before it gets wiped, because that's not what will happen on Sunday.

It's hard to see the Eagles, who are all but out of playoff contention, completely turning things around against a division opponent who is still very much in the hunt for a wild card spot. I see that upset coming next week in Baltimore, a game sandwiched between two very important road games for the Ravens (at NE, vs. PHI, at PIT).

While it would be nice for Wentz to pick up his first win against an NFC East team, that may have to wait until Week 16 or 17. Washington has owned the Eagles lately, and the Birds' recent play on both sides of the ball doesn't offer much hope that Doug Pederson's team will turn it around this week.