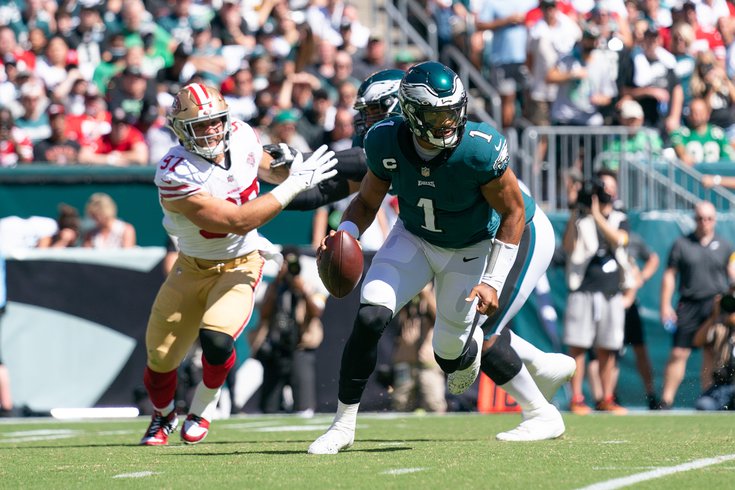 Jalen Hurts and the Philadelphia Eagles will face the San Francisco 49ers in the NFC Championship Game.

The Philadelphia Eagles will face the San Francisco 49ers in the NFC Championship Game, which will be played at Lincoln Financial Field next Sunday at 3:00 p.m.

The 49ers had an interesting season. Their Week 1 starting quarterback was Trey Lance, a dual threat who the Niners traded a bounty of picks for in the 2021 NFL Draft. Lance suffered a season-ending ankle injury Week 2 against the Seahawks, and Jimmy Garoppolo, a player the Niners were open to trading, took over.

They started out with a 3-4 record, but eventually got hot and haven't lost since. They are currently riding a 12-game winning streak, the longest in the NFL. Five games into that streak, Garoppolo suffered a broken foot and the Niners were forced to turn to their No. 3 quarterback, rookie Brock Purdy, who was the 262nd and final pick of the 2022 NFL Draft. Purdy guided the Niners to a 5-0 record to close the regular season, and as noted above, two playoff wins.

In addition to homefield advantage, the Eagles will have the small benefit of one extra day of rest, since they played their divisional round matchup on Saturday night. The opening line, depending on where you look, is Eagles -1.5 or Eagles -2.