One gigantic dinosaur comes to life in virtual reality at Drexel

Grad student's master's thesis: Put in motion of the largest animals to ever roam the earth 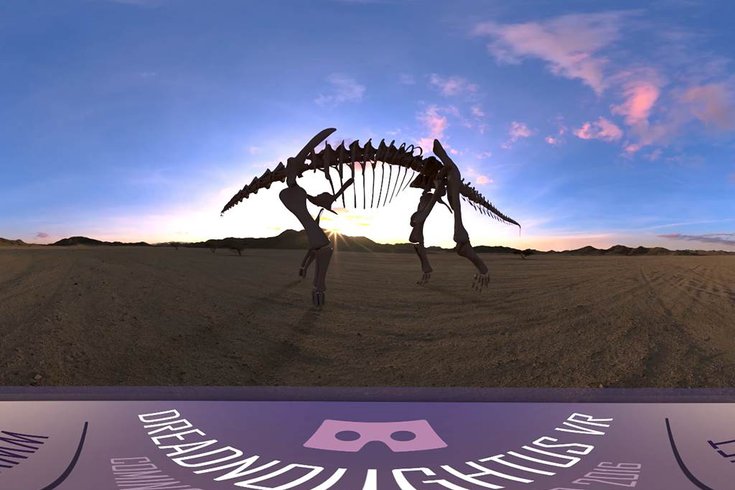 Drexel University Westphal College graduate student Valentina Feldman is rendering an animation of Dreadnoughtus schrani in an immersive 3D video format as part of her thesis project — an educational virtual reality experience featuring Dr. Ken Lacovara, the paleontologist who discovered Dreadnoughtus, the heaviest land animal to ever roam the earth.

Imagine being whisked away from Dinosaur Hall at Philadelphia's Academy of Natural Sciences to the middle of the barren Patagonian Desert in southern Argentina, where an enormous long-necked, long-tailed dinosaur is assembled piece-by-piece before your eyes.

The immense beast lumbers around you in a circle, first as a collection of bare bones that form its skeleton and then followed by layers of muscle and skin.

An interdisciplinary group of students at Drexel University is in the midst of creating such an immersive experience in the form of a six-minute virtual reality (VR) documentary that will be used as an educational tool.

The star of the show is Dreadnoughtus schrani, the supermassive dinosaur that was one of the largest animals to ever walk the Earth. It holds the title of heaviest land animal whose body mass can be accurately calculated, weighing more than a Boeing 737 aircraft and a Tyrannosaurus rex combined.

“Dreadnoughtus will be able to stand directly in front of you, and having that visual of a giant dinosaur gets kids really engaged in the science behind it.” – Valentina Feldman, a digital media grad student at Drexel and creator of the short film

The project emerges as part of a growing movement of using virtual reality tools for education in the classroom and beyond. Last year, Google announced that it would offer Cardboard VR headsets and its field-trip simulation software, Expeditions, to schools free-of-charge. The film, “Dreadnoughtus VR,” will be distributed through all common VR platforms including Google Cardboard, Oculus Rift, and HTC Vibe. In addition, the team plans to release it on YouTube 360, which allows users without a VR device to click and drag while watching.

The project still has some ways to go before the finished product is released publicly in July, but the team has released a 1-minute teaser trailer.

Starting with the reconstructed skeleton, Valentina Feldman added layers of muscle and tissue to digitally create an animated Dreadnoughtus schrani model. Feldman, a digital media graduate student at Drexel, is creating the short film as her master's thesis.

“The documentary was designed to be comfortable and accessible for a wide audience,” said Valentina Feldman, the digital media graduate student at Drexel who is creating the short film as her master's thesis. “Dreadnoughtus will be able to stand directly in front of you, and having that visual of a giant dinosaur gets kids really engaged in the science behind it.”

While the CGI reconstruction of Dreadnoughtus certainly has a striking look, Feldman and her colleagues took the project a step further by also focusing on scientific accuracy. The team read papers on dinosaur physiology and biomechanics, consulted multiple paleontologists, and reached out to digital animators from companies like DreamWorks. They had the benefit of working closely with Rowan University paleontologist Kenneth Lacovara, who discovered and unearthed Dreadnoughtus between 2005 and 2009 when he was still a professor at Drexel.

“We're lucky with Dreadnoughtus because the bones are beautifully preserved, and we have a significant number of them — for example, we have at least one of every limb bone. For these giant titanosaurs, that makes Dreadnoughtus the best-represented skeleton yet.” – Kristyn Voegele, Drexel paleontology doctoral student

Lacovara also features prominently as a virtual guide throughout the documentary, walking viewers through all the research that has been done so far on his prized finding. After initial excavation, the fossilized remains were brought to his lab in Philadelphia and digitally captured using a 3D laser scanner.

“The 3D laser scanning started as part of Dr. Lacovara's research, so we could have digital models of the bones before returning them to Argentina,” said Emma Fowler, a Drexel undergraduate majoring in Paleontology and Digital Reconstruction. “When we first started scanning and putting the model together in the computer, Dr. Lacovara and his colleagues were amazed to be able to see and rotate those bones around, because some of them weigh hundreds of pounds.”

To add muscles and tendons to the digital skeleton, Feldman and Fowler sought the expertise of Kristyn Voegele, a Drexel paleontology doctoral student studying the biomechanics of Dreadnoughtus. Voegele used her knowledge of dinosaur physiology and biology to fill in the knowledge gaps to help create both 3D-printed physical and digitally animated representations of how these behemoths might have moved.

For instance, a close examination of the remains of Dreadnoughtus reveals clues as to where and how soft tissue once adhered, in the form of muscle attachment scars.

“Since bone is living tissue, a ligament or muscle that attaches to bone creates stress at that location,” said Voegele. “The bone actually changes its shape to combat that stress, which leaves a textured area on the bone that we can identify.”

For missing bones or those without muscle attachment scars, she used an inference method called extant phylogenetic bracketing. Paleontologists commonly use this method to make educated guesses about an extinct organism by looking at its closest living relatives for possible anatomic hints. In the case of Dreadnoughtus, these relatives include alligators, crocodiles and birds.

“We're lucky with Dreadnoughtus because the bones are beautifully preserved, and we have a significant number of them — for example, we have at least one of every limb bone,” Voegele said. “For these giant titanosaurs, that makes Dreadnoughtus the best-represented skeleton yet.”

After adding the muscle and skin layers to create a full 3D reconstruction, the team used a special program to simulate muscle movement and voilà — the fully accurate, virtual Dreadnoughtus took its first booming step.

Of course, the making of “Dreadnoughtus VR” requires much more than just an digitally animated dinosaur. The video interview of Lacovara in the Academy of Natural Sciences's Dinosaur Hall required a complex camera rig to shoot 360 degree video in 4K. While the cost of such a rig ordinarily costs as much as $60,000, Feldman and her adviser invented their own specifically for this project at a fraction of the price, about $8,000.

Next month, Feldman will screen the short film for an audience as part of her thesis defense, entitled “Immersive Paleoart: Reconstructing Dreadnoughtus schrani and Remediating the Science Documentary for Cinematic Virtual Reality.” As part of the Dreadnoughtus exhibit at the Academy of Natural Sciences, she hopes that the project helps push VR further as an educational tool that can transport viewers to another world while still teaching them something fascinating about science.

“In one scene, you see a balance scale where on one end you have Dreadnoughtus and on the other end is an airplane,” said Feldman. “In this segment, you can really see how huge this animal was by having a 737 airplane in front of you — and Dreadnoughtus is still tipping the scale.”