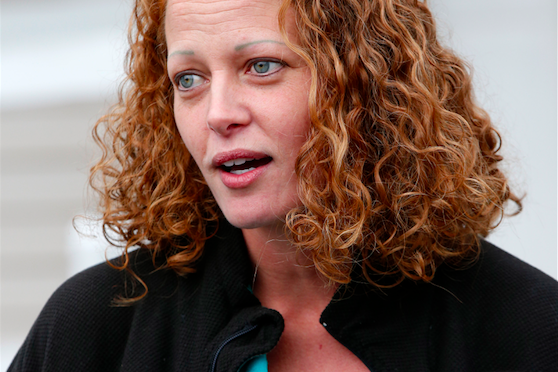 Nurse Kaci Hickox speaks to reporters outside her home, Friday, Oct. 31, 2014, in Fort Kent, Maine. A Maine judge gave Hickox the OK to go wherever she pleases, handing state officials a defeat Friday in their bid to restrict her movements as a precaution against Ebola.

The nurse who sparred with New Jersey Governor Chris Christie last year over her confinement at Newark Liberty International Airport will file a federal civil rights lawsuit against his administration, her lawyers announced Thursday.

Kaci Hickcox, 34, garnered national attention in 2014 after returning home from an assignment as a volunteer health worker in Sierra Leone amid the nation's Ebola outbreak. When she underwent a forehead-scan thermometer screening at the Newark airport, a mild fever reading led officials to detain her for several hours before transporting her to Newark's University Hospital, according to NJ.com.

Despite showing no fever at the hospital and testing negative for Ebola, Hickox was held in an isolation tent against her will for an additional two days until her lawyers intervened.

At the time of the incident in October 2014, Governor Christie and New York Governor Andrew Cuomo had both announced stricter regulations for returning workers than the federal standards.

Christie brushed off Hickox' complaint at the time, inviting a lawsuit and stating he would be happy to take it on. He said the American public viewed the quarantine as "common sense" and he did not intend to budge on it.

After Hickox was released, she was driven by three medical workers to her home in Maine, where the state attempted to impose home confinement on her. She was able to defeat the quarantine in a high-profile case that weighed personal freedom against the fear of spreading disease.

The suit contends that the Christie administration violated Hickox' civil rights and is backed by the New Jersey chapter of the American Civil Liberties Union.