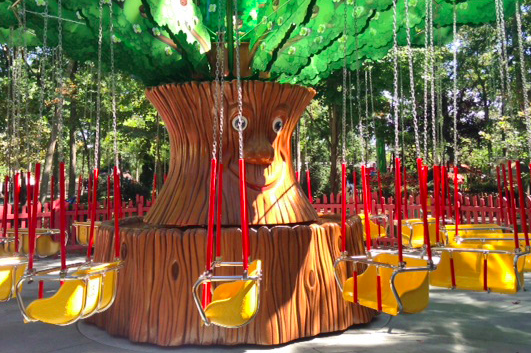 Officials at Storybook Land in Egg Harbor Township shut down the "Out on a Limb" ride after a girl was injured in a fall on Oct. 18, 2019.

A girl was injured Friday when she fell off of a ride at Storybook Land in Egg Harbor Township, the amusement park said.

In a statement of Facebook, the park said the victim was injured on the "Out on a Limb" swing ride. She required medical attention and the ride was closed pending the outcome of an investigation.

Park general manager JJ Fricano told NBC10 the girl slipped out of her seat around noon on Friday and fell onto a concrete surface. Her age was not released. The injuries were described as "mild to moderate."

The spinning, elevated swing ride requires riders to be at least 36" tall with a responsible co-rider and 42" tall to ride alone, the park's website says.

Friday's incident comes after a 10-year-old girl died last weekend from injuries suffered at the Deerfield Township Harvest Festival in Cumberland County. The victim, identified as Hailey McMullen, was ejected from the Super Sizzler ride manufactured by Wisdom Rides.

Officials later shut down that ride and similar rides until an investigation has been completed.