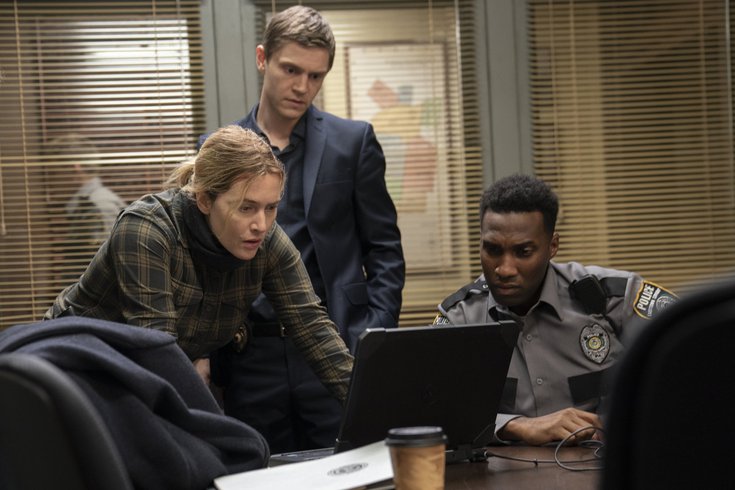 HBO's 'Mare of Easttown,' received 16 Emmy Awards nominations, including outstanding limited or anthology series. Kate Winslet is also up for outstanding lead actress in a limited series for her work as Mare Sheehan.

Hold on to your Wawa hoagies! "Mare of Easttown" could be in for a big night at the 73rd Emmy Awards.

The HBO whodunit that is chock-full of Delaware County and Chester County references, starring Kate Winslet as aggressively vaping detective Mare Sheehan nabbed 16 Emmy nominations Tuesday, including outstanding limited or anthology series. Challenging the show for that award are "The Queen’s Gambit" (Netflix), "The Underground Railroad" (Amazon Prime), "WandaVision" (Disney Plus) and "I May Destroy You" (HBO).

Winslet, who wanted to "throw things" while mastering the Delco accent for the show's lead role, is up for outstanding lead actress in a limited series or movie. The British actress last won an Emmy in 2011 for her work on HBO's "Mildred Pierce."

Evan Peters earned a nomination for outstanding supporting actor in a limited series for his portrayal of Colin Zabel, a county detective who is called in to help Mare solve a murder case that rocks the Easttown community. Jean Smart and Julianne Nicholson received nominations in the outstanding supporting actress category for their roles as Mare's mother, Helen Fahey, and best friend, Lori Ross, respectively.

Show creator Brad Ingelsby, a Chester County native, was nominated for outstanding writing for a limited or anthology series or movie. In May, Ingelsby told PhillyVoice that the show was inspired by his desire to write about growing up in Berwyn.

"I really wanted to tell a story about home," he said, "and I wanted to share with an audience the rhythms of life in a very specific part of this country."

"Mare of Easttown" debuted in mid-April, but parts of the show were filmed in 2019 before the COVID-19 pandemic. The cast and crew completed production in 2020 under the constraints of Pennsylvania's health and safety protocols, shooting at locations in Coatesville, Chadds Ford, Phoenixville, Wallingford, Springfield and several Philadelphia neighborhoods.

To capture the essence of Delaware County in the character's clothing, Ingelsby and director Craig Zobel suggested costume designer Meghan Kasperlik spend time people-watching at Wawa check-out lines. That move, it appears, paid off in the form of a nomination for outstanding contemporary costumes.

"The fact that we're showing a real community having real hardship, and that it came out during this post-pandemic period, it just shows the audience real people," Kasperlik told PhillyVoice in May. "Unlike other shows that are all about the fashion or location, I think everyone is relating to people wearing their sweatpants out of the house. The aesthetic of what the houses look like in the show and what the people look like – it's pretty real. That's resonating. Who knew that the pandemic style would be Easttown?"

Below is the list of all of the awards the show was nominated for below:

The 73rd Emmy Awards will be held Sept. 19 and will be broadcast on CBS. "The Crown" (Netflix) tied with "The Mandalorian" (Disney Plus) for the most nominations with 24 apiece, the Associated Press reported.

Below is list of some of the most popular categories at the Emmy Awards along with the show's nominated. A complete list can be found here.

Outstanding Lead Actor in a Limited Series or Movie

Outstanding Lead Actress in a Limited Series or Movie

Outstanding Supporting Actor in a Limited Series or Movie

Outstanding Supporting Actress in a Limited Series or Movie