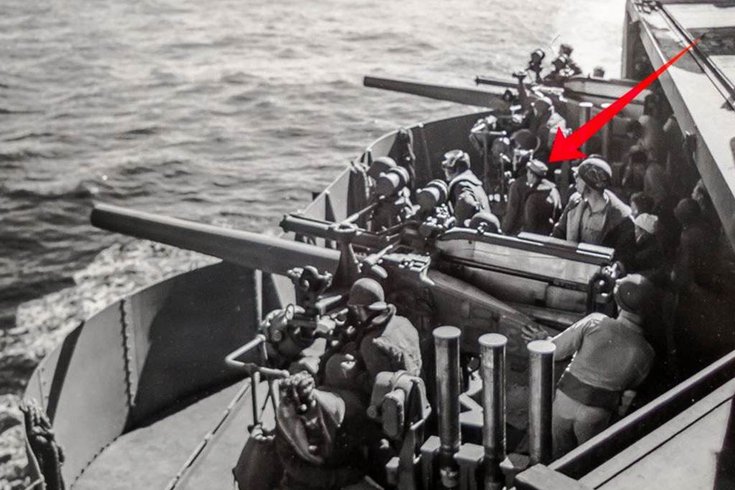 The original caption on this official U.S. Navy photo reads: 'Gun crews of a U.S. Aircraft Carrier get ready for trouble after an 'alert' is sounded on the way to North Africa, Dec., 21, 1942'. The red arrow indicates the location of gunner's mate Raymond L. Shelly.

For the most part, I don’t react emotionally when I hear a politician say anything: brilliant, stupid or even in-between.

But then along comes Donald J.Trump’s insight on PTSD and my professional armor is pierced.

When you talk about the mental health problems, when people come back from war and combat and they see things that maybe a lot of the folks in this room have seen many times over and you’re strong and you can handle it. But a lot of people can’t handle it.

So the essence of the Trump message was: If you’re strong you can handle it. But a lot of other people – my father included – can’t.

That’s the popular takeaway from Trump, who sat out Vietnam with a succession of education draft deferments, followed by a disqualifying diagnosis: the horror of debilitating bone spurs.

Studies show 38 percent of all people have bone spurs; just 5 percent suffer any pain. What are the odds that the horror of debilitating bone spurs would keep Trump out of the rice paddies? But I digress.

The meta lesson – to insulate myself from politicians – comes from covering politics off and on for more than three decades.

I’ve learned there is no end to the disappointment politicians – anxious to get elected and next to curry the necessary favor to get re-elected – are capable of delivering.

Whenever I feel myself feeling slightly empathetic to a politician while practicing journalism, I hear this quote in my head from “All the King’s Men,” a classic American novel about the confluence of politics and journalism:

Just tell 'em you're gonna soak the fat boys and forget the rest of the tax stuff... Make 'em cry, make 'em laugh, make 'em mad, even mad at you. Stir them up and they'll love it and come back for more, but, for heaven's sakes, don't try to improve their minds.

The words, by writer Robert Penn Warren, are spoken by a character, Jack Burden, a former journalist turned political shill for a populist politician.

The passage makes me cringe.

My disdain is borne of experience, having been misled or lied to by elected officials from school board members, local councilmembers, many mayors, several state senators, members of Congress, governors and their various minions.

While not having closely covered presidential races, I’ve voted for more than one president who were – and are – disappointments.

For a journalist, falling for a politician and his or her posturing and rhetoric is about the same as devoted married evangelist preaching transformation to a hustling hooker: Not destined to end satisfactorily for either party.

No, better to remain detached and wary, the sweet spot for a journalist, well at least before the advent of Fox News and MSNBC.

But then came the Trump PTSD soundbite. Wham. There went my personal detachment.

I don’t have PTSD, though some of the crap I have covered wakes me up. But my dad had PTSD for 64 years, from the time he was 18 until the day he died at the age of 82.

“Being labeled as ‘weak-minded’ is precisely why so many people don’t seek treatment for their symptoms. It’s a tragedy. People with PTSD often wonder ‘Why can’t I just shake this off and move on?’ – Angela Cantwell, clinical director of nursing for behavioral health, Einstein Healthcare Network and PTSD patient

And the first time anyone called my father’s condition PTSD was 62 years after the event which caused it.

Raymond L. Shelly joined the U.S. Navy at just 17 in 1942. Still a boy, he served as a gunner’s mate, the sailor who ran the operations of the gun emplacement aboard the U.S.S Ranger, an aircraft carrier.

Long before D-Day, his carrier launched an air battle on Morocco. They were greeted by shooting from the puppet Vichy French forces – not the Nazis – during a three-day battle.

When it was over, his carrier group landed Gen. George Patton’s army in North Africa.

Next the Ranger raided Nazi-held ports in occupied Norway.

Then it happened: an aircraft attack left my dad’s entire gun crew dead, “a bloody mess,” as one of his shipmates has recalled.

Dad was the lone survivor. As the gunner’s mate, he stood behind and to the left of the gun – a few feet that meant he lived, his crew died.

Depressed, withdrawn, his sleep filled with night terrors, he was hospitalized for a short time in the Navy Hospital in San Diego, listed as having “battle fatigue.” There was no meaningful treatment.

Fatigue meant PTSD, a Veterans Affairs hospital counselor told my dad, my sister, my mom and me in 2005.

The belated diagnosis, of course, made sense given his recurrent nightmares, crazy startle reflexes and frequent moroseness.

As his dementia took deeper hold during his last few years, the nightmares became more frequent, shouting out the names of the dead crewmen at night. By then, the dementia meant there was no treating the PTSD.

Quite simply, Trump’s thoughtless words pissed me off. My sister, too, perhaps more angrily.

To be fair, I went back and listened to the entirety of Trump’s remarks.

They were made in response to a Marine sergeant who’d been treated for PTSD and depression following eight combat deployments. And Trump answered that he supported more mental health treatment for veterans.

But the self-inflicted wound created by his words were already out of the box and into my thoughts:

If you’re strong, you can handle dealing with the horror of war. If you are weak, you can’t handle it.

I’m not the only one who heard and reacted to Trump’s initial message just that way: It’s kicked off a buzz.

When I talked to her on Tuesday, Cantwell was anxious to discuss PTSD – which she has herself, the result of 17 years of running a child response center at Einstein.

But there is more: Both of Cantwell's grandfathers had PTSD. Her neighbor has PTSD, and runs into the street screaming, hearing imaginary bombs exploding.

She quoted some stats to PhillyVoice:

• About 20 percent of all service members have PTSD. But anyone with trauma can end up with PTSD

• Anyone can experience PTSD, it has nothing to do with having a “strong mind” or not

• PTSD is a normal human response to uncommon experiences

Risk factors cited by Cantwell include:

• Exposure to intense or pervasive trauma

• A diagnosis with another mental health issue

Cantwell said while the precise intention of Trump’s words may not be clear, many Einstein patients were offended by his words.

She added that as a result some patients were feeling “marginalized and labeled. They don’t want to be labeled.”

Cantwell said citing “strength of mind” indicates a lack of insight or experience on Trump’s part.

“Being labeled as ‘weak-minded’ is precisely why so many people don’t seek treatment for their symptoms,” she said. “It’s a tragedy. People with PTSD often wonder ‘Why can’t I just shake this off and move on?’

“They can be frustrated, confused, afraid and isolated," said Cantwell, who has been treated for her own PTSD for three years.

I'm pretty sure Ray Shelly might understand, even if Trump doesn't.