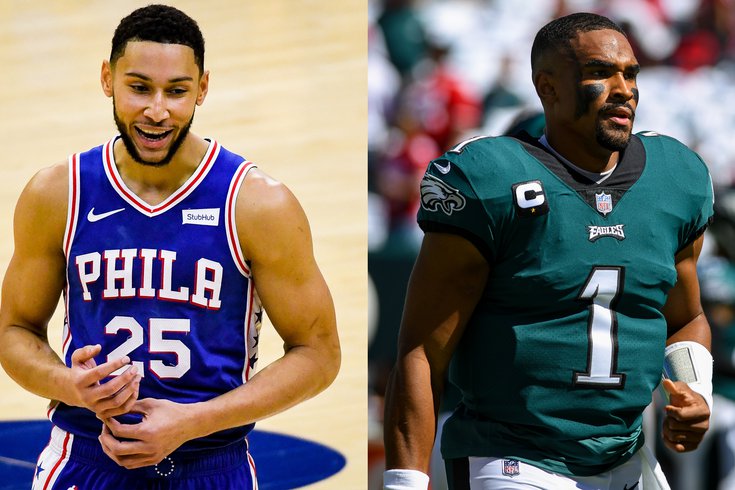 Ben Simmons and Jalen Hurts are each unique challenges for Philly's respective GMs.

Commit to the kid.

Wednesday should have provided more answers on when both above statements will come true – if ever – but we are still stuck in sports purgatory. We got another master class in non-committal committal talk from Howie Roseman, and another reminder that Joel Embiid – desperately – needs help. We didn’t’ get what we want. We didn’t even get what we need.

Roseman and the Eagles are in a difficult spot – one they are responsible for in the first place. They can’t make a long-term commitment to Jalen Hurts because they simply don’t know if he’s a franchise quarterback. That’s what you will be told via reports and leaks, but the reality is it takes a completely different type of team build to create structure around Hurts. It’s not like switching from a 3-4 to a 4-3, rather nuking a pass-first/heavy approach for one that uses the pass as a necessity.

Daryl Morey is also in a difficult spot. Ben Simmons is a moron, the people advising him are ignorant of basic league policies, and Embiid is putting together a true MVP season. We just saw the Phillies waste an MVP season for Bryce Harper, so yes, it’s a major concern for me with the Sixers. Morey insists he wants an All-Star in return, but how many more regular season games do we need to see dominated by Embiid before it’s too late? They either don’t make a trade or simply make it too late in the season.

The Eagles were able to put together one heck of a run against non-playoff teams. They ended the regular season on a strong note – not counting the Cowboys game because the Eagles certainly didn’t either. It should be enough to convince the Eagles to commit to Hurts for the long-term. But the team knows it has a grace period of one year where it can keep Hurts, then trade a favorable team-contract. So, yes, the team technically said Hurts will “continue” to be the starter, but we know it’s another prove it year.

I honestly don’t think people appreciate how hard it is to just land a player in the middle of a season and expect them to gel by the playoffs. Morey may be right in his moral stance against idiocy in whatever Simmons is doing, but at some point, he owes it to Embiid to just make the damn trade. Ideally this team would need another All-Star, but if that’s unattainable then they must put Tobias Harris in the deal. Maximize the return, but even more of a reason why this team needs to make the trade now. Like, today.

Who is to say the Eagles won’t aggressively go after another QB? Russell Wilson wants out of Seattle. Aaron Rodgers may walk after winning the Super Bowl. Maybe the Eagles are enamored with Derek Carr and all of those passing yards. The Birds have currency and it’s no good just stashing it under Jeff Lurie’s luxury mattress. Have you ever just sat on a couple of 20’s in your pocket? Cash that you can use but haven’t used quite yet is dangerous. Burns a hole right through that designer suit pocket.

The irony in all of this might simply be as much as we continue to push the Sixers to make a trade, it’s the Eagles who ultimately do the deal. We already know the Birds would need a miracle to build fast around any new QB, especially an older player like Wilson or Rodgers. There’s no anchor on the Eagles like Embiid is on the Sixers.

To put it blunt – the Eagles aren’t good enough to trade for any veteran QB, not with this defense and coaching staff around it. All things are never equal in a trade and giving up current and future stock is always the way these deals go down. We also can’t just expect any player to just walk in a new environment and be the same as he was on another team. It takes time and the right people and coaches around that player. But most importantly – it takes time.

Which is exactly why this thing needs to go down with the Sixers. Watching Embiid torch a trash Magic team for 50 is just another sobering reminder that the Sixers are currently playing to make the playoffs. We need another body here to prove this team is serious about making a run in the playoffs.

The goal for the Eagles is to make the playoffs but they aren’t sure if that’s possible again. They looked at the entire season and boiled it down to how well they played against better teams. Watching Roseman and Nick Sirianni just proved this team is not content with how things ended this year — something we’ve seen cause massive changes within an organization. This concerns me as a fan and supporter of Hurts.

I’m also not asking for massive changes in the Sixers organization – just a simple trade to help out this year’s MVP. I can’t deal with another wasted year of failed post-season expectations as the NBA (finally) recognizes Embiid at the top.

This line is off because the Bills beat up the Patriots. Buffalo is a rich man’s version of the Eagles. They just beat a couple of playoff-bound teams. The Chiefs struggled to cover numbers at home, but those were larger numbers earlier in the season. There’s also the first time these two teams played, that ended poorly for KC. It’s clear this Chiefs team is not the same as they once were, and their defense is up for the challenge in stopping the Bills offense. Josh Allen and Buffalo will be playing from behind, as the Chiefs open leads at home. Andy Reid and Patrick Mahomes won’t even break a sweat. This line is off and I’m pounding the Chiefs.