Eytan Shander: The better the Sixers play, the more nonsense fans will hear 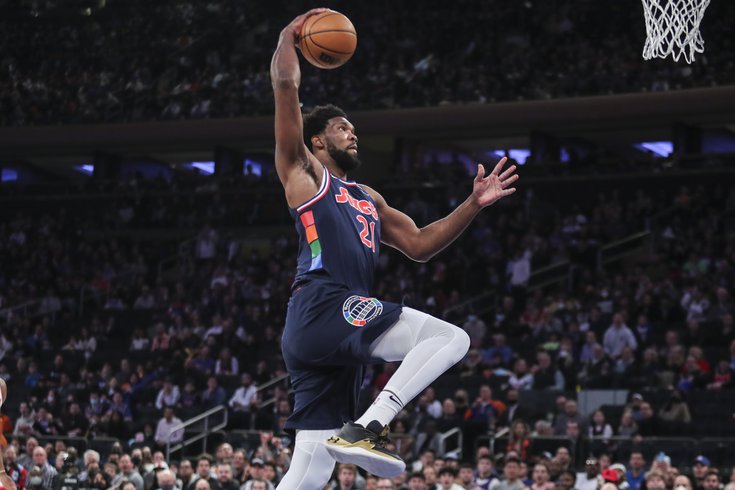 You have a target on your back.

People who work in sports media on much larger scales than just Philadelphia are aware of it. They produce daily shows with us – and a few other hot spots – totally in mind.

“You know… If you say the most absurd thing about Philadelphia, they will erupt, share this clip, and spend a week talking about you.”

I’ve heard that conversation in my past. Admittedly, I’ve made that point in my past both on a national show and during my time at 97.5 The Fanatic. We are so damn passionate that we care about everything said – the more outlandish, the more we seek to rebut it.

Guys like Colin Cowherd and Cowherd clones know this about us and prey on it. It used to be a fan doing something horrific or laughing at one of our teams losing – sometimes on purpose. But now this nonsense spilled over on the good things happening in our city, and that’s not worth a second of your time.

James Harden and Joel Embiid have been discussed individually as two of the best players the NBA has ever seen. I’m not putting some arbitrary ranking to it, top 10, 15, etc. They are both doing things that we rarely see from players at their respective positions.

It’s impossible to praise Joel Embiid for doing things the NBA hasn’t seen since Wilt Chamberlain – a guy who most of the fanbase hasn’t ever seen play for themselves – and ignore his fit with Harden. It’s not possible to look at Harden as one of the best scorers ever and conveniently look away at his fit with Embiid.

Any idiot with a platform saying otherwise is ignorant of the game or using us to boost their ratings. I don’t care if it’s someone at ESPN or Barstool. It’s a numbers game. Now that we have something to defend, to stand up and cheer for, they are going to ramp it up and continue to try and tear down this team.

This isn’t a typical “ignore what’s already been said” column, rather a prepare yourself for what’s coming.

We should all be a little more like Joel Embiid. A little more like Tobias Harris. We should look to James Harden and even Jalen Hurts. They have blocked out all the noise – even if it was coming from us. We need to take a page out of Embiid’s book, a chapter from Harden’s tales and ignore the conversations happening by “smarter” people only because they happen to be on TV.

Mainly because this isn’t going away.

That idiot from FOX was just the first to fire off, but he’s a pawn, a random piece of the infantry. Once the Sixers show the outside world how legit championship aspirations are justified, all hell will break loose. You won’t have to Google the talking heads who will be firing away, that I’m certain.

This is an amazing time in Philadelphia sports history and there is so much to back it up, between data and conversation. Harden already has his on-floor resume here and picked up without a hitch. Embiid has already been discussed as one of the all-time dominating big men, especially in a weird era for bigs. Most of the outside criticism doesn’t even make sense beyond trying to pin Harden as an escape artist – gone at the end of this or next year.

What else can they say? They don’t fit together? Don’t do other people’s homework for them and bail out their ignorance. If people don’t watch the games, then chalk it up to just that.

What other area in your life do you give so much attention to people who are either willingly ignorant or willingly trolling you?

We don’t hire professionals with zero work experience. We don’t listen to lawyers or doctors without degrees. We certainly don’t heed parenting advice from the childless. The only place where you validate people with zero credibility is social media.

We’ve turned into Twitter. People can ignite a conversation by simply belching out the oldest stereotype or trying to ruin a parade.

Nobody is going to do that to me, not with this team in this year’s NBA. The Sixers are as legit a contender to represent the East as any other team in the conference. They should be treated with that level of respect at the very least, and not be pre-emptively destroyed because some suit in Bristol hates Harden for leaving Houston.

I am in love with this team. It’s the first time I’ve felt this level of excitement since Jimmy Butler was here because it’s the first time this team has true championship aspirations with Embiid. The stories you don’t hear nor see on these same shows are worth discussing and highlighting. We know the same person saying this Embiid-Harden duo won’t work will NEVER do a segment highlighting the amazing growth of Tyrese Maxey.

Embiid has overcome so much just to be healthy in the NBA. He even had to deal issues like his conditioning and the criticisms that followed. We had obvious busts like Markelle Fultz and Ben Simmons in the house, yet people were asking the same thing about Embiid because of the Raptors series – which he was pretty good in overall.

Hell no. I’m not letting some ignoramus from the outside create the narrative on who this team is or will be. Harden wanted to be here. That’s something we can’t forget when discussing the importance of players getting along. Nobody HAS to like each other on the floor, but it sure helps when they do.

The NBA is on notice, but so are you. People are coming to destroy this story because they know even the least-researched point will get publicity.

This is an amazing set of circumstances all parlayed into one ticket and nobody outside of this area is going to ruin it for me. The Sixers have the talent to compete for a championship trophy. They’ve traded dead weight for an elite scorer, the city – and country for that matter – is in desperate need of a positive story, and people seem to genuinely like spending time together on the Sixers.