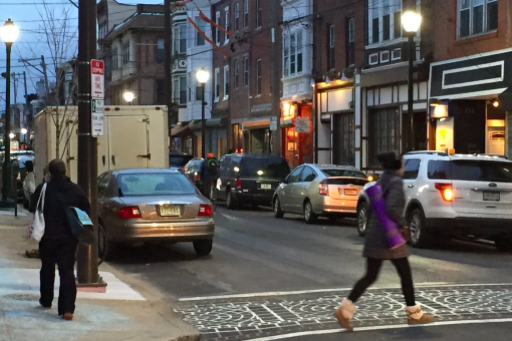 The quality of light along Fabric Row in Queen Village will now make for more navigable nights after the district received 38 new lamp posts as part of a city grant for streetscape improvements.

The LED lamps were unveiled Monday night as city officials and neighborhood groups gathered to celebrate the change of scenery on 4th Street from Lombard to Christian, according to Plan Philly. In addition to the street lamps, Fabric Row received 13 new trees and two decorative crosswalks at 4th and Bainbridge and 4th and South Street.

Funding for the improvements came from a $1.3 million city grant that tapped into the last money leftover from the Neighborhood Transformation Initiative launched by former Philadelphia Mayor John Street in 2001. The City Council had been holding onto those funds and was required to allocate them before January 2016.

The new LED lights have replaced the yellow-hued cobraheads that previously lined the area and were targeted as an area of improvement for pedestrian visibility at night. South Street Headhouse District executive director Mike Harris said the LEDs will be expanded in the coming months along South Street from Front to 11th streets.

The group hopes to continue the Fabric Row makeover by adding street furniture and planters in the near future. Once the primary home of Philadelphia's textile vendors, the district now contains boutiques, restaurants and third-generation textile shops.