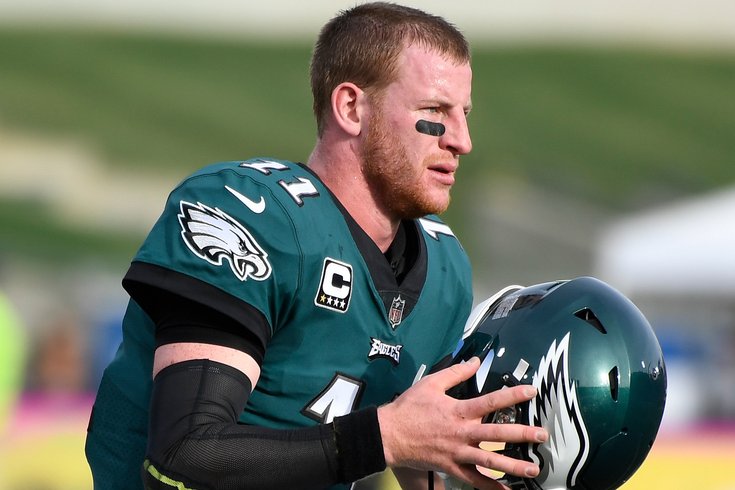 Philadelphia Eagles quarterback Carson Wentz.will have some unfinished business in 2018.

I am not typically one to brag, but last week we told you  — right here — to start Patrick Mahomes, Corey Clement and Chris Godwin last week. All three had monster fantasy outputs in Week 2 action.

Can we keep it going for a second week of right calls? Probably not. But we're going to try.

Here's a look at one player from each position to sit and to start in Week 3 if you have 'em on your fantasy football roster:

We know, the Eagles are depleted — for the moment — with Jay Ajayi, Darren Sproles, Alshon Jeffery and Mike Wallace sidelined due to injury. But Wentz will be amped for his return to the field and Philadelphia is always better at home. The Colts defense is also quite depleted. We like the young QB in this match up.

The Seahawks offense is a complete mess this season and mustered just 80 total yards in three quarters back in Week 2. This week against the Cowboys he will yet again feel the void of missing a properly functioning offensive line.

There are a lot of young running backs that are starting to emerge, but Lindsay has the makings of a consistent contributor in Denver after 107 yards on 14 carries last week. He played 12 more snaps than Royce Freeman and by pure volume alone, based on his first two games he is a must start.

In addition to being limited due to a rib injury, the off the field woes continue for the Bills top RB. He is a stay away, due both to his nagging ailments and a potential suspension somewhere down the line.

Watkins is reaping the benefits from being a part of one of the NFL's most dynamic offenses. Tyrek Hill is the No. 1, but Watkins is a high-powered No. 2 wideout catching passes from a free-firing Mahomes each week. He had 131 total yards last week and Kansas City has 811 yards through two games.

He is no longer the touchdown machine he once was, and has become a touchdown or bust kind of player in recent years — second fiddle to Emmanuel Sanders. Thomas has just three games of 100 or more yards in his last 34 starts.

Wentz is back — and that means his favorite target should continue to get targets. The big tight end has 16 catches over his first two games and has been Wentz' favorite target over the first two seasons he's been in the NFL. With Jeffery still out, Ertz will also be the red zone body to watch.

Seferian-Jenkins is a touchdown-dependent tight end and with Leonard Fournette likely back for Jacksonville, he'll be the centerpiece of red zone offensive schemes. Look elsewhere for tight end help.