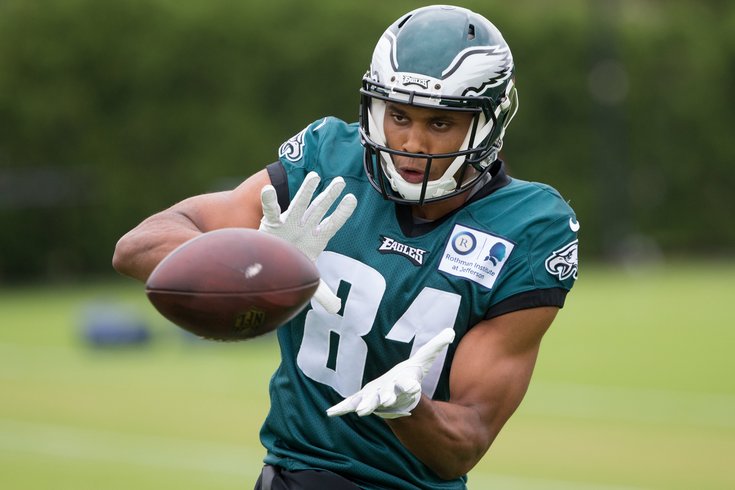 Here's a look at 10 players worth picking up in fantasy football for Week 3 of the 2018 NFL season.

Ryan Fitzpatrick, QB, TB — If you're in need of a quarterback this week and Fitzpatrick is still available in your league, then what are you waiting for?

With eight touchdowns and over 800 yards through his first two games, the former Harvard QB is off to his best start ever and proved his Week 1 performance against the Saints wasn't a fluke when he torched the Eagles on Sunday. Will the Fitzmagic run out this week? A date with a Steelers defense that just surrendered six touchdowns to Patrick Mahomes suggests it will not.

Blake Bortles, QB, JAX — If Fitzpatrick is already owned in your league, don't fret — you don't even have to leave the state of Florida to find another quality streaming option for Week 3. Bortles threw for 377 yards and four touchdowns against the Patriots on Sunday and faces a Titans defense that ranks near the bottom of the league in passing yards/attempt.

John Brown, WR, BAL — The speedy wideout isn't Joe Flacco's top receiver, but he's seen enough targets (14 in two games, including 10 in Week 2) that he should be added in both PPR and standard formats. After finding the end zone in each of the first two games, Brown now even more value. On the season, he has seven catches for 136 yards and those two scores.

We've got ourselves a ballgame.

DeSean Jackson, WR, TB — Most seasons, DeSean might not be the best option in PPR leagues, but when you look at the numbers he's put up in each of his first two games — not to mention the fact that he's caught every pass thrown his way — it doesn't really matter what format you play.

Currently, he leads the NFL in receiving yards and is second in the league in receiving touchdowns (A.J. Green has four). We don't know how long his quarterback will stay this hot — or what happens if/when Jameis Winston returns to the starting role — so take advantage while you can.

Jordan Matthews, WR, PHI — Matthews is back with his old team and will be catching passes from one of his best friends from the last time he was in Philly, Carson Wentz. Especially in PPR leagues, it's worth taking a flier on Matthews. That being said, with Nelson Agholor solidly entrenched as the team's slot receiver, it will be interesting to see how the Birds use Matthews, who was never known as a deep threat.

Giovani Bernard, RB, CLE — With Joe Mixon out for this week's game against the Panthers — and possibly a few more weeks beyond that — picking up Bernard isn't just a one-week move. His next two games (at CAR, at ATL) come against two defenses ranked near the bottom of the league in yards allowed per carry.

Corey Clement, RB, PHI — The Eagles activated Josh Adams from the practice squad in anticipation of Jay Ajayi possibly missing Sunday's game against the Colts. And that's good news for Corey Clement owners — or, in your case, future Corey Clement owners. Ajayi is currently day-to-day, as is fellow Eagles running back Darren Sproles — although there's less of a chance Sproles plays, according to Doug Pederson.

Clement may have only received six carries (for 30 yards and a TD) in a similar situation against the Bucs, but he also caught five passes for 55 yards in the game. He's worth picking up just in case Ajayi can't go — and is probably worth a start even if Ajayi plays. Like last week, Clement is only one Ajayi injury away from being the Eagles' featured back on Sunday.

Ben Watson, TE, NO — When Drew Brees is your quarterback, age is just a number. The 37-year-old tight end is still a legit red zone threat for the Saints, even if he hasn't been able to find the end zone through the first two games. With nine targets (and seven receptions) through the first two weeks, it's just a matter of time before he gets his first touchdown. Perhaps that can happen this week against the Falcons.

Dan Bailey, K, MIN — If you owned recently-waived Dan Carlson (like yours truly) or former Browns disaster Zane Gonzalez, then Bailey is a no-brainer. He's still got a leg, and while cold-weather outdoor games could make for some tough sledding later in the season, there's still time before you have to worry about that. You'll probably need to pick up another kicker before then, anyway. I'm guessing in early November, around Week 10. Just a hunch.

Cleveland Browns, D/ST — Let's get weird. Actually, it's a pretty smart play if you're looking to stream a defense. They've recorded eight takeaways and seven sacks already this season, and will host rookie Sam Darnold and the Jets on Thursday night. I actually think I'm going to pick them up right now...