Was Week 15 the worst, most frustrating and unfair in fantasy football history? 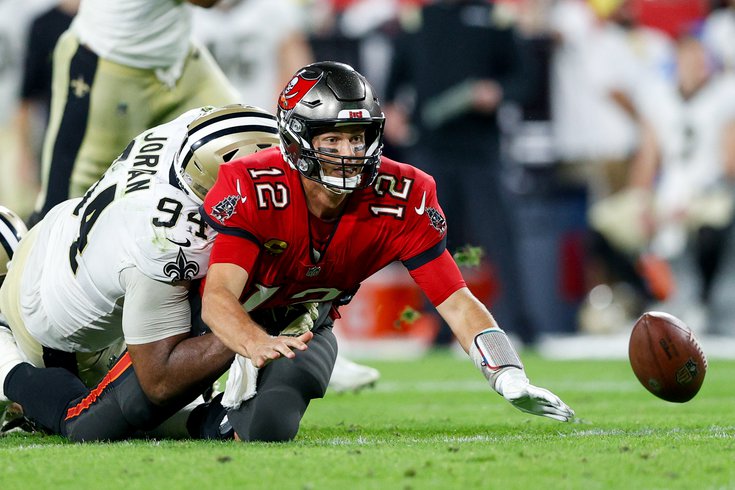 Tom Brady did... not have a good day on Sunday.

Last week got circled by almost every hardcore football fan. It's the week fantasy football playoffs start (in most leagues, or continue to the second round in others).

But, what went down over the last — counts fingers — six days of NFL action probably resulted in some of the most stressful, unfair and frustrating experiences for devoted fantasy football aficionados in the history of them obsessing over the game.

It would probably be hard to argue that what went down was not the worst week of fantasy football ever.

• After a decent Thursday Night game, things continued Saturday innocently enough, with the Colts beating the Patriots. But it wasn't without controversy. Jonathan Taylor — who is likely on a playoff team in almost every league out there — broke open a 67-yard TD run to clinch the game after being relatively quiet by his standards. He could have just stopped at the one-yard-line setting up three kneel-downs.

• Then on Friday, the NFL announced three games were being moved due to COVID issues. Did we mention there were COVID issues?

So the scheduling changes meant that not only did fantasy team owners need to follow along with the constantly changing COVID illness landscape, they had to be prepared to have backups for their game-time decision players now playing on Monday and Tuesday. Talk about high stress.

• Quarterbacks were a dumpster fire in Week 15. Here are three bad ones who played really good:

Did you notice that the third best fantasy score was just 20 points? That's because it was ugly for several top QBs.

*Wilson has missed three games but is typically among the elite signal-callers, and was drafted somewhere in the 5-to-8th QB range. He's had a bad season but with Lamar Jackson, Baker Mayfield and some others out, he may have been your backup plan.

All of these quarterbacks started their respective games and none of them got hurt. In Week 14, 12 different QBs had 20 or more points. This week is was seven. If you started one of those four, you probably lost.

• Skill players also sucked, hard. Here's a look at some of the top 35 preseason picks at wide receiver, running back and tight end, and how they finished in Week 15:

Okay, if you had a QB above, and were also relying on one of these typically productive stars, you almost definitely lost.

• It's also relevant to this article to mention that the freaking Lions beat the Cardinals (handily), the Saints blanked the Bucs, and there are now literally 10 teams (of 16 in total) in the AFC with exactly seven or eight wins.

• But wait, there's more. In addition to a ton of key players, like Darren Waller and Lamar Jackson not playing in Week 15, Chris Godwin tore his ACL, and teammates Mike Evans and Leonard Fournette each hurt their hamstrings for the Buccaneers. If you had any part of the Bucs, you probably lost.

So congratulations fantasy football lover. You spent all summer preparing for the draft. You stayed up late endlessly researching waiver pick ups and trade candidates and match up decisions. You overcame devastating injuries to Christian McCaffery or DeAndre Hopkins or Derrick Henry. And you somehow clawed your way into the playoffs riding high.

Fantasy football stories are kind of like bad beat stories in poker. No one really cares to hear them — we've got plenty of our own. But take some solace in knowing that the best, most knowledge player in almost everyone's league is not being rewarded for their prowess, at least not this season.

Time to start updating that 2022 draft board.