Also updates on Mike Williams, Matthew Stafford and others... 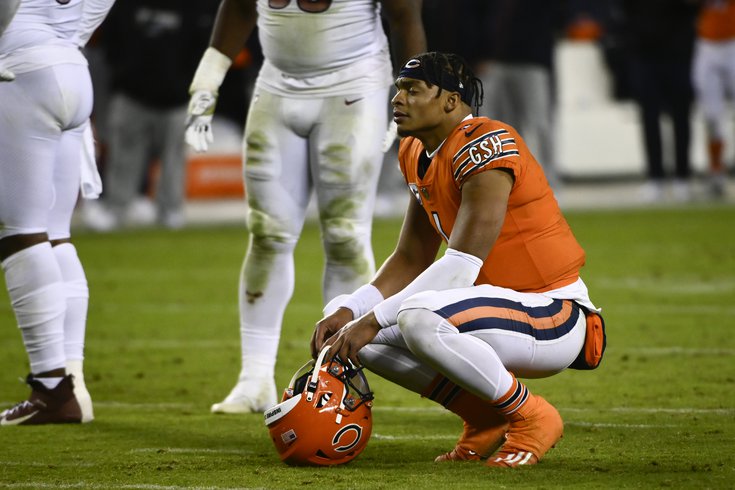 It will be a minor miracle if Justin Fields can even make it through this season in one piece.

Some big-name fantasy stars went down this past weekend, putting fantasy team managers in some tough spots with playoff positioning on the line.

Here's a brief rundown of the latest injuries to know about as we get ready to turn the calendar toward Thanksgiving and Week 12:

The Bears' mobile quarterback has been nothing short of a revelation over his last few games, with more than 40 fantasy points per game in his two prior games to Week 11. The dual-threat plays with reckless abandon and it seemed inevitable he would get banged up a bit, and he did this Sunday. Fields left with a shoulder injury that has a chance of not being serious, he was not seen wearing a sling, but a setback to him would potentially thwart several surging fantasy teams in the playoff hunt.

Mixon is another fantasy stud — he had a bonkers 53.10 points in Week 10 (via Yahoo!) — who could be on the bench next week. A concussion sidelined the running back after seven carries and his status next week will be up in the air. Samaje Perine had two touchdowns in his absence and will be a startable option next week if Mixon is out.

Atlanta's immensely talented and frustrating top tight end exited Week 11's game with a knee injury, but jogged off under his own power and is believed not to have torn any ligaments. An MRI revealed he has a torn MCL:

#Falcons TE Kyle Pitts' season is done after an MRI confirmed he has a torn MCL, per league source. @RapSheet 1st.

Another head injury — probably a concussion — took out another QB1 Sunday, as Stafford is in the protocol for the second week in a row. Bryce Perkins was the No. 2 in L.A.'s Week 11 loss.

An ankle injury was the culprit for Kansas City's top running back, knocking him out after just two carries. If the ankle is a serious ailment, both Isiah Pacheco and Jerick McKinnon will have some extra fantasy value going forward and could be starters against the Rams next weekend.

Williams returned from a high ankle sprain Sunday night, only to limp off the field after just one catch, nursing yet another ankle injury. His status will be up in the air as the injury gets evaluated. Joshua Palmer should be on everyone's radar after a breakout performance.

Edmonds has been almost a non-factor this year, following his trade to Denver, but the RB was carted off the field after just two carries with what seems to be a serious ankle injury in the Broncos' latest game.

In very deep leagues Warren has been serviceable as Najee Harris' understudy, but a hamstring injury knocked him out in Week 11 and he did not return.