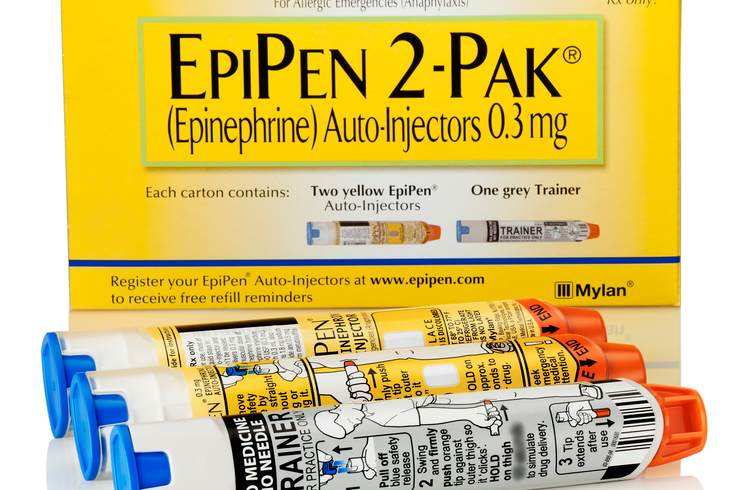 The EpiPen is sold by the Pennsylvania-based pharmaceutical company Mylan.

People who carry EpiPen devices to thwart life-threatening allergic attacks may soon have a cheaper option.

The U.S. Food and Drug Administration on Thursday approved the first generic competitor to the EpiPen and EpiPen Jr., autoinjectors that shoot the hormone epinephrine into the thigh to halt severe allergic reactions.

The approval awarded to Teva Pharmaceuticals delivers a blow to Mylan, a Pennsylvania-based pharmaceutical company that had cornered the market on the devices.

Mylan has come under fire in recent years for hiking EpiPen prices to more $600 for a twin pack, though it also offers its own generic version for $150 to $350. And in May, the FDA placed the product on its shortages list after repeated manufacturing delays.

FDA Commissioner Scott Gottlieb issued a statement lauding the approval of Teva's version as an attempt to provide greater access and lower costs to the life-saving devices.

"This approval means patients living with severe allergies who require constant access to life-saving epinephrine should have a lower-cost option, as well as another approved product to help protect against potential drug shortages," Gottlieb said.

The FDA previously had approved two other alternatives – Adrenaclick and Auvi-Q. But their designs differ slightly from the EpiPen. The Teva version will be an exact copy.

Mylan bought the marketing rights to EpiPen from Pfizer in 2007, initially selling the product for $57.

Dr. Elina Toskala said some of her patients at Jeanes Hospital in Philadelphia – part of the Temple University Health System – cannot afford EpiPens. Often times, they instead hold onto expired devices.

"These medications should be available for everybody who has severe allergic reactions," Toskala said. "When I give allergy shots, every patient should have an EpiPen with them in case they get an allergic reaction after the shot."

The Teva version could expand access depending on the price, Toskala said. The FDA's approval also could prompt other companies to develop generic version, potentially driving down the cost even farther.

"I think it's very good news, in general," Toskala said. "I hope we get very affordable EpiPens for everybody who needs it."

The devices help people prone to anaphylaxis, a severe allergic reaction caused by insect bites or stings, food, medications and latex. Injecting epinephrine into the body reduces swelling in the airway and increases blood flow in the veins.