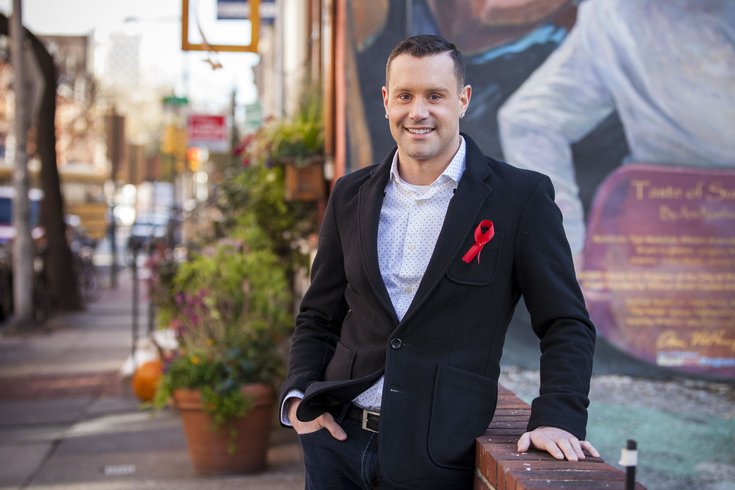 When Delaware County native Michael Tambon received his HIV diagnosis at 25, he initially reacted with the same panic anyone might feel through such an experience. But after 12 of his friends approached him to assuage his fears with their own stories of HIV diagnosis, the lightbulb went off that, in fact, he could turn his diagnosis into something bigger than himself: I need to speak up, he thought.

Tambon is the founder and co-organizer of "Code: Red," a 50-entertainers-strong fundraiser event (mostly consisting of drag queens) held annually at Voyeur Nightclub in support of AIDS Fund, Mazzoni Center and MANNA. It doubles as a way to de-stigmatize HIV through education efforts and the presence of people like Tambon, who lives with HIV openly. It takes the punch out of a disease that, while it doesn't have the same set of deadly implications it had three decades ago, still impacts an estimated 30,000 people in Greater Philadelphia.

Below, Tambon talks about his experiences as a person who's open about his status, what he makes of the Charlie Sheen chatter and why knowledge truly is power.

Can you describe what the experience was like when you were first diagnosed with HIV? What went through your mind when you got the news?

An HIV diagnosis is difficult for anyone to hear. On Jan. 23, 2012, I had a strange feeling that I was about to get told this frightening news when my family doctor called and asked me to come in as his last patient of the day to discuss my blood work results. I thought I was prepared for the worst when I went into the office, but when I was told that I had a positive test result, I went into a state of shock. I remember my thoughts being blurred -- everything went into slow motion, and a cold sweat ran through my body. My speech was slurred and I began to hyperventilate. I remember, however, all I wanted at that moment was my parents. My doctor called my parents to pick me up and console me, and they haven't left my side since that day. They wiped away my tears, held me close, told me that everything will be OK and together we will take care of this issue.

When you get tested for HIV, one of the first things you’re asked by a counselor or doctor is whether you have a support system to handle a diagnosis. It sounds like you had that?

I am extremely fortunate to have such an amazing support system in my life. Not only my parents, but all of my family members and friends have stood by my side and helped me realize that nothing has changed in my life except for a pencil scratch in my medical record and a daily antiretroviral pill. I think the support in my life gave me the confidence to become public about my health status and decide to be an activist for HIV.

It’s interesting that, on one hand, so many people still think of HIV as a death sentence, yet in younger populations, the problem seems to be the opposite: Many are complacent and don’t understand why they should be concerned about it. Or they still think it’s a gay disease. What do you make of that?

The reason why I decided to become active in the fight against HIV is because my diagnosis opened my eyes to the ignorance surrounding it. I, myself, was uneducated about the disease before I was diagnosed. After I was diagnosed I was told by a dozen of my friends that they, too, were recently diagnosed. I found out that we are living in an epidemic -- infection is at an all-time high. I feel like this is because there is a lack of fear surrounding HIV thanks to the enhancements of medical treatment. The younger generation didn’t experience the heartbreak and threat of HIV when it was known as the gay disease and was a death sentence to so many innocent victims 35 years ago. There is minimal communication about sex, and the use of contraceptives has decreased. It took me a year to feel comfortable with myself about being HIV-positive; I couldn’t keep quiet any longer and had to break my silence.

Our community needed to hear from a familiar voice to listen to the urgent message.

There are lots of ways to be supportive of the fight to end HIV stigma. Why did you decide to organize a drag fundraiser?

The medical advances in antiretroviral therapy making people who are positive 'undetectable' and the new protective medications, such as PrEP and PEP, has brought new vocabulary surrounding HIV. I wanted to create "Code: Red" for many reasons. I wanted to have a charity event where people come to enjoy a night of entertainment while receiving important information about treatment, prevention, vocabulary and available resources -- all while raising money for HIV organizations like Mazzoni, MANNA and AIDS Fund. By educating a community, you help end stigmas surrounding the topic.

Do you ever get backlash for being out about your HIV status?

Ignorance is all around us; it is human nature. I'm newly single, so I’m back in the dating scene. Of course, I’ve experienced some backlash about being openly positive, but the majority of the response has been positive. Speaking for myself, the negative response is a benefit to me because it makes me stronger emotionally and I focus my attention to those who are mature and interested in getting to know me as an individual. I have a huge respect for those who look past my HIV diagnosis and see me for me. I know, however, that the negative response is taken personally to others. Being called toxic, dirty, a slut and a murderer is insulting and can damper a person's self-esteem. I think we can change this issue with a simple resolution: education. Ignorance is defined as lack of knowledge or information. So, if we educate, we resolve ignorance.

What was your reaction to Charlie Sheen coming out, and the general reaction that followed?

I think Charlie Sheen coming out as HIV-positive is amazing. I give him a lot of credit for opening up in such a public spotlight. It takes a lot of strength.

Tambon: ... I made a mistake by having unsafe sex -- I can't deny that. But everyone makes mistakes in their lives. It is part of being human. I shouldn't have to be in shame for it. I am a responsible, healthy and happy person. HIV doesn't define me, but it is a part of me.

The general reaction that followed was a disappointment to me because it showed how much our society lacks knowledge surrounding the issue. Magazine covers that screamed "Charlie Sheen has AIDS" was a great example that people don’t know the vocabulary surround HIV/AIDS. Sheen opened up that he is medicated and undetectable. AIDS is not the correct terminology to describe his health status.

Also, talk show hosts have been so cruel -- I was in a waiting room and the TV show "The Talk" was on and the ladies were discussing Jenny McCarthy being upset that Sheen did not disclose his status to her for a kissing scene for a TV show. Sharon Osbourne said that it was unprofessional and he was endangering her health by not disclosing his status and the audience clapped in approval. Thankfully, Aisha Tyler was there to educate her co-star and the audience that HIV cannot be contracted by saliva and people shouldn't have to disclose their health conditions unless they are getting involved in sexual or risky behavior.

There’s been a lot of discussion on social media in the past two months about media’s tendency to victim-blame in interviews with people who are HIV-positive — namely, criticism for how the folks at "The View" and "The Today Show" have handled interviews with Danny Pinatauro and Charlie Sheen. What are some things people can do to be more sensitive when talking to HIV-positive people about their status?

I must say that in regards to the talk show hosts and interviewers, they are getting paid to cover the story so they should at least research the topic before they ask insensitive or inappropriate questions. There are tons of resources for them to find information on HIV/AIDS. One of my favorite websites is AIDS.gov, which is where I find most of my information. Educating yourself about HIV is the best way to respect a person with HIV. The knowledge is good for your own personal health to help you make the right choices on topics such as safe sex, regular testing and communication within an intimate relationship. The knowledge is also a good way to understand what it is like for someone living with HIV -- learning the vocabulary such as "undetectable" and the difference between HIV and AIDS. The knowledge will clear the ignorant stigmas surrounding HIV. I want to speak for myself by saying yes, I made a mistake by having unsafe sex -- I can't deny that. But everyone makes mistakes in their lives. It is part of being human. I shouldn't have to be in shame for it. I am a responsible, healthy and happy person. HIV doesn't define me, but it is a part of me. I'm just living life like anyone else.

What have you learned through doing the "Code: Red" fundraisers?

Since doing my "Code: Red" charity event, I’ve learned that my community is so ready to make a difference. Each year the attendance and the funds have risen. There has been such a mass response to the event this year that we sold out of VIP tables and seats in less than 24 hours. Everyone at the event wants to learn and support HIV prevention and resources. I love all of the entertainers and the behind-the-curtain helpers that donate their time and talent for the cause. I want to give a huge thank-you to Brandon Roberts, who is my "Code: Red" co-partner, who helped me make my vision a reality. I appreciate all the acknowledgment and awards I’ve received since I first started "Code: Red," but I share it with my "Code: Red" family because I couldn’t do it without them.

What does being 'fearless' mean to you?

Fearless, to me, is being confident in your mission. It is making yourself vulnerable by exposing your personal issues to make a change. It's knowing that you will face backlash for the things you’re going to say, but making sure you’re heard anyway.