Nobody summed up Philadelphia's opening night at TD Garden better than Joel Embiid, pressed on the status of the team's "rivalry" with the Boston Celtics. The way Embiid sees it, the Sixers have a lot of catching up to do in order to designate this matchup a rivalry.

Point taken. The Sixers not only lost to the Celtics on Tuesday night, it never felt particularly close as the game moved into the second half. And the worst part is, most of the problems Philadelphia had against the Celtics were predictable based on their personnel and what we already saw in last season's playoff series.

He wasn't out there for last year's playoff series, but the return of Markelle Fultz — which was supposed to solve some of these problems — has only brought them into clearer focus.

The absence of shooting does not just impact the perimeter players

You might get sick of me bringing this up eventually — and I suspect there are some of you who are already sick of me bringing it up — but Fultz being a bad shooter would be one thing. It would not be good, certainly, but if he was a willing shooter the Sixers would at least have a foundation to build from.

First two plays in this clip: Fultz with space to take longer jumpers vs. BOS tonight, conceding it to shoot around the paint

Final two plays in this clip: How Fultz used to attack *any* semblance of space he had to shoot, vs. BOS in Summer League pic.twitter.com/lbo83wDmNt

Those first two clips, of course, come after an offseason dedicated to Fultz reclaiming his jumper, a preseason in which he was anointed a starter because the team said he was playing his butt off in camp. But that is not the same player we saw in college or in Summer League, and there will be ramifications for the Sixers in the present, to say nothing of the future.

Joel Embiid is the backbone of this Sixers team, and Philadelphia is going to run a lot of offense through him in the post this year just like they have his entire Sixers career. And if Brown is committed to the idea of Fultz starting alongside Ben Simmons, Embiid's life may get more difficult as teams continue to disregard Philadelphia's perimeter players.

Terry Rozier's block of Embiid in the post was emphatic, and one of the big highlights Boston earned for the night. Look at how concentrated on Embiid Boston's entire defense is on this possession, and you can see how teams may tilt the floor vs. Embiid this year.

Is this an extreme example? Maybe. The addition of T.J. McConnell to this lineup didn't help matters and the positioning on the perimeter made it easier for Boston to ignore players. Embiid's tunnel vision — which evidently remains an issue — also gives Boston incentive to swarm on him, knowing he is susceptible to losing sight of other open players.

But this help defense comes in spite of the Sixers running action to get Redick the ball at the elbow specifically to feed Embiid in the post, and the end result is still impacted by Boston's total lack of fear of Philadelphia on the perimeter. The Celtics neutralized other Embiid post-ups before they could even materialize.

Teams should not be able to defend like this when Embiid is posting: 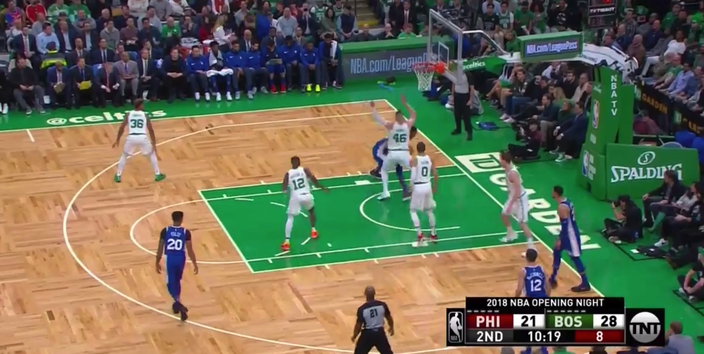 Running offense through the post is inefficient generally, and even with Embiid's considerable talent the Sixers can't afford to make his life more difficult with their personnel groupings. Only they have committed doing just that, because their internal path to hitting another level comes through developing Fultz.

After committing pretty firmly to Fultz being the starter at off-guard to kick off the preseason, Brown already began to hedge as the preseason wound to a close. The decision to start Redick in the second half was presented as a neutral move as far as Fultz is concerned, an effort to get him more reps in his natural position of point guard.

It only took one game for that to look like a whole lot of nonsense. On the bench to start the second half, Fultz didn't enter the game until the 3:13 mark of the third quarter, and when he finally got back on the court he was pushed to the side by fan favorite T.J. McConnell, who you may have noticed is a point guard.

Positional designation is something usually worth glossing over with how the game is played now. It isn't here. Fultz came into the game in the second half and instead of running the offense was basically a passenger, often standing in the corner doing nothing of consequence.

In the measly three minutes Fultz managed in the second half, most of his possessions ended up looking something like this:

Brown's explanation for how he used Fultz in the second half didn't exactly clear things up:

Well I already declared to everybody that I was going to start JJ and go back to that group, and our memories of TJ, you know, in this building against Boston are strong, he had a hell of a series last time we were here. And I think when you look at the volume of minutes Markelle ended up with, that's kind of what I expected, play half a game, try as best I can, try as best I can to get him the majority of those as point guard. When Ben to the four in the first half with Dario's foul trouble, he did do that but for all those types of reasons. And as I said to everybody and I'll say it again: Markelle is going to have steady, slow growth.

Let's just call this what it is — an unspoken demotion. Saying you want to try a different lineup configuration for best developmental practices is one thing, actually using game reps to do so against a division rival is another. And Brown has so far shown that when push comes to shove, McConnell is going to have his trust to run the team.

As Mobb Deep famously quipped, there's no such thing as halfway crooks. If you want to develop Fultz at the point guard spot, go ahead and do it.

Depth, on the bench and in star talent, is still holding Philly back

The returns of Kyrie Irving and Gordon Hayward were advertised as the major additions for the Celtics for this season, and rightfully so. But the duo shot a combined 6/26 from the field against the Sixers on Tuesday and Boston still ended up winning by nearly 20 points.

The case for believing the Sixers will eventually best the Celtics in the playoffs rests on their top-end talent. There were flashes throughout the game where Embiid and Simmons looked like the best players on the floor and were the only reason the game didn't get away from Philadelphia sooner. But their flaws are still on display, and Boston's current advantage is a direct product of a clear, constant vision from management from years past.

With due respect to Wilson Chandler and Mike Muscala (and Zhaire Smith, out until at least December), their absence should not be forcing the Sixers into lineups like one we saw in the third quarter on Tuesday: McConnell, Fultz, Landry Shamet, Saric, Amir Johnson. As the NBA has moved toward employing as many switchable wings as possible, the Sixers seem hopelessly stuck on either side of the size and athleticism spectrum.

It's even more unforgivable that this is the case when one of your tentpole stars is Simmons, whose combo of skill, height, and athleticism gives you the liberty to build unique lineups. But the Bryan Colangelo era produced not a single athletic wing of consequence, and the Sixers are suffering for it.

The Sixers tried to start addressing that by drafting Smith this past June, but to be a team of consequence they need players who can't be punished habitually on switches. McConnell is a competitor, but there is never a time when he should be the default defensive option on Gordon Hayward, who he is giving up at least half a foot to:

Boston is no juggernaut on offense, but the amount of guys they have who can put it on the floor makes it easier for them to hunt the weak links in the Sixers' defensive chain. It will not matter that Philadelphia could one day have the best top-end talent in this matchup if the Celtics can hunt mismatches to the degree they can and have against the Sixers recently.

The biggest indictment of the last few years of management is the scarcity of players on Philadelphia's roster who can be put in the lineup without having to make a major sacrifice. In games that matter, the Sixers should not have to make a choice between size or skill, defense or dribbling, or any number of critical components to a successful basketball team.

But they are, and they will continue to play catch-up with Boston until that problem is rectified.