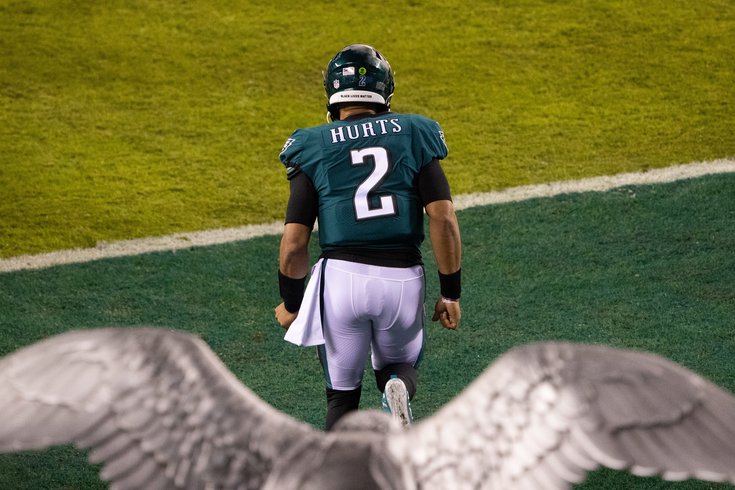 The Eagles in a dogfight with Washington Football Team, trailing just 17-14 at halftime after a late touchdown pushed Washington in front.

• It isn't helpful for the Eagles in any way, but Jalen Hurts' touchdown drive to open the second quarter showed you some of his promise as a potential starter down the line. It was not the best half of football he has played so far or really anywhere close, but with very little help and nothing to play for, Hurts nonetheless came up with six points on a play that looked totally busted on first glance

.@JalenHurts jukes for the TD! #FlyEaglesFly

Capitalizing on a terrific catch from JJ Arcega-Whiteside on third down, Hurts made it a Sunday double with another rushing touchdown midway through the second quarter, putting the Eagles in front in relatively improbable fashion. That play to JJAW was a great flash from the young QB — he bought time with his legs and moved the pocket, but he kept his eyes downfield instead of trying to do it all himself, a decision he was rewarded for and needs to repeat in the future.

As he did after a tough start in Arizona, Hurts quickly rebounded from a bad start on Sunday night, shaking off an interception and a few missed throws to keep Philadelphia within striking distance. That's not a good thing for Philadelphia's draft interests, but Hurts' competitive fire did not allow him to take off the final week, and at the very least he has shown he deserves a shot to compete for the starting gig in camp next year.

• A guy whose season and first half performance I am going to hold against him? Jalen Reagor. It's not his fault the Eagles took him over a significantly better receiver in Justin Jefferson, but he is never going to be able to escape comparisons to the Vikings' rookie stud. The problem is that Reagor has been underwhelming even without the connection to a record-breaking rookie, failing to make use of the tools he has and rarely flashing anything special this season.

There's a lot of stuff that requires projection and in-depth analysis the likes of which I don't have time for while also covering the Sixers, like Reagor's route-running skills and fit within the scheme, and some stuff that's armchair psychology at best, like his competitive fire. Here's the more concerning thing: there's maybe one or two times all season where I can remember Reagor's speed feeling like it mattered. That was a big part of the reason this team decided to draft him over other options, and he seems like a classic case of a guy whose tools aren't functional. It's not like we've seen him routinely separate from opponents only to be failed by his quarterbacks. He hasn't been a huge threat on gadget run plays. He has just sort of been there, running unsuccessful routes and occasionally dropping passes thrown his way.

Forget Jefferson, there are productive wide receivers on other teams who were selected even further down in the draft, producing for good teams and bad teams alike. Reagor just hasn't been very good, and he has been bad enough that they have to consider wide receiver a position of need in the 2021 draft, a terrible outcome after all the resources they invested at the position in the 2020 Draft.

And his year will end with a whimper — Reagor was removed from the game late in the half and almost immediately ruled out for the game with what the team called a head injury. Here's hoping 2021 is more fruitful for the kid.

• Even by Week 17 standards, this was a painfully boring first half of football. Washington controlled the clock with some classic Alex Smith football, throwing screen after screen on their opening drive and never looking much further than seven yards down the field. Philadelphia's offense didn't feature a whole lot more dynamism, with Hurts taking a couple deep shots and otherwise leading a ground-and-pound offense (if you can call it one with Boston Scott as the featured back).

Put us all out of our misery already.

• Punting on fourth-and-two at midfield is a decision I would normally try to publicly humiliate Doug Pederson for. If we are under the assumption it's a tank-friendly move for a coach who appears to be coming back, it's a bit different.

• I understand the appeal of a "Win and you're in game!" for a nationwide audience, but the only way that appeals to the public is if both teams have something to play for in the game. Pushing this to Sunday Night Football was a goofy decision the moment it happened, looked dumb as soon as the game started, and made 90 percent of all Eagles fans (at least) miserable for having to wait until 8:20 pm to see their favorite team stink it up with a bunch of backups.

On the plus side, I had enough time to slow cook some salsa chicken, scratch make a sauce, and put together homemade taquitos to eat before the game, so I feel like I'm the winner of Sunday if nobody else is.

• JJ Arcega-Whitside came up with two really tough catches in the first half, something you'd normally be willing to celebrate and place in The Good for a game. So why place Hurts up top on his own and the disappointing second-round receiver in The Ugly? Because this is legitimately the last time the Eagles could use production from JJAW. Hurts and a number of other guys who suited up Sunday have come through for the Birds when the games have actually mattered. JJAW producing in a game where they'd actually be better off if he sucked would accomplish the impossible, making fans dislike him/the draft pick used on him even more.

For the first time in your professional career, fans are begging for you to drop the ball, fail to separate, fumble, tip the ball into the hands of a defender, whatever it is you have to do in order to facilitate better draft positioning for the franchise. Talk about bad timing.

• Nothing says, "Your 2020 Philadelphia Eagles!" quite like Travis Fulgham limping to the sideline following the first play from scrimmage. It's no wonder so many important players took the night off — why bother risking your health to participate in this slop?

To really drive the point home:

The medical table that all the injured #Eagles player sit on to get treated broke. The team is bringing out a new one.

We'll discuss some big-picture stuff in Final Observations so you're not sifting through two articles of this garbage.

• The difference between picking sixth and ninth in the 2021 Draft is potentially enormous. I don't care if you have to play Jason Kelce at quarterback in the second half, the Eagles should be doing whatever they can to make sure they set themselves up for the future.