For the first time ever, the Philadelphia Union survived the expansion draft 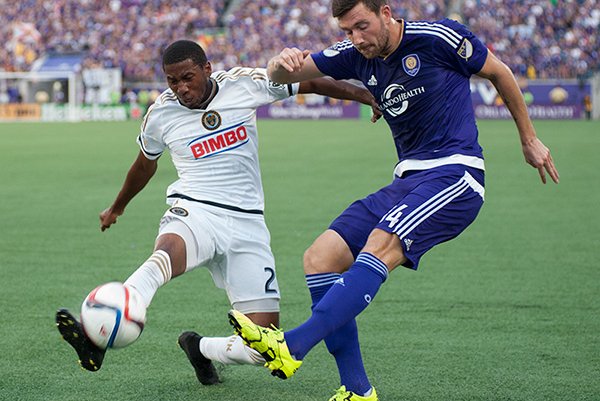 This is not a huge surprise. Other teams had more enticing lists of available players, while the best Union option was probably fullback Ray Gaddis or center back Ken Tribbett.

This was the first time that Philly has made it through the expansion draft without losing a player. The Union had to give up Alejandro Moreno and Shea Salinas in 2010. Justin Mapp went to Montreal in 2011 and Orlando scooped up Pedro Ribeiro in 2014.

Roster-wise, Atlanta is a bit further ahead than Minnesota at this point. As in years past, a number of trades went down almost immediately after the draft process.

• He's a solid utility fullback who can play on the left or the right side. Toia spent the latter half of 2016 backing up Ambroise Oyongo and Hassoun Camara.

• Minnesota grabbed the young American fullback and flipped him to Montreal for Costa Rica international winger Johan Venegas. I would have kept Duvall, but Venegas is a guy who might shine with a change of scenery.

• He'll be a regular starter if he can avoid the injuries. Loyd was the ultimate glue-guy in Dallas and filled a lot of different roles for Oscar Pareja and Schellas Hyndman.

• A veteran defensive midfielder who is now headed to his fifth MLS team. He's still only 28-years old.

• With Brad Guzan headed to Atlanta, Irwin was traded back to TFC for Mark Bloom and allocation money. Easy wheel and deal for United.

• I think he's incredibly underrated. Saied just didn't play a ton of minutes in Columbus because they had a really good pairing of Wil Trapp and Tony Tchani at the No. 6 and No. 8 spots. Saeid is a guy who can play both roles and will start 30-plus games for the Loons next season.

• I thought Minnesota might go for Ambrose because of his connection to Adrian Heath at Orlando City. This is a good value pick. Ambrose is a young outside back with a lot of upside.

• He's a good goalkeeper. The only reason he didn't play more is because he was stuck behind Nick Rimando.

• Kann will likely backup Guzan after Irwin is traded.

• A surprise selection for me. Femi was a third round draft pick and scored two goals in 19 rookie appearances. He'll get a shot to earn a starting job for the expansion club.

A few other notes:

• I was surprised that Colorado got through this unscathed. They decided to protect two goalkeepers and left Jared Watts exposed instead. If I was Minnesota or Atlanta, Watts would have been my first selection. I also would have went for fullback Mekeil Williams, but his status as an international made Toia more appealing.

Mildly shocked that Jared Watts didn't go off the board in the expansion draft.

• Alex Bono is a capable starter for Toronto. Even if TFC didn't trade back for Irwin, they would have been fine with Bloom. They also kept Steven Beitashour and Tosaint Ricketts.

• Harry Shipp became ineligible for selection after Toia was taken by Atlanta. I would have used my second pick on Shipp.

• Ex-Union players Sebastien Le Toux, Cristian Maidana, Amobi Okugo, Jack McInerney, and Sheanon Williams all went undrafted. One of those guys might be traded in the coming days.

• I thought Minnesota might go for Damion Lowe, the ex-Reading player and past Union draft target. Lowe is a Seattle player who spent a season on-loan in Minneapolis-St Paul.