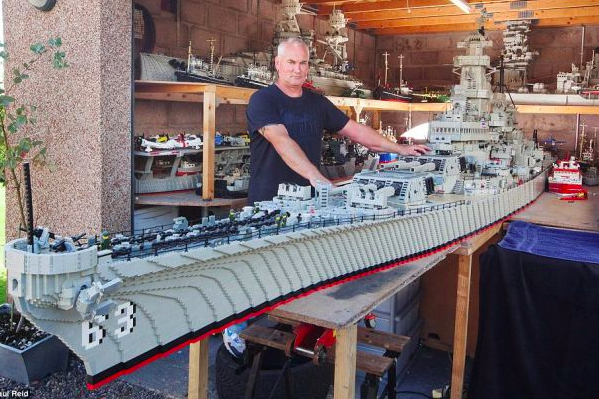 Jim McDonough pictured with his 1:40 Lego replica of the USS Missouri, a labor of love that took the Scottish fisherman three years to complete.

A Scottish fisherman obsessed with naval history and Legos has captured international attention after completing a three-year project to construct a replica of the World War II battleship USS Missouri.

Jim McDonough put painstaking attention into the Lego model, which measures in at a massive 4' 6'' in height, 3' in width and 24' 3'' in length, Gizmodo reports.

The USS Missouri, an Iowa-class battleship, has an illustrious record of service. She served in the Pacific Theater at Iwo Jima and Okinawa, where Japan officially surrendered to the United States, and was also utilized during the Korean War. She was decommissioned until the mid-1980s, when she was reactivated to provide support in Operation Desert Storm. Since 1992, she has served as a museum ship at Pearl Harbor.

McDonough, 51, has also created replicas of a Japanese destroyer, a Japanese military transport and a Star Wars X-wing fighter.

Two amazing facts stand out about McDonoough's USS Missouri replica. First, he didn't use any glue at all in his creation, a real structural accomplishment for a model of this size, to say the least. Second, it's not even the biggest USS Missouri replica. That distinction belongs to American Dan Siskind, whose replica measures over 25 feet in length. Siskind talks about his version in the video below.

As nice as it is, the edge has to go to McDonough, whose exacting detail and refusal to use glue make his worthy of all the acclaim he's receiving.