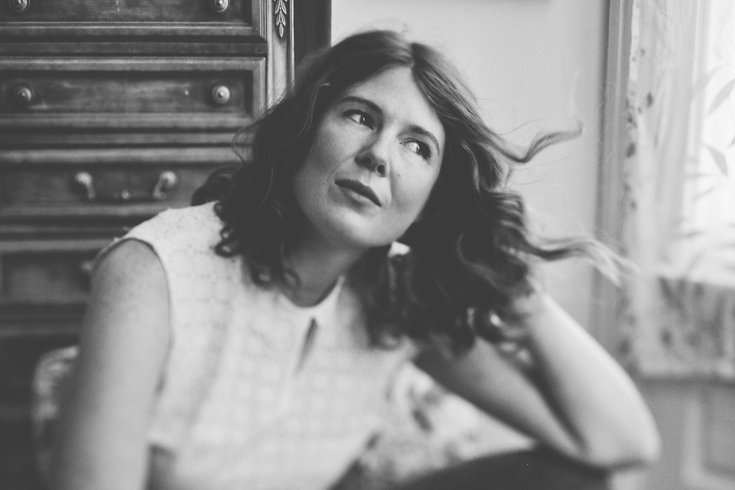 You never know what you’re gonna get from Siltbreeze Records — messy American rock? droney Kiwi lo-fi? experimental noise from parts unknown? — but the debut record by Philly psych-folk singer Rosali is especially unexpected. "Out of Love" is dark and sweet and deeply honest, usually just an acoustic guitar and earnest, slightly ethereal vocals. Rosali (last name Middleman; you might have seen her spooky old band Blood Like Mine) is just wrapping up her first tour as a solo artist. Last night she was in Charlotte, North Carolina, and we caught upvia via email, just hours after she saw The Cure in concert.

You play pretty, sometimes stark music. It can get a little louder — like “All Day Long,” which I love — but mostly you need people to shut up and pay attention. What do you do to make that happen? Is it a struggle?

So far it hasn't been a struggle with audiences, they've been very generous with their attention. Maybe it's my sincerity. I have started sets that I've had to play over the classic bar noise but I either ignore it or have had audience members tell people to shut up. Really the struggle is in my own head to let go enough to make a great show.

What are you doing on Siltbreeze with all those noisy lo-fi bands?

As legend has it, a mutual friend recommended me to Tom Lax and he approached me about putting out a record. I'd already been working and recording "Out of Love" but I told him that maybe it was too straight forward for Siltbreeze. He'd expressed interest in my previous duo, Blood Like Mine, which sounds right at home on the label. But we were taking our time finishing up the material and at one [point he] offered to release it “Out of Love” and I happily agreed. I don't think of everything on the label as being noisy, though I know that is what people associate it with. Like the Sarah Mary Chadwick release from last year is pretty crushingly sensitive. Also, I'm happy my record doesn't come across as lo-fi, though it was basically a home recording. Just had some really great help with recording from the most talented Gerhardt Koerner. And James Plotkin beautifully mastered it.

“Your Song” strikes me as funny and serious at the same time — like the woman asking a lover whether he’ll still be there when her breasts sag to the ground. What inspired this song?

You are the only person who has ever told me they found that song funny. It's quite serious and though maybe the imagery of saggy boobs is humorous to some, it is about wanting assurance that it's about more than physical attraction. I think it's safe to say it's something many women, and maybe men think about. It's also a love song with the main refrain being about lovers having a private language that extends beyond words.

Was this your first tour as a solo artist? What was it like?

Yes, I just finished a mini tour opening for Mary Lattimore, and it was my first time out. We had a wonderful time, very relaxed with receptive audiences and some friendly faces along the way. I was kicking a nasty cold so my voice wasn't where I wanted it to be, but I ended up having some pretty good shows. We loved playing the Tiny Bar at the Black Iris Gallery in Richmond, it was a special place. Same with Clovene in Louisville.

Okay, you just saw The Cure earlier tonight. How did they look/sound? Were you a big Cure fan back in the day?

They were great. Played four encores. I was and still am a fan. I remember asking my dad, also a musician, to help me learn “Friday I'm In Love” on guitar when I was maybe 14, but I don't think he was interested because he never did.