Five over/unders for Eagles’ Week 6 matchup against the Redskins 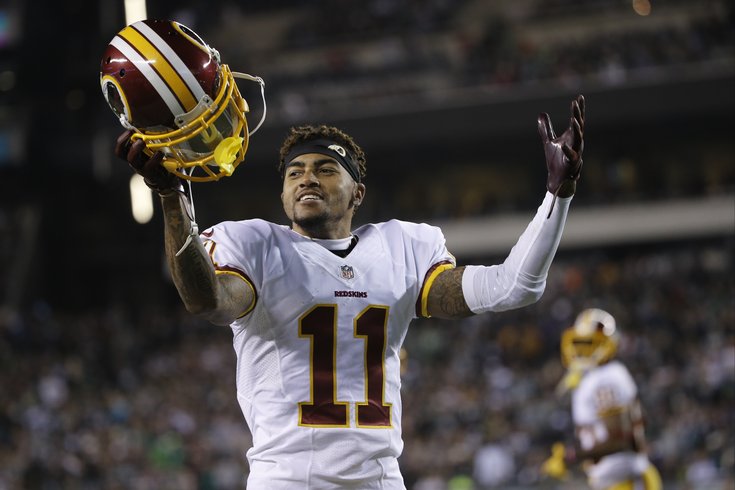 Will Washington Redskins wideout DeSean Jackson give his former team trouble on Sunday?

For the first time in his NFL career, Philadelphia Eagles quarterback Carson Wentz will face an NFC East opponent on Sunday when the Birds visit the Washington Redskins. It will also be the first time he's had to rebound after a loss.

But in this, his rookie season, the "firsts" are going to continue for the 23-year-old from North Dakota, and picking up his first division win would go a long way towards re-establishing the Eagles as the team to beat in the NFC East. It would also prevent one loss from turning into two, which could turn into three when Sam Bradford and the undefeated Vikings come to Philly next week.

Essentially, the Birds need this one.

Here's a look at five numbers to keep an eye on throughout the game on Sunday.

That’s the current total being offered at topbet.eu -- up from 44.5 yesterday -- and I think that’s way too low. I know the Eagles are no longer running Chip Kelly’s uptempo offense, but if you look back at their recent history against the Redskins, there’s good reason to believe that they’ll hit the over. They’re averaging 52.27 combined points per game in their last 11 meetings and nearly 55 points per game over their last six. Furthermore, three of their last four meeting would have hit the over.

This season, the Birds are averaging 28.75 PPG, while the Redskins are at 23 per game. And while the Eagles defense has allowed the fewest points of any team in the league, there’s something about these games that always seems to lead to a lot of scoring.

In three career games against the Eagles, Jackson has been a microcosm of his own career. In total, he has 13 catches for 283 yards and touchdown, but he’s been very hit or miss.

That’s kind of what we’ve seen from him this season as well.

It’s uncertain what DeSean we’ll get on Sunday, but if he’s really interested in playing for the Eagles again, he’d do better to keep to his most recent numbers. If he has a few more games against his former team like the ones he had in his first season with the ‘Skins, he’s going to have a really hard time getting that Rod Tidwell “kwan” from Eagles fans. It’s always hard to predict what Jackson is going to do, especially since one reception could be the difference between a bad game and a great game (depending on how much open field there is in front of him), but without Jordan Reed to steal some of the attention away — and not to mention a run game that leaves much to be desired — there’s a chance he could struggle.

However, there have been spots this season where the Eagles secondary has struggled against deep throws to speedy receivers (see: Terrelle Pryor, Sammie Coates, Alshon Jeffrey). They allowed at least one throw of over 40 yards in each of their first three games. And although they were able to avoid that against the Lions, they did allow three straight scoring drives to open the game, all of which ended with passing TDs. I expect a little bit of a mixed bag this week…

After an awful start against the Lions, Jim Schwartz’s defense balled out in the second half, holding Detroit to just three points (which came on a short field following the Ryan Mathews fumble) and forcing a timely turnover of their own. Everything starts with Fletcher Cox, who leads the team with four sacks — and should have had another against the Lions, but was hit with a personal foul for ripping Matthew Stafford’s head clean off his body.

Unfortunately, he’s questionable with an ankle injury and was limited in Friday’s practice, but there’s a good chance you see him out there on Sunday, even if it’s in a somewhat limited role. If he is out, however, his absence will have a trickle-down effect on Brandon Graham (3 sacks) and Bennie Logan (2) as the Redskins will no longer be forced to double-team Cox in the middle.

But there’s a reason the Eagles are tied for the fifth-most sacks in the NFL (14) and are getting to the QB at a rate higher than any other team in the league (one every 8.86 pass attempts) So no matter how much Cox is able to give, there’s good chance Schwartz figures out a way to put pressure on the opposing quarterback, even if he doesn’t know his name.

Q: What has Cousins shown you on tape?

Last week’s loss to the Lions was the first game all season in which the Eagles had all three tight ends active, but that didn’t translate to added production for a position many believed to be a strength of the offense when the season began. Wentz threw to his TEs a season-low five times in Detroit (Zach Ertz 3, Trey Burton 2, Brent Celek 0) after targeting them at least eight times in each of his first three NFL games.

Coincidentally, Week 5 was also the first time the Birds faced a deficit of more than four points, and spent much of the afternoon playing from behind.  Add to that the fact that they ran a season-low 57 plays in the loss and lost the time-of-possession battle, something they’d dominated in their first three games, and you can see why tight end production was down.

That should pick up this week against a Washington team that has allowed at least five receptions by tight ends in all five of their games, including 11 last week against the Ravens and 24 in their last three games combined. It’s unclear what cornerback Josh Norman’s role will be on Sunday — will he cover Jordan Matthews in the slot, split time on the outside between Nelson Agholor, DGB and Josh Huff, or some combination of the two? — but the one thing Wentz can bank on is that Norman won’t be covering Ertz, Celek and Burton. So if he wants to avoid the opposition’s most dangerous weapon on defense, tight end seems to be a good place to start.

Wentz has thrown for multiple touchdowns in three of his four games, including two straight, but he’s yet to get three in one game. The Redskins, on the other hand, have allowed multiple passing touchdowns just once this season (Week 1 vs. Big Ben) and in their four games since, have held opposing quarterbacks to three touchdown passes combined, despite facing at least 38 attempts in each game. Coincidentally, Wentz’s season high for pass attempts is just 37, and against a run defense that has surrendered a rushing TD in four of their five games — and two rushing TDs in three of those games — there’s a good chance Pederson and co. rely heavily on the ground game in this one.