Five reasons for optimism at the conclusion of Eagles training camp 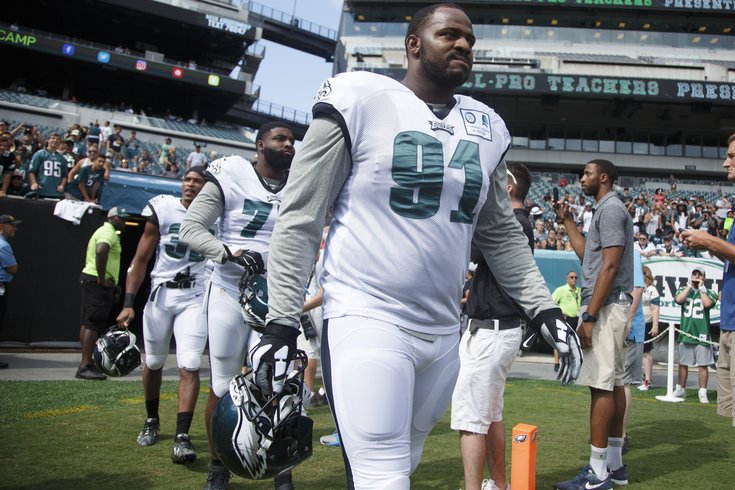 Led by their defensive line and their safeties, the Eagles' defense could be really good in 2016.

There is not much optimism surrounding the Philadelphia Eagles' 2016 season, nor should there be. The Eagles have had a myriad of off-the-field issues to go along with quite a few on-the-field concerns.

Still, they aren't hopeless. Later today, we'll look at five reasons for pessimism surrounding the team, but first, let's point out the good.

Obviously, Fletcher Cox is a beast, and he's going to be playing in a defense that is going to force opposing guards to have to try to block him one-on-one. That's not going to go well for them. If opposing offenses try to over-commit to slowing down Cox, the rest of the line has more than enough firepower in Vinny Curry, Brandon Graham, Connor Barwin, and Bennie Logan to make them pay.

In Jim Schwartz's scheme, the defensive line is going to be asked to get to the quarterback without the help of blitzes, and they will.

Bad safety play has become an epidemic in the NFL over the last half-decade or so, with most teams having some kind of serious concern on the back end. Not so with the 2016 Eagles. Malcolm Jenkins and Rodney McLeod form one of the best safety tandems in the NFL, and they both played well all throughout training camp.

3) Heavier utilization of the tight ends

The most obvious strength of the Eagles' offense from a personnel perspective is their tight end position. Throughout camp and the first preseason game, the Eagles have shown that they are going to use a lot of two- and three-tight end sets. As we showed in a film breakdown a week ago, the Chiefs had quite a bit of success when they employed multiple tight end sets while Doug Pederson was in Kansas City. With three very good tight ends in Zach Ertz, Brent Celek, and Trey Burton, the Eagles can create mismatches for opposing defenses both in the running game and passing game.

4) They have their health?

We have to reach a little bit here, out of necessity. The Eagles will be without six players heading into their second preseason game. They are LB Mychal Kendricks, DT Mike Martin, WR Jordan Matthews, CB Jalen Mills, WR Hunter Sharp, and of course, QB Carson Wentz. However, all of those players are expected to be ready for the regular season. The Eagles made it through training camp without any devastating injuries, although obviously the likely Lane Johnson suspension will be a killer.

To recap, Wentz has everything you want physically in a quarterback -- size, arm strength, and athleticism. He also has an aggressive mindset with improvisational skills, as well as a particularly intriguing ability to move around in the pocket and throw on the run. On the downside, he could certainly be more consistent with his accuracy, and he'll occasionally lock onto receivers, telegraphing to the defense where he's going with the football.

But very clearly, the Eagles have something potentially special to work with here. No matter how bad this season may get, there will always at least be some hope that Wentz can be a franchise quarterback for the next 10-plus years.