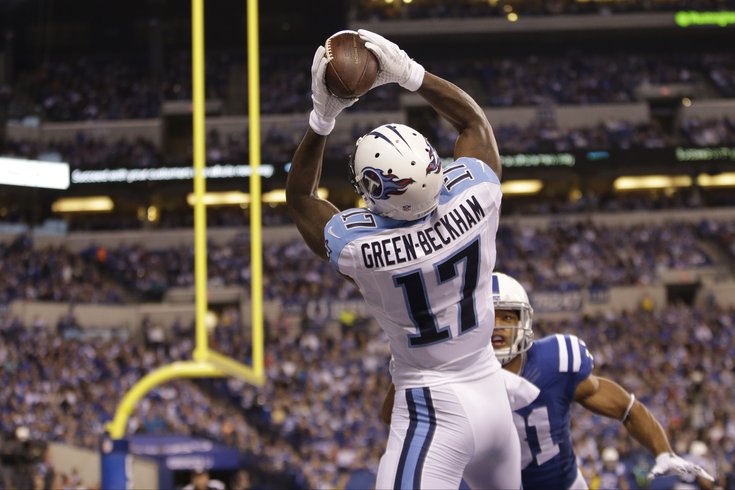 If you watched the Philadelphia Eagles offense play on Thursday night, you likely noticed two areas in which the team could really use some help. So perhaps that's why it caught so many people off guard Tuesday morning when general manager Howie Roseman announced that he had sacrificed depth at one of those positions (offensive line) in order to improve the other (wide receiver).

The Birds acquired Dorial Green-Beckham, the 40th-overall pick in the 2015 draft, from the Titans in exchange for backup tackle Dennis Kelly.

"The reason these trade talks got started was because [the Titans] have so much depth at the receiver position," Roseman said following Tuesday's practice. "They have a good mix of veterans and youth there and with the relationship we have with that organization, [GM] Jon Robinson, we felt comfortable kind of having these discussions, these open conversations.

"They were looking for a tackle. We weren't looking to move Dennis [Kelly], but because of the depth they had at that position, it was kind of a win-win situation."

Part of the reason the team combined for just 114 receiving yards on 36 pass attempts in the 17-9 win was abysmal play from their wideouts that included more than a few dropped passes. And yes, the team's best receiver, Jordan Matthews, was out with a knee injury that isn't likely to carry over into the regular season, but even his return would leave quarterback Sam Bradford with a less-than-desirable group of targets.

While the 6-foot-5, 235-pound Green-Beckham comes with his own set of off-field issues (more on that later), it's his size and raw ability that has Roseman and head coach Doug Pederson excited.

"He's got a rare skill-set," Roseman said. "Now there's a reason that he's available at this time. He's got to get more consistent like we're talking about, but for us and where we are in development we thought it was a risk worth taking."

As for how that will translate to Pederson's system, the rookie coach sees several areas in which he can contribute.

"He's a big powerful guy and he runs extremely well as far as slant routes go," he said when asked to evaluate his new wideout. "He's a big physical presence right there. I think in the red zone, he's got a good vertical leap, he can elevate quickly, he can get over the top of defenders."

But what does this mean for the team's current receivers not named Matthews -- guys like Josh Huff, Nelson Agholor, Rueben Randle and Chris Givens, among others?

First, it likely means that one fewer of them will still be around after the roster is trimmed all the way down to 53 guys. Depending on what side you're standing on -- the player's or the coach's -- that added competition can be viewed very differently. The overall message it sends, however, is one that both the coaching staff and front office have preached all summer long.

"All along, my stance has always been about competition at every position," Pederson said. "Obviously, that goes back to the quarterback issue way back in the spring. And this is no different. ... We've just got to continue to evaluate every position and if we can get players in here that can compete, we want to do that. We want to take advantage of these situations."

"I think it's a message to the whole team that we're going to try to upgrade our talent level anyway we can," Roseman added. "That's hard this time of year, but that's the kind of competition we want to have here."

But given that the GM has always referred to offensive line as a "continuity position," the decision to trade a guy in Kelly who has been around long enough to develop said continuity with the rest of the Eagles offensive lineman (if nothing else) -- especially with a possible 10-game suspension looming for Lane Johnson -- the team clearly sees the wide receiver position as one that really needs an upgrade.

"I think it's like other positions: at this point in camp, there's some inconsistency day-to-day," Roseman said. "Overall, that's what happens when you're evaluating guys every day over minicamps, OTAs and training camp. But they're young players, a lot of young players at that position. And we're going to look to improve our depth at any position. But certainly, when we looked at that position, we were actively working the phones and trying to find fits for our football team."

One of those young players who has failed to live up to expectations so far is second-year player Nelson Agholor, who was drafted 20th-overall last year but recorded just 23 catches for 283 yards and a touchdown. By comparison, Green-Beckham caught 32 passes for 549 yards and four touchdowns. While that may not seem like a lot, he led all Titans wideouts in yards and touchdowns -- that, of course, doesn't include tight end Delanie Walker, who racked up 94 catches for 1,088 yards and six touchdowns.

"I think with Nelson you see flashes of his ability," Roseman added. "He's an explosive guy why can create separation and, again, I think it goes back to everyone -- just on a day-to-day basis wanting to see consistency. And we have high expectations for Nelson and he has high expectations for himself."

As for when you can expect to start seeing DGB running around in midnight green, the 23-year-old is expected in Philly at some point Tuesday, but Pederson has already said he won't play in Thursday night's game in Pittsburgh, although he will travel with the team.