Santorum reads the paper, Wolf drives a Jeep and more 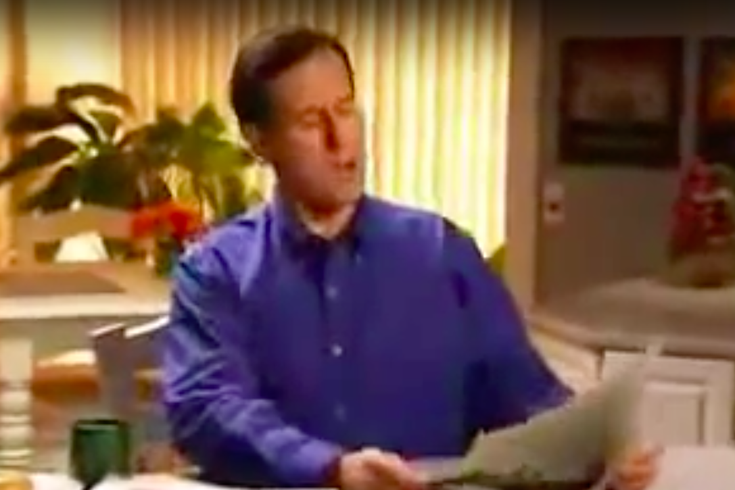 If you're registered as a Democrat or Republican in Pennsylvania, you'll (hopefully) be walking out of a voting booth sometime from 7 a.m. to 8 p.m. on Tuesday, April 26. And if you've been in front of a television sometime in the past month or so, you've likely seen a number of advertisements telling you who you should or should not have picked for a number of state and federal offices.

Campaign ads generally follow one of two formulas: dramatically optimistic and fawning over a candidate's credentials or painting an opponent as the unelectable villain. This election cycle in Pennsylvania has been no different. After you cast your ballot, take a break from the intensity of the campaign trail and look back at some of these quirkier ads run by candidates in the state from years past:

In which former U.S. Sen. Rick Santorum reads a bunch of newspapers (something he "loves"), one of which calls him too liberal, while campaigning to keep his seat in 2006. A noted social conservative, Santorum's supposed "liberal" fiscal policies have been used to attack him on other occasions.

In which former Philadelphia Mayor Frank Rizzo admits he, in the past, "said things he wishes he hadn't" while running for his old job in 1987. In the 2016 presidential race, Rizzo has been used as a comparison to Republican presidential candidate Donald Trump on several occasions.

In which current U.S. Rep. Bob Brady dishes on his plan to fight violent crime and create jobs to the tune of some smooth jazz while campaigning for mayor in 2007. He lost to Michael Nutter, but Brady still has a job in Congress and seems like he'd be a pretty cool Uber driver.

In which Charlie Kelly from "It's Always Sunny in Philadelphia" writes a campaign ad that, while essentially nonsense and gibberish, uses enough key words like "Democratic" and "lower taxes" that you can almost imagine it on television. Besides, wouldn't you want to vote for someone confident enough to say "I'm hot"? It's essentially working for Trump.