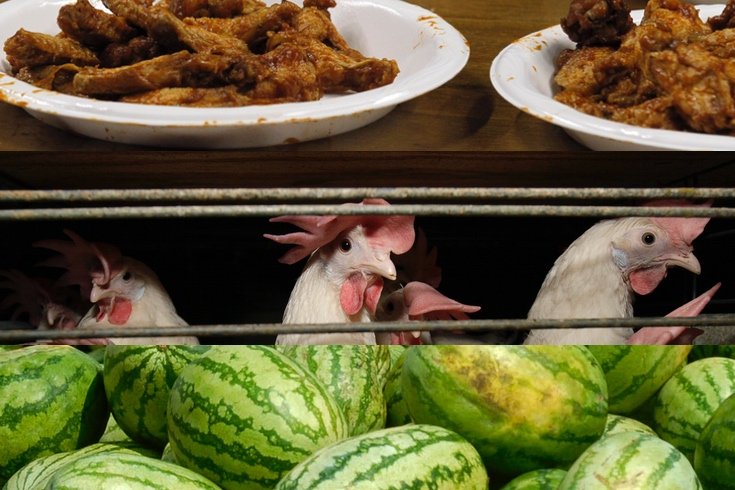 Chicken wings, live chickens and watermelons have all been props for pranks carried out by Philadelphia-area high school seniors.

Let's make something clear right off the bat: The author, and, therefore, PhillyVoice, do not endorse replicating any of the following shenanigans. So if you're a high school principal and find dozens of chickens roosting in your office tomorrow (more on that later), don't come to us. In fact, I'd urge seniors across the Greater Philadelphia Area not to try these class prank ideas at their schools; one of the worst things you can do is be unoriginal.

If you're seeking a silly but harmless way to go out before donning your cap and gown, take a cue from a group of Plymouth Whitemarsh High School seniors who recently put their school up for sale on Craigslist (read: fun, but no serious damage incurred). And most certainly ignore an Arizona senior who exposed himself in his football team's yearbook picture — he now faces criminal charges.

All that said, here are five of the weirdest class pranks from Philly-area seniors over the years.

(Disclaimer: Some of the videos and images in this article contain explicit language):

Haverford student fakes his own death

The 1970s were simply a different time, because if this had happened in the modern era, one can only imagine the type of trouble these kids would have found themselves in – not to mention the media coverage that would have swirled around The Haverford School in Delaware County. Per a 1988 Inquirer story:

At The Haverford School about a decade ago, a few 12th graders peered out a window of a third-floor classroom. "Oh my God! Johnny jumped out the window!" they screamed. Their study hall proctor flew across the room to see for himself. Sure enough, down below was poor Johnny. His blood-soaked, lifeless body was sprawled across the shrubbery. The teacher immediately summoned the dean and headmaster.

However, by the time they arrived at the scene, the body had disappeared. By then, Johnny was sitting quietly in the study hall. He had cleaned the lunch room ketchup from his clothing. One more senior prank had been completed successfully.

That teacher, known to students as "The Worm," subsequently "gave up teaching and took a job as recreational director of an old folks' home," said English instructor Barry Bergh.

Causing a faculty member to quit the profession altogether? That usually means your prank was more sinister than fun in nature.

The now notorious chicken run of the Northeast captured the attention of both the local and national media in 2008 when 85 of the animals were released within Northeast Philadelphia High School. Surveillance video captured the four pranksters on tape setting the chickens free after getting into the school late at night. According to reports at the time, the culprits left plenty of feed for the animals, meaning there was a $5,000 price tag for the cleanup. Interestingly enough, there's no record of the pranksters ever being caught. But don't take that as a reason to try this yourself: About a month after the Northeast incident, four students were suspended and charged for doing the same thing in New Jersey.

Luckily for the Northeast High chickens, they eventually found a home.

The above video recorded at Council Rock South High School during a 2015 prank sounds and looks more like a war zone than a friendly prank (my goodness, those blood-curdling screams). Principal Albert R. Funk said at the time he’s all for having some fun, but the prank got out of control and caused a “major disruption.” From a Patch article:

The watermelon was tossed during a class transition and the prank “grew unwieldy” when students started throwing the fruit in the library lobby, Funk said in the letter.

“It is extremely fortunate no one was injured,” the principal said, adding the district does not condone senior pranks.

The strangest part of this prank is that, on its surface, it doesn’t really seem to be a prank at all. When seniors at Malvern Preparatory School staged their own version of Philadelphia’s infamous Wing Bowl, the stunt got some love from the original event’s host, sports radio station 94.1 WIP. Yet, as Barstool Sports pointed out a year before the prank, officials at the private Catholic school in Chester County tried to strongly discourage students from attending the actual Wing Bowl’s annual showcase of Philadelphia debauchery. So, in a way, the “prank” served more as a clever workaround to soaking in a raucous competitive eating contest.

In 2014, some Boyertown High School seniors employed their landscaping abilities to turn some shrubbery that spelled the name of the school’s mascot — the Bears — into a word for a man’s genitals. If this one offends you, just remember, it could have been a lot worse.