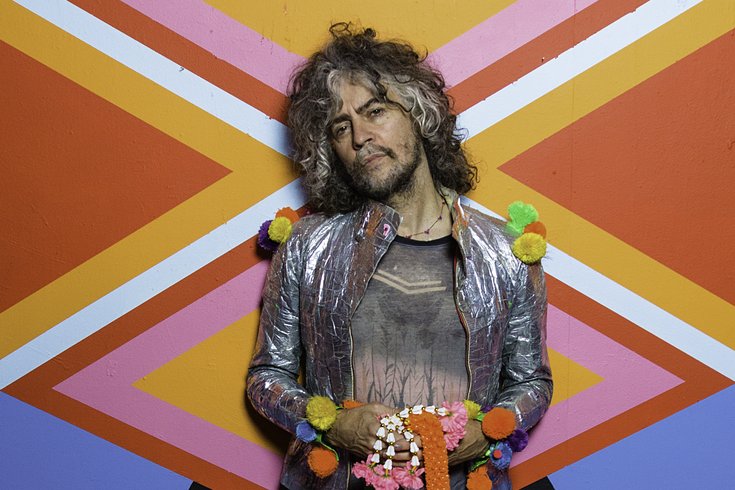 Wayne Coyne of The Flaming Lips, which will perform at the Parx Casino Xcite Center on Sunday, March 11, 2018.

A conversation with the Flaming Lips' Wayne Coyne is always as delightful as his band's psychedelicized output.

The oddball, acid-laced soliloquies that characterize Coyne's Mad Hatter aesthetic from the start are still part-and-parcel of what drives him.

The band's most recent album, "Oczy Mlody," ranks among Lips' classics including 1999's "The Soft Bulletin" and 2002's "Yoshimi Battles the Pink Robots."

Locally speaking, Delaware's Dogfish Head Brewery has a role in the Lips' upcoming single "Pouring Beer In Your Ear (The Beer Song)' and "The Story Of Yum Yum and Dragon." The band and brewery have teamed up for a beer-and-vinyl collaboration for the upcoming Record Store Day.

The songs were inspired by Dogfish's Dragons and YumYums tart pale ale, and the beer itself was used in the vinyl-pressing process.

We caught up with Coyne in anticipation of The Flaming Lips' always-spectacular live show at Parx Casino Xcite Center on Sunday.

Having grown up in a Polish neighborhood and seeing Polish language church services use the phrase, "Ozcy Mlody" is not a completely foreign notion. How does its translation ("eye young" or "eyes of the young") suit the album's actual dialogue?

You're the first person I have talked to who openly knows Polish and who would have even considered the record's dialogue.

The title seems to fit the sort-of unknown world of what the inside of the record is ... more than the interpretative world. So, to you? No, it doesn't mean anything. To me, it was a way of having a unique language that may have been spoken by a character in "Star Wars."

It is very open to interpretation, as long as you don't dig too deep (laughs).

The album comes across as this pure and lovely fairytale until you peel back the lyrics and find some of its more disturbing elements. The music is, at once, sparkly and spooky. Did you get your lyrical cues from what your co-writing partner, Steven Drodz, provided?

Definitely on some of them, say, a song such as "How?" which had this powerful sense of longing to it.

"We want to be hypnotized by our own creation." --Wayne Coyne

In a way, it almost didn't matter what the words were. Its emotional impact speaks for itself. It's almost like sleepwalking where you're not sure what's coming out – a poem or a song – but what is there is beautiful and haunting.

Sometimes, what I want to make sure of is that the lyrics are not too concrete, but with subconscious impact. Sometimes, a song is just a song and making something too conscious takes away from it.

Totally. It's evocative rather than specific. What connection do you believe "Ozcy Mlody" has to its immediate predecessor "The Terror"?

Part of the thing that we did with "The Terror" is that we put a limit on ourselves, which is something we usually don't do.

Sometimes, we work on a record for maybe a year and it takes on its own vibe. Maybe we add another vibe to that for a different brand of cohesion.

With "The Terror," we wanted it to very much be one type of record without veering into our normal sense of optimism. We always do. That's one of Flaming Lips' underlying superpowers. We didn't want that for the collection of songs that made up "The Terror." We wanted that to be anxious and despairing and even one-dimensional.

Is it tough playing those tragic tunes against the dreaminess of "Oczy Mlody" in a live setting?

No, because we usually invite you to hear songs that mostly you are familiar with, and that will allow you to have a good time.

It's a party, and when we decide to play newer songs, they usually fit in with the rest of the fun. You have to figure that, at this point, we have a lot of songs – something close to 30 records out. We want to be hypnotized by our own creation ... like waking up with blood on your hands and saying "Who did I kill last night?"

Do you believe that bloodlust existed from the start of long career, especially since you have a six-CD box set of early material "Seeing the Unseeable: The Complete Studio Recordings of the Flaming Lips 1986-1990" due out shortly?

I don't believe we would have even known such feelings could have worked - we were unaware - because we knew so little about music and recording. We were just so happy to be doing it.

It wasn't until the early 90s that we figured out that we could be absolutely primal punk rock as well as transcendent and beautiful and melodic with giant arrangements, that we could really go for it.

Let's move from your most distant past to your newest music, the upcoming Record Store Day (RSD) single "Pouring Beer In Your Ear (The Beer Song)" and "The Story Of Yum Yum and Dragon" which you did with our neighboring Dogfish Head Brewery in Delaware.

How did that come together and how did you guys manage to inject each record with their actual Dragons & YumYums brew?

The guy we dealt with at Dogfish, Sam (Calagione, the brewery's CEO and founder) is the identity behind all Dogfish stuff, and he felt we would be a good match in that we'd both want to do something outrageous.

We have done many special RSD records such as the gummy worm skulls, and those filled with human blood. He was aware of those, so that if we were going to do a record about beer, we should fill the vinyl with beer. Of course it was possible!

How does that happen, filling a record with fluid as such?

We went to Nashville and dealt with these manufacturers who work with Jack White on special vinyl editions filled with blue liquid. They hollow out an area in the middle where we could inject our blood or beer, then add a gloop of glue so that there is no leakage. They work. I still have a copy of the blood one in my refrigerator.

And are you a big beer guy, at least enough to pair the music with the ingredients?

No, I am not. Sam suggested doing a song that tied to the ingredients, but I have no idea about ingredients. So, he gave me a list of the 25 most colorful elements. How could you not consider dragonfruit and yumberry elements and come up with something whimsical?