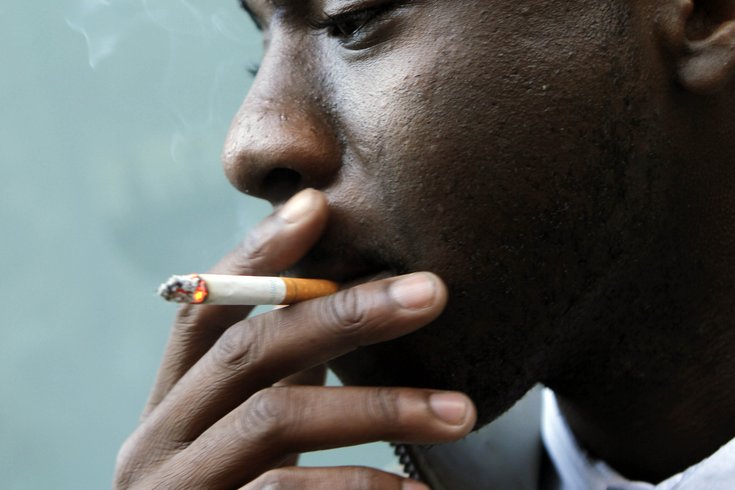 Samuel Johnson smokes a menthol cigarette outside while between classes at Harold Washington College in Chicago in November 2010.

As states and communities rush to ban the sale of flavored tobacco products linked to vaping, Carol McGruder races from town to town, urging officials to include what she calls “the mother lode of all flavors”: menthol.

McGruder, co-chair of the African American Tobacco Control Leadership Council, has tried for years to warn lawmakers that menthol attracts new smokers, especially African Americans. Now that more officials are willing to listen, she wants them to prohibit menthol cigarettes and cigarillos, not just e-cigarette flavors, to reduce smoking among blacks.

McGruder and other tobacco control researchers are using the youth vaping epidemic — and the vaping-related illnesses sweeping the country — as an opportunity to take on menthol cigarettes, even though they are not related to the illnesses.

“We started to see that vaping is something that we could leverage in order to deal with this whole menthol issue,” said Valerie Yerger, an associate professor of health policy at the University of California-San Francisco.

Menthol is a substance found in mint plants that creates a cooling sensation and masks tobacco flavor in both e-cigarettes and cigarettes. Those properties make menthol more appealing to first-time smokers and vapers, even as they pose the same health threats as non-menthol products and may be harder to quit.

Nearly nine out of 10 African American smokers prefer mentholated cigarettes, according to the Centers for Disease Control and Prevention.

But even as tobacco control activists see opportunity, some African Americans, including smokers, fear discrimination. They predict that banning menthol will lead to a surge in illicit sales of cigarettes and result in additional policing in communities that already face tension with law enforcement.

'IT'S SUPPLY AND DEMAND'

Joseph Paul, director of political and civic affairs at City of Refuge Los Angeles, a church with about 17,000 members in Gardena, Calif., spoke at a board of supervisors meeting in September against a proposed flavor ban in Los Angeles County that was adopted a week later.

If officials truly wanted to end youth vaping, he later told California Healthline, the ordinance should have targeted only vape flavors and exempted adult smokers and their menthol cigarettes.

The Los Angeles County ban prohibits sales but not possession of flavored e-cigarette products, menthol cigarettes and chewing tobacco in the unincorporated area of the county, inhabited by about 1 million people. Shops have until April to clear their shelves of flavored tobacco products.

Paul warned that people will start selling menthol cigarettes illegally: “It’s supply and demand.” That will make the community more vulnerable to police harassment, he said.

In New York City, when officials proposed a ban on menthol cigarettes earlier this year, which has yet to be acted upon, the Rev. Al Sharpton made a similar argument against the measure: Banning menthol would lead to greater tensions with police in black communities.

“I think there is an Eric Garner concern here,” the civil right rights activist told The New York Times in July, referring to the well-known case of a 43-year old black man who died in a chokehold in 2014 while being arrested by New York City police on suspicion of selling single cigarettes.

The flavor bans that are currently sweeping the country have more to do with e-cigarettes than menthol cigarettes.

That’s because a mysterious vaping-related illness has sickened more than 2,050 people nationwide and led to at least 39 deaths. In California, at least 150 residents have fallen ill and at least three have died, according to the California Department of Public Health.

Most of those illnesses have been associated with vaping cannabis products, and yet politicians’ urge to adopt flavored tobacco bans continues.

In July 2016, Chicago became the first major U.S. city to ban menthol cigarette sales, but it limited the prohibition to within 500 feet of schools.

Of the more than 200 communities in the country that restrict or ban the sale of flavored tobacco, fewer than 60 include restrictions on menthol cigarettes, according to the Campaign for Tobacco-Free Kids.

At the national level, the Food and Drug Administration banned the sale of flavors in combustible cigarettes in 2009, but exempted menthol. Last November, the agency proposed a ban on menthol-flavored combustible cigarettes, calling their use among youths “especially troubling,” but it has not yet taken action.

Then the Trump administration said in September it would soon ban all flavored e-cigarette products, but it may now be backing away from banning mint and menthol.

Menthol, which was first added to cigarettes in the 1920s, is as old-school as it gets when it comes to flavored tobacco, yet it hasn’t prompted action in the way that vape flavors such as cotton candy and strawberry-melon have. That’s because vaping was embraced by a specific population: affluent white teens, Yerger said.

McGruder and others point out that the tobacco industry has supported and funded civil rights groups and causes, forming relationships with prominent black leaders such as Sharpton. Big Tobacco acknowledged that it has contributed to Sharpton’s organization, the National Action Network, and similar groups.

McGruder said it’s difficult for the African American community to contradict respected male civil rights and religious leaders, so when they argue that menthol bans will lead to criminalization, the community listens.

But Bobby Sheffield, a pastor and vice president of the Riverside County Black Chamber of Commerce, said the criminalization argument is a scare tactic.

“We’re not trying to have anyone incarcerated because they have this product in their possession,” Sheffield said. His organization, which represents local businesses, started campaigning this year for menthol bans in California’s Inland Empire, including the cities of Riverside, San Bernardino and Perris.

Some smokers understand the need to keep tobacco out of the hands of children, but they don’t think it’s fair to include menthol cigarettes.

“It’s stupid. Now they’re trying to act like menthol cigarettes are the problem. These have been around for a long time,” said April Macklin of Sacramento, who smokes Benson & Hedges menthols. She smoked when she was younger, quit, and started again three years ago.

The city of Sacramento will ban the sale of flavored tobacco, including menthol cigarettes, effective Jan. 1.

Macklin, 53, said she might just quit because she won’t smoke anything other than menthol. But even with a ban in place, she doubts menthol cigarettes will be gone for good. “I’m sure people will figure something out,” she said.