Hextall got much-needed cap relief, and could be eyeing more 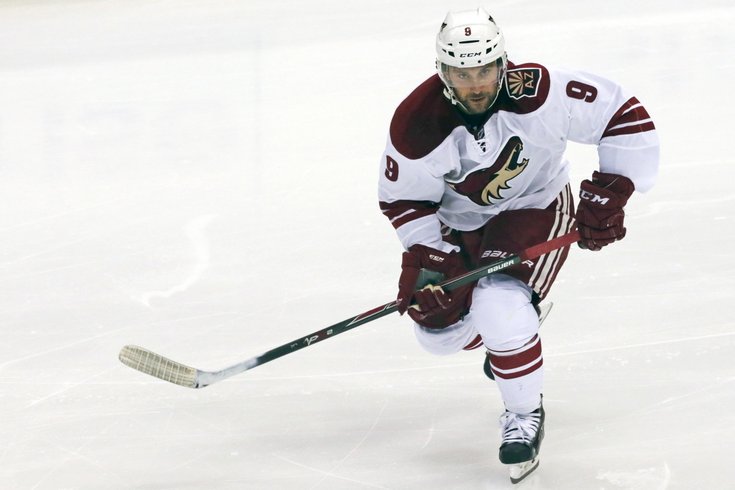 The Flyers have acquired center Sam Gagner from the Coyotes.

The NHL Draft had barely ended when the Flyers made their biggest move of the day, acquiring center Sam Gagner and a conditional 2016 or 2017 draft pick from the Coyotes in exchange for defenseman Nicklas Grossmann and the contract of veteran blue liner Chris Pronger, who last played a game in November of 2011.

MORE: Flyers draft Provorov, trade up for Konecny in first round

Prior to that trade, Gagner spent his first seven seasons with the Oilers, the team who selected him sixth overall in the 2007 NHL Draft. In 562 career games, he has tallied 336 points (116 goals and 220 assists) and 272 PIM. Eight of those points came in the same game.

Grossmann, who had long been rumored to be on his way out, played in 198 games for the Flyers over his three and half season in Philadelphia and notched 38 points (seven goals, 31 assists) and 118 PIM to go with his plus-six rating.

The key to this move, however, are the salary cap implications.

For the Coyotes, taking on Pronger's $4.9 million cap hit and $3 million of Grossmann's $3.5 million hit helps them get to the salary floor. For the Flyers, they shed two cumbersome contracts -- one of which was occupying their only LTIR spot -- and save $7.9 million* dollars in doing so.

*This doesn't count what they'll pay Gagner, but as you'll see, that's still up in the air.

The decision now becomes whether or not keep Gagner. According to Dave Isaac of the Courier Post, this deal was more about money than it was about the players involved:

The relief, not Gagner, is what the Flyers find most attractive in the deal. Gagner, 25, was rumored to be a buyout candidate for the small-market Coyotes. The Flyers haven't decided if they'll do the same or keep him.

"I don't have the answer for that right now," Hextall said. "We made a deal. We need to regroup in the next couple days. We're not out away from the top of the cap yet, so we've got some work to do here and we've got some decisions to make."  [courierpostonline.com]

Gagner carries a $3.2 million cap hit and will be an unrestricted free agent after next season. If the Flyers do keep him, they'd still be saving $4.7 million overall. If they decide to buy out his contract, according to James Mirtle of TSN, it will cost them one-third of his contract, or $633,000.

If Flyers buyout Sam Gagner, it will cost very little, even on cap. He's under 26 so they would only pay one-third of his salary.

If that's the route GM Ron Hextall decides to go, the team will have saved just under $7.3 million.

But the Flyers could decide to move him as part of another deal (and possibly not have to pay him anything), putting them back at the original $7.9 million (Pronger's $4.9M and Grossmann's $3M) in freed up cap space. According to hockeybuzz.com, the team had $6.9 million in cap space prior to the move, meaning that number could jump to as much as $14.8 million if they trade Gagner and $14.2 million if they buy him out.

That gives Hextall a lot of options -- and tons of cash -- heading into free agency, which begins on Wednesday.