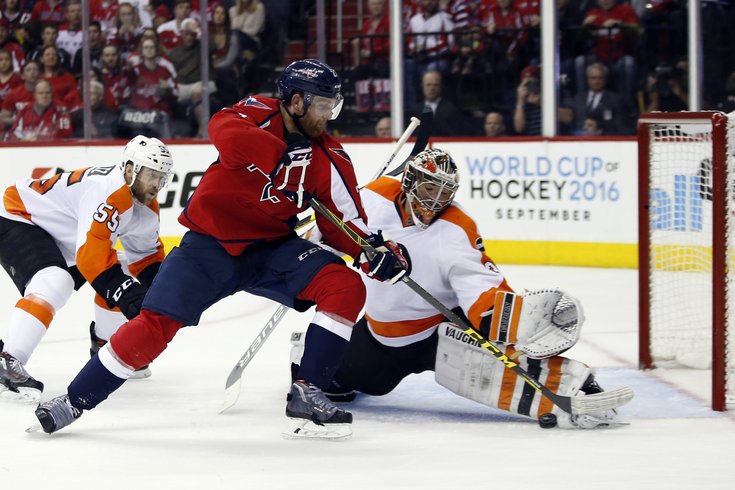 There's stealing a game, and then there's what the Philadelphia Flyers did to the Washington Capitals on Friday night.

Despite being outshot 44-11 in the game -- no, that's not a typo -- the Flyers were able to escape D.C. with a 2-0 win and force a Game 6 in Philadelphia on Sunday. Needless to say, goalie Michal Neuvirth stood on his head all night long.

It felt like the Flyers were playing shorthanded much of the game, even when they weren't, but when you have a goalie playing like Neuvirth did, it doesn't much matter.

On the flip side, the Flyers managed just 11 shots all game, a new franchise low.

11 shots on goal for Flyers tonight their fewest ever in a game, regular season or playoffs. Previous low was 13, 3 times, once in playoffs

Ryan White netted the go-ahead goal for the Flyers -- with the help of an opponent's skate -- in the second period and Chris VandeVelde added an empty-netter but this one was all about the goaltender.

•    There's not much else you can say about Neuvirth's play Friday night other than it was spectacular. He stopped all 44 Capitals' shots -- a career playoff high -- and came up huge time and time again, especially in the second period when he stopped 16 shots, 13 of them in the last 10 minutes. And he looked damn good doing it.

Okay, #Neuvirth has officially come back to haunt the #Caps #CapsFlyers pic.twitter.com/dPQUNgfcFm

With all the great play from Steve Mason during the Flyers' stretch run just to make the playoffs, you can't help but be surprised that Neuvirth is the Flyers' MVP so far this series. Not because he isn't capable, but because he was an afterthought for most of the final month of the season.

You have to start him in Game 6, right?

•    The second period was like a 20-minute penalty kill for the Flyers. Yet somehow, despite being outshot 16-2 in the period -- and 13-0 over the final 10-plus minutes of the period -- they were able to take a 1-0 lead over the Capitals thanks to White's goal. That came on the Flyers' first "shot" of the period, but as you'll see, the only reason it counted as a shot was because it wound up in the back of the net.

Ryan White with a greasy goal to open the scoring! pic.twitter.com/P7Nn9cHYzH

The #Capitals are outshooting the #Flyers 25-8 and have scored the game's only goal. Yet they're losing.

Through the first two periods, the Capitals held a 30-8 edge in shots, but still found themselves down entering the third. And when the Flyers' shooting drought finally ended with 13:28 to play in the game, they had gone nearly 17 minutes between shots.

•    Neuvirth didn't do it alone. Shayne Gostisbehere had a nice game, one game removed from scoring his first career postseason goal. There were two specific defensive plays that really stuck out, especially during a frantic third period for the Orange and Black:

Gostisbehere appears out of nowhere to dive and breakup the play. pic.twitter.com/lP1rbQGJtB

What a defensive play by Shayne Gostisbehere. pic.twitter.com/ZAWzjqxS5G

And on the offensive end, he came this close to scoring for the second straight game:

SO CLOSE after a beautiful move by Shayne. pic.twitter.com/WQyHRrGGy3

•    If Pierre-Edouard Bellemare got a game misconduct and a one-game suspension for his hit in Game 3, how does Jason Chimera only get a two-minute minor for this one on Jake Voracek?

•    The night got off to a physical start when Brayden Schenn and T.J. Oshie decided to drop the gloves just 10 seconds into the game and it stayed that way throughout. More on their fight, here.

The Flyers and Capitals will face off at noon on Sunday at the Wells Fargo Center.

You won't want to miss this one...