John Tortorella: It will take time to build the Flyers the 'proper way'

"You're gonna go through a lot of pain," the Flyers' coach said of the team's long-term trajectory, but he stressed that they need to "just stay with it." 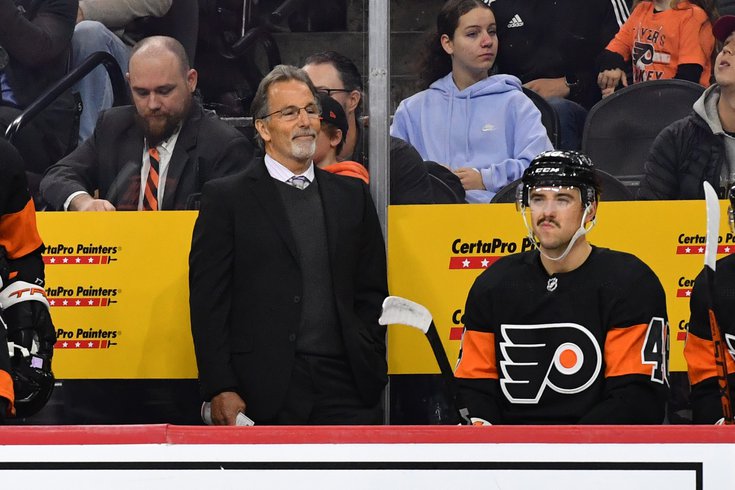 Flyers coach John Tortorella said Thursday morning that the organization is still in the very early phases of building something.

No one in the building is going to say "rebuild." Probably not publicly at least.

And ultimately, John Tortorella doesn't care how anyone labels his mission with the Flyers.

But, man...He sure did say a lot of rebuild-y things Thursday morning over in Voorhees.

For the first-year head coach, there doesn't seem to be any delusion as to where the Flyers actually are, not with an expensive and banged-up veteran core, not with a roster full of inexperienced youth still trying to find their way as pros, and especially not after the third winless skid of at least 10 games within a calendar year that only just got snapped Tuesday night against the Islanders.

The infamous "aggressive retool"? It's probably safe to throw that one out the window.

There's work to do, as Tortorella said from the beginning when he was hired in the summer, and it's going to take a long time.

There's going to be pain too. Tons of it.

But Tortorella isn't going to waiver. He's going to see it all through.

"I get people asking me 'How you doing?' and this and that with the losing and stuff like that. I love the opportunity that we have here to build something from, really, the ground up," he said. "When you're having some pain, and you're gonna go through a lot of pain, but when you start feeling that pain, do you change your thinking and panic and readjust how you're gonna go about it? That's the important part for us in this organization, is to just stay with it.

"No matter how much pain you're going through, stay with it, because when you get on the other side that foundation is gonna be strong. You're not gonna be knee-jerking back and forth. That's the way I'm going about it. And for some reason, if someone thinks different about it, I'm gonna argue because I think that's the best way to do it here, is to build it the proper way."

There wasn't much expected out of the Flyers this season anyway. They got off to a decent start, sure, but with a lineup lacking in high-end talent and offensive firepower, it wasn't going to be sustainable. You can only go for so long trying to outwork every single opponent on the schedule, and it catches up quick the second there's a mismatch in skill or run of injuries. The Flyers have been hit with both already.

After a free-agency period that underwhelmed in heavy part due to salary cap constraints, and compounded by some horribly timed offseason injuries and resulting surgeries, the tone within the Flyers noticeably shifted at the start of training camp. General manager Chuck Fletcher wasn't talking so much about having the team bounce back and compete, but more so about the opportunity for players to win jobs and how many skaters under age 25 the team could boast.

It's thinking for two, three, maybe even further than four years down the line, which was probably best to get started on sooner rather than later. The long-term conversations and evaluations, as Tortorella brought up, from within the front office on each player too, from "'Is he part of this? Do we want him part of it? Are we...You know what, he's not a Flyer. I just don't see him as a Flyer' and then you kind of work through it."

"And I do think that's where we're at," Tortorella said. "This isn't a one-year type of thing. We got some work to do. It's gonna take some time no matter what people want to hear. It's going to take some time to get this right.

"If we want to get it right, it's going to take some time."

"I'm not a big language guy," Tortorella said. "I like building. I like using building words. I like seeing things built, and I am thrilled that right now I have the opportunity to help there. As far as language, you can call it whatever the hell you want. I know how this coaching staff is going to go about it, and whatever word you want to use, you can use.

It's Throwback Thursday night against the Lightning later on, by the way.

MORE: Through give and take, Kevin Hayes keeps on going

Speaking of Fletcher, the Flyers' GM did meet with the media on Thursday as well and provided some injury updates.

• This one isn't a shocker, but Ryan Ellis won't play this season. Fletcher said at the beginning of camp back in September that the defenseman was out indefinitely and that if he did end up playing this season, "It'll be a bonus."

Ellis, who came over in a trade with Nashville two summers ago, played all of four games last season before being sidelined entirely with a vaguely defined series of "multi-faceted" lower-body injuries.

"I've never heard of an injury like this, it's very complicated," Fletcher said back at camp. "A torn psoas is a very significant injury for a hockey player, a very rare injury. We're doing the best we can and we'll just leave it up to the medical experts."

Fletcher also couldn't deny at the time the idea that Ellis' issues were career-threatening.

• Sean Couturier, who underwent back revision surgery in October and was marked out for another 3-4 months will have a checkup on December 12 and then another in early January. The Flyers won't know more until then.

• Cam Atkinson is day-to-day and seems to be nearing a return from an upper-body injury that has kept him out all season so far. He's been practicing again, but the specifics of the injury have been kept hidden the entire time. Fletcher wouldn't give any hints beyond it being something that was dealt with in the past, then deferred any further explanation on it to Atkinson himself.

• James van Riemsdyk (broken index finger) was set to see a hand specialist on Thursday and there's optimism that he'll be back soon now that he's five weeks removed from surgery and skating again after taking a puck to the hand. As a veteran net-front presence, having him back would be a huge boost for a struggling power play and the offense overall.