By the end of Thursday's four on-ice sessions, guys were gassed and legs were clearly heavy. At no point did a puck ever touch the ice. 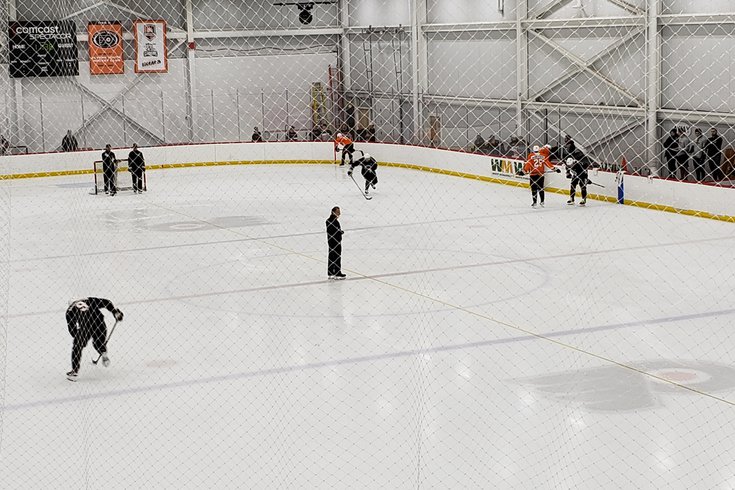 The Flyers skate laps around the rink at their training center in Voorhees while head coach John Tortorella directs from center ice during the first day of the team's training camp.

By the end of Thursday's four on-ice sessions, each about 45 minutes long and divided into different groups of players, guys were gassed and legs were clearly heavy. At no point did a puck ever touch the ice.

Bruiser and new signee Nic Deslauriers especially had a rough go of it.

"I looked at Nic Deslauriers today...We were probably two repetitions into the skate, and I went down to [associate coach Brad Shaw] and I said 'S***, Shawsy. I'm not sure what's gonna happen here with Nic,'" head coach John Tortorella recollected after practice.

The first-year coach wasn't kidding when he said this was going to be a difficult camp a few months back, but Deslauriers pushed through, all of the skaters did.

Day 1 was survived, and that's all Tortorella was really looking for.

"I watched that guy and he was ugly as hell, but he got through it," Tortorella said. "He never stopped, he finished to where he was supposed to finish, and I went to Nic after and said 'I hope some other guys saw that.' I don't care what it looks like, as long as the finish was there

"Those are important little things. It's not a goal, it's not an X and O or great defensive zone coverage. It's just a little mental toughness that he showed and I think that's something people need to draw off of."

With the Flyers' current outlook, the little things could prove monumental.

Shortly after the first on-ice session concluded, general manager Chuck Fletcher met with the media and didn't have the greatest news to share on an injury front that's already been full of rotten luck.

Joel Farabee is skating again and can participate in drills but isn't cleared for contact following his sudden neck surgery earlier in the summer. He's week-to-week.

Sean Couturier re-injured his back just before camp and while the team also has him listed as week-to-week and sought out a second opinion, initial speculation was that he could miss significant time.

"Ryan Ellis is out indefinitely," Fletcher said. "No timetable for his return to play. I'll just say that my assumption is he won't play this season. If he does it'll be a bonus."

When it came to Couturier and the team's depth at center in particular, Tortorella didn't want to speculate on what that could mean for the roster makeup. He wanted to wait and see what the second opinion brought, and at this point, said he doesn't know what the team is going to look like.

He didn't want to entertain the outside noise either.

Taking over following a disastrous season where nearly anything and everything went wrong, he and the Flyers are well aware of their current standing among fans. They also realize that talk does little to change that.

"There are enough things to worry about especially as we start camp to not even be concerned about that," Tortorella said. "I get it. Listen, we make our own bed. I know it has to go down that road, but you ask me...We can't change your perception by me talking to you or the players talking to you. We can't change perception of what you feel about us. The only thing we can do is put our heads down and work, and change perception by how we present ourselves."

Youth stepping up will play a huge factor in that, an aspect Tortorella and Fletcher were both adamant about on Thursday.

Fletcher said that depending on the way camp plays out, up to 10 players 25 or younger could crack the opening night roster.

Tortorella: "I'm gonna play the kids, I'll tell you that right now. It doesn't matter to me. Stature, draft pick, whatever it may be, what you've done before, it's kind of a clean slate with me because I really don't know the players. I need to watch them.

"But I do feel as an organization right now, we need to get a foundation underneath us here. We need to get it back on the rails and we need to get a good foundation of what are kids are. They're gonna get every opportunity. I'm not gonna be afraid to put them in situations that maybe might bump another guy out that thought he was gonna be there. I think it needs to be a little bit of merit here as far as where everybody stands."

Wade Allison is one of the names looking to run with that chance. The 24-year old winger has been on the bubble of cracking the NHL roster for the past couple of years, but injuries stopped him short at every turn.

This time he's fully healthy, and like Deslauriers and the rest of the camp roster, was pushing through the first day of Tortorella's merciless skating drills.

"It was a test of cardio for sure but by the end it's just about willing yourself through it," Allison said. "You gotta put your head down and work as hard as you possibly can... It's no longer about cardio at the end there, it's just simply your will to finish, your will to push yourself to the absolute max every time you're out there for every second you're out there."

That was just Day 1, with the promise from Tortorella that harder days are ahead. But with the Flyers, that looks like it's just going to be par for the course.