Team will wear special uniforms for 12 games in Philadelphia 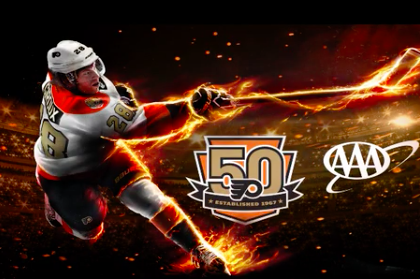 As the Philadelphia Flyers organization turns 50 years old — sadly, without the late Ed Snider present — the team on Wednesday released a new gilded uniform for the upcoming season.

See the 50th Anniversary jersey from every angle 👀 → https://t.co/YFLdSwHvh7 pic.twitter.com/SZqWrafi5n

At a skyscraper press conference at One Liberty Place, Flyers President Paul Holmgren presented the new jerseys, which he said were designed and finalized with the approval of Snider late last year.

The only truly discernible differences with them are the gold numbering and trim, the 50th-anniversary patch, and the patterns of orange, black and white — not to say there wasn't a careful process to perfect them. Holmgren said between 10 and 12 designs were considered in all.

For a special jersey that will be worn during 12 home games this year, the immediate fan reaction (negative, clearly) was really just practice-complaining for when there's more to complain about. This graphic is so cool it got three whole A's! Who would want to be such an A-hole about this jersey?

We’re working with the @NHLFlyers to celebrate their 50th anniversary. Check out their specialty 50th jerseys! pic.twitter.com/9h8Fd7n3IR

The main reason not to like these jerseys has to be a distaste for the color gold. A few fans think it's too Penguin-y.

Not only is this jersey trash but the Flyers took the Pens gold color a year after they got rid of it bc it was so bad.

Those Flyers jerseys look like the old Flyers jersey and the old Pens jersey had a demon baby that moved to Vegas to be a *star*.

Even the Penguins do...

WTFF?? Somebody is getting fired @NHLFlyers #Flyers. They had a top 3 jersey yesterday......

Maybe the announcement itself got people cranky. As PhillyMag's Dan McQuade noted, the press conference was delayed because Claude Giroux allegedly got stuck in traffic. (Look, at least he didn't miss a game, like all these heroes once did).

Flyers jersey reveal delayed — someone’s stuck in traffic. Based on who’s scheduled to be here it’s either Claude Giroux or Ben Franklin.

I’m at the big Flyers jersey announcement at the observation deck. These old game-worn jerseys are pretty cool. pic.twitter.com/Ph6yyASN2E

In today's warp speed social media climate, general impressions can quickly take a turn for the better, though. Within a few hours, people started to like the jersey.

The more I see the new Flyers jersey, the more I like it. I sure shot from the hip earlier and I regret certain words.

I don't think the jersey is that bad *ducks*

I don't get why everyone is hatin on the #Flyers 50th jersey! It looks good

And most importantly, the Flyers themselves seem pleased.

The anniversary jerseys haven't yet appeared on the Flyers' official team shop, but those who purchase 50th Anniversary Season Ticket Memberships will get one with the package.