In a public statement that reads like a gossip column, a couple's divorce gets far-reaching attention 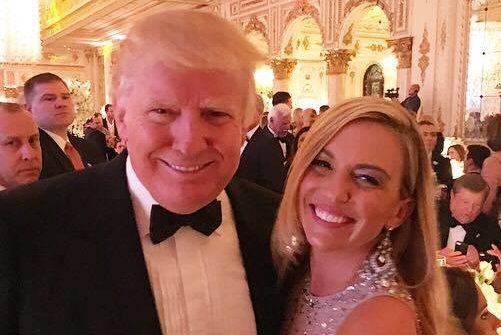 Lynn and Dave Aronberg, a former cheerleader for the Miami Dolphins and a top Palm Beach-area prosecutor, respectively, announced their divorce after a two-year marriage in a statement last week.

“After much consideration over the past few months, we’ve decided to respectfully and amicably part ways and end our marriage,” the statement reads. “We are, however, dedicated to remaining close friends. We kindly ask for your support in preserving our privacy as we start to navigate this new chapter of our lives.”

Though this sounds like pretty standard “conscious uncoupling” verbiage, the divorce took a turn for the sensational after claims that the split was somewhat due to Lynn’s political support of Donald Trump.

The source for much of this gossip? The statement itself.

The divorce announcement, released in conjunction with TransMedia Group – of which Lynn is listed as an executive vice president – then bizarrely outlines the couple’s assets and relationship in a way almost echoing that of a gossip magazine, noting their marriage began “with a proposal at the Eifel Tower 23 months ago” (sic) before diving into the nitty gritty of the divorce.

In fact, much of it sounds verbatim like an article by Gossip Extra, which has covered the Aronberg marriage in the past.

“The deal calls for [Dave] Aronberg, 46, to pay for half of Lynn’s rent in a luxury Boca Raton condo until next summer. She’s also reportedly getting a brand new BMW and $40,000 cash,” the statement reads. The next graph then notes Dave’s potential run for U.S. Congress.

“A staunch Republican and supporter of President Donald Trump, Lynn also said she felt increasingly isolated in the marriage,” the statement ends.

It’s an undoubtedly unusual way to announce a divorce, hashing out the factors that contributed to the decision, and since the statement was released Thursday, attention on the couple has only heightened speculation and gossip about the so-called “Trump Divorce.” It has even reached The Times of Israel with the headline, "Donald Trump drove apart this Jewish couple."

The Washington Post reported that their political differences “weren’t an issue at first,” according to Lynn, but worsened during and after the 2016 presidential election. Lynn is a reported long-running fan of Trump and even named her dog Ivanka.

At fundraisers and other high-profile functions, the couple often frequented Trump’s Mar-a-Lago, which became an issue as Dave tapped into his liberal following amid the growing power of Trump’s political messages. Lynn’s Facebook page is scattered with photos taken with Trump and his wife Melania.

The Washington Post said Lynn, who now works in PR, has no problem with how TransMedia announced the divorce, even if some of the statement was verbatim echoing sites like Gossip Extra.

"I trust them," Lynn reportedly said of TransMedia. "I don't care if they're just repeating something Gossip Extra already said."