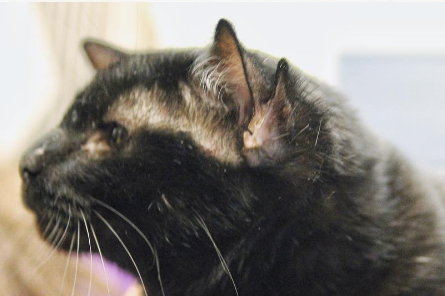 This cat with four ears, named "Batman," was adopted from a Pennsylvania shelter.

A cat at a Pennsylvania animal shelter with four ears didn't need nine lives, just one home. After the feline's story went viral, it got one.

The Western Pennsylvania Humane Society said Tuesday they were looking to give the three-year-old cat, known as "Batman" because of a rare genetic mutation, a "forever home."

Batman had previously been unavailable for adoption because of an upper respiratory infection (which wasn't related to his extra set of listeners, mind you), but was now feeling better.

It didn't take long for Batman to find a lair. ABC News reported that shortly after the shelter posted to Facebook about the cat, he was adopted.

A mother and her young daughter decided to take Batman in. The best part?

"It was fitting because the little girl liked superheroes," Caitlin Lasky, spokesperson for the Western Pennsylvania Humane Society, told ABC.