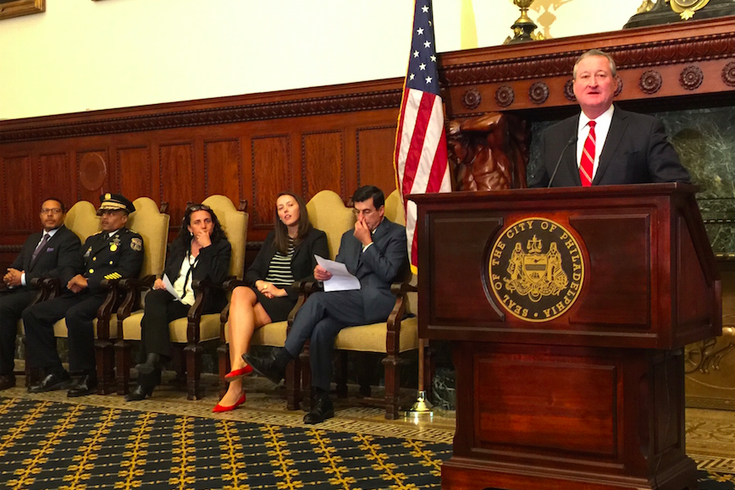 At a Friday afternoon press conference in City Hall, Philadelphia Mayor-Elect Jim Kenney introduced four members of an administration poised to take over after his inauguration on Jan. 4, 2016.

“I’m very happy to make these appointments today,” Kenney said after sharing some brief biographical information about the quartet and turning the mic over to DiBerardinis.

"We'll have an administration that looks like the city," he continued, noting that he expects to see much more collaboration between the city's departments when he takes office.

DiBerardinis, who has known Kenney for decades, said he and his wife have a “deep commitment” to serving both inside and outside of city government. He also said he has “a deep respect” for the workforce.

Kenney noted that the managing director's role will be a strong one in his administration, saying his leadership style leans toward “managing in general” as opposed to micromanaging, which he said is what the City Charter intended.

“I want to start today,” said DiBerardinis. “I know government works best when it’s deeply connected to the citizens it serves. … If we don’t connect to citizens in what we do every day, we’re not doing our jobs right. This is a high value, one I think this administration will carry forward.”

He then ceded the podium to Slusser, who spoke about the “unprecedented coalition” that both helped get Kenney elected – as campaign manager, it was a topic with which she is well-versed – and will guide their working philosophy “to move Philadelphia forward.”

It was then Mahler’s turn to speak:

“I truly believe, Jim, that you are poised to move this city forward,” she said. “The hours are long, but we truly love what we do.”

From there, Hackney recalled the first time he met Kenney, specifically that the latter noted that he thought the former could turn the troubled South Philadelphia High School forward.

“I understand the generation impact of education,” he said. “Our job is to make sure the children of the city get that same opportunity. I’m ready to start now, but the district won’t let me go yet.”